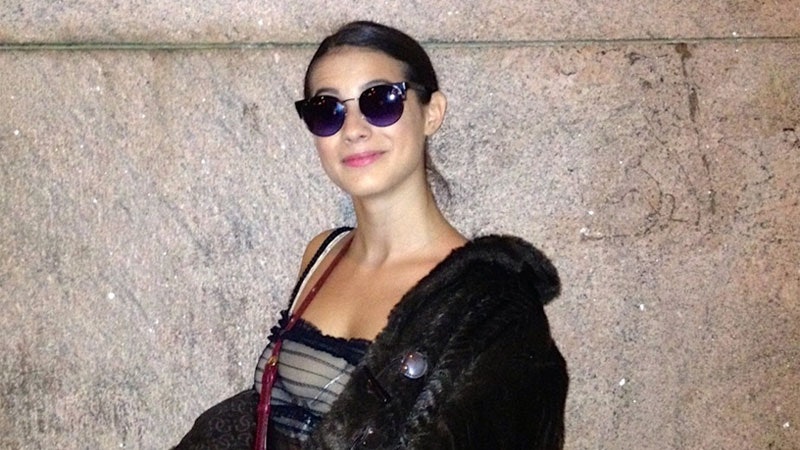 Want to sort out your true friends from the pretenders? Just tell them you want to go to a bar wearing a third boob, Jasmine Tridevil style, for the sake of journalism, and see who suddenly stops texting. Lest you've already forgotten about Tridevil, the most intriguing Internet hoax of last week, here's a quick refresher: Her real name is Alisha James Hessler, and she made headlines for purportedly dropping so much money to have a third boob wedged between the usual two via plastic surgery:

The massage therapist from Tampa, Florida, claims to have spent close to $20,000 to have an additional breast implanted between her other two in an effort to make herself less attractive to men. In an interview with Orlando radio station Real Radio 104.1, Tridevil notes that she reached out to over 50 doctors before one agreed to perform the surgery.

Judge me if you must, but I was deeply disappointed to learn that the whole thing was just a ruse. I was fixated on the possibility that a third boob might, in fact, get random men to lay off, and really wanted to see how that played out. I'm the type that hates little more in this world than a skeezy advance from a male stranger when I'm just trying to get my drink on.

Bearing this in mind, I decided to do what Hessler only pretended to: I dropped $20K on third-boob surgery to see if men would really leave me alone forever.

HAHAHAHA no, kidding, kidding, I did not do that. I did, however, fashion a sort of makeshift, sock-stuffed-à-la-Judy-Blume-book third boob, which I wore out in New York's overcrowded Times Square. After some sheepish wheedling, I managed to get two friends to join. (They were visiting me during the weekend I attempted this, and you don't mess with the person who shelters you. Thanks, guys!)

BUT HOW DID THE MENFOLK REACT? Read on to find out...

One strapless bra, folded in half

One sock (or more, depending on how buxom you are)

One sheer négligée, repurposed as a Going Out Top

One pair of sunglasses (because the sun never sets etc.)

I feel that I must be upfront about this: My third boob did not look nearly as legit as Jasmine Tridevil's. Mine was much subtler... and much more ramshackle. (This is a perfect example of how Photoshopping creates unrealistic expectations about bodies , people!) I considered buying an expensive, lifelike prosthetic for the purpose of this article, but that seemed really tacky with breast cancer awareness month around the corner. No matter, my hokey little lump still turned heads.

My friends wanted to walk through Columbia University on our way to the subway, so I gave the triplets a little test run on campus. For each double-take — and indeed, there were a fair few, even in the dark — there were 10 more students who walked by without so much as a glance. Millennials! They're so self-absorbed.

Also around this time, I decided that this story would probably earn me a Pulitzer.

We got on the subway, where all of my bravado flew out the window. I couldn't stand the thought of SITTING STILL for so long with a third boob out for all to gawk at. I wrapped my coat tightly around myself, and kept it latched shut until we arrived in Times Square. I loosened up a touch for that...

... and I honestly don't think anyone even noticed, especially with my coat still slung over my shoulders. There's much weirder stuff in Times Square, ya know?

We found a crowded bar a few blocks up and planted at a high-top table, right in the center of the action. I shrugged my coat off my shoulders and tried to look alluring. When two Long Island-y looking girls (no real judgment, I'm from New Jersey) started giggling at me and taking photos, I wriggled the coat back on and ordered a milkshake with alcohol in it, because I have no coping mechanisms and am not a true Gryffindor.

(In college, did you ever read Julia Kristeva's theory of abjection? I don't think I ever really understood it until tonight. This Long Island girls episode certainly constitutes an unbearable encounter with the Real.)

Half a milkshake and several verses of "Country Roads" later, I was persuaded to take off my coat...

And, though we hung around for at least an hour, nothing crazy happened! I was doing my best to look approachable, too. But aside from a guy at the bar furrowing his brow in the general direction of my cleavage, and the occasional passerby twitching just a bit, nobody bothered me!

Emboldened by this experience, I left my coat off during my walk home. (I don't have a photo of this; just imagine a tri-titted babe sauntering with the utmost confidence through the streets of New York.) And while plenty of guys stopped and swiveled back, "huh???" expressions writ large across their faces, only one guy actually catcalled me! Or he asked if I wanted to buy coke. It's unclear; he was kind of mumbly about it.

Now, a third boob does not ward off unwanted attention altogether, if you, like me, consider laser-focus staring and whiplash-y neck-cranings to firmly inhabit the "unwanted attention" camp. BUT. I feel confident in saying that the many and diverse men of Times Square, and perhaps, therefore, the world at large, do not seem desperate to hit it with a Tridevilish minx!

I mean, yes, this was definitely the most my boobs have been stared at on the street in awhile — I am not exactly Jessica Rabbit over here — but judging by the dumbfounded expressions I encountered, it wasn't because dudes found three cans a marked improvement over two.

A round of applause, then, for Hessler, for totally calling it. Hoax-girl power! As for me, I've returned to my two-boobed life... for now. But who's to say what the next night out on the town will bring into my brassiere?

More like this
25 Inspiring Quotes From Black Women To Celebrate Black History Month
By Kyli Rodriguez-Cayro and JR Thorpe
Ashamed Of Your Screen Time Stats? Here's How To Change That
By Alexis Morillo
Learning To Love, Not Judge, The Lunchbox Wives Of TikTok
By Esther Zuckerman
How To Turn Off TikTok Profile Views So You Can Stalk Other Accounts In Secret
By Alexis Morillo
Get Even More From Bustle — Sign Up For The Newsletter
From hair trends to relationship advice, our daily newsletter has everything you need to sound like a person who’s on TikTok, even if you aren’t.