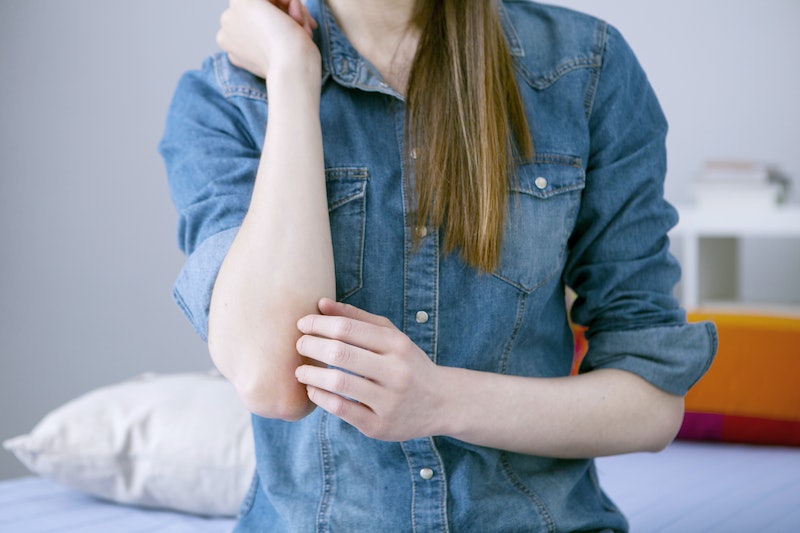 According to New Orleans dermatologist Dr, Deirdre Hooper, psoriasis is a chronic skin condition that affects 2 percent of the population. It’s not to be confused with eczema, though, says Dr. Elizabeth Tanzi, located in Washington, DC. “Eczema can look similar but has different causes. Psoriasis is due to a genetic predisposition and has to do with the skin’s ability to regulate itself.” There’s also a misconception that it is contagious, which Tanzi says is completely untrue.

Psoriasis is a skin condition that often runs in families, Tanzi says. “Some have it in small patches, some people have it widespread. You’ll see big plaques of flaky skin, red on the bottom and silvery-white flakes on the top.” The most common spots? “Areas of trauma that get bumped a lot — elbows and knees, as well as commonly on the scalp.”

While a cure for psoriasis hasn’t been found yet, there are treatment options that provide significant relief, as viewers of Keeping Up With the Kardashians may have learned in Season 6 when Kim is diagnosed.

Long-term psoriasis gets worse if you are obese or smoke, Hooper says. “If it is worsening, you should look at your lifestyle and ask if you’ve been smoking more or eating worse.” Likewise, she says a change in stress and hormone levels can also cause the condition to inflame.

“If you are stressed and your psoriasis is flaring, take some time for yourself,” Hooper says. “Yoga or meditation — neither is proven to be better than the other, just look for a way to alleviate the stress.”

According to Hooper, an ointment is more effective than a cream because of its ability to penetrate your skin better. “While they can be messier, you get a much better result,” she says. “If you have psoriasis on a thicker area of your body like your elbows or knees, take a Saran Wrap after applying the ointment and wrap the skin for two or three hours.”

Just like a nasty blemish outbreak, your dermatologist can administer an injection of cortisone to speed up the healing process. “We can give a low dose injection into the psoriasis plaque, [which] helps them to fade more quickly,” Hooper says.

For more severe cases, controlled UVA or UVD rays can help symptoms. “It’s an effective treatment for people whose psoriasis hasn’t improved with topical treatments alone,” Hooper says. Tanzi adds that it involves several treatments and additional maintenance treatments following. “This isn’t something you can go out and do on your own though,” she says. “You can’t just go out in the sunlight [for relief], light therapy involves a concentrated type of light.”

More like this
6 Asian Beauty Rituals That Will Soothe Your Skin, Scalp & Mind
By Jennifer Li
Kim K, Oprah, & Jennifer Lopez Celebrated 25 Years Of Anastasia Beverly Hills
By Olivia Rose Rushing
Kylie Jenner Rocked A Very Kim Kardashian-Esque Outfit At Couture Week
By Allie Fasanella
13 January 2023 Beauty Launches Our Editors Can't Get Enough Of
By Rachel Lapidos
Get Even More From Bustle — Sign Up For The Newsletter
From hair trends to relationship advice, our daily newsletter has everything you need to sound like a person who’s on TikTok, even if you aren’t.