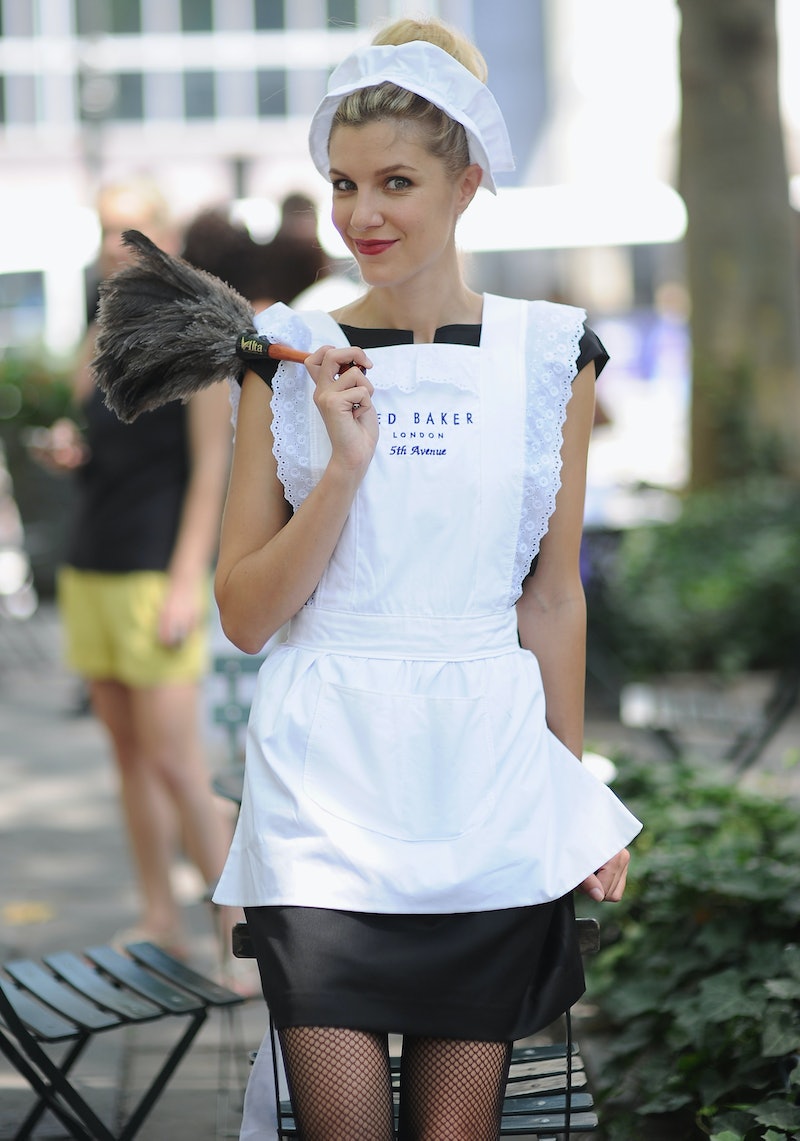 From a purely economic standpoint, there's really no point in you and your significant other spending money on a couples Halloween costume that can't be used in the boudoir, too. This coming from a person who thinks the "Halloween means slut time" ethos — so astutely articulated in Mean Girls so many years ago — is dumb as hell. But at the end of the day, if I am to spend my hard-earned cash on a novelty costume, that money's not going to a Frozen gown. Please. I'd much rather invest in something that's really worth my while, by which I mean something that's guaranteed to result in two orgasms, minimum.

Furthermore. I expect anyone I date to share my values and stance on this matter. If I'm doing a couples costume, believe you me, it will be a couples costume with ulterior motives and late-night payoff. And I'm not just talking, "You look hot, let's bone" payoff. I'm talking legitimate, hot-and-heavy, role-playing payoff. After all, the whole reason this holiday is fun is that you get to be someone else for a night! Well, that and copious amounts of drinking, but let's celebrate the former. With that in mind, I've rounded up these 10 couples costumes that transition seamlessly from tequila shots with your friends to role playing at home.

It's possible that this is just my personal fetish? Whatever — it's clear that these two have the best sex ever. Plus, this costume is crazy easy. I like a man in a baseball cap, a red wig and a tank top are sultry without trying too hard, shades block the haters, and a whistle 'round-the-neck keeps things bossy.

It would be weird if you DIDN'T have sex after spending the night contorting yourself into lewd poses for your friends' amusement. Don't let Cosmo down.

A little predictable? Admittedly. But will you both look damn good? Indeed, you will. Per image above, you can add cat ears if you want, because WHO CARES THAT IT MAKES NO SENSE. It's Halloween, people.

4. Pretty much any two gods from ancient Greek mythology

Drink like Dionysus at the party, holler, "MAKE me your Aphrodi-iiiiii-te" over and over for the entire cab ride home, and dirty talk like Hermes when you finally get down to business. (Hermes was the god of communication.) (Yes, I am using Wikipedia for this).

OK, don't judge me, but I just saw the preview for 50 Shades today (yes, just today), and it looks like it's going to be fairly sexy. Here's how you recreate the look: lady dons a sad cardigan and, like, a collar or some such, dude suits up, you both crack lame jokes to friends about how he's really the "whipped" one for agreeing to go for this costume pairing, and you get up to some bona fide kinky stuff later. It's all too easy, my friends.

If you're into '90s-inspired Halloween costumes, this one is for you. If you're dating a dude, he can be Darien; if you're with a lady, you have a whole crew of Sailor babes to choose from. (And, yes, the schoolgirl fetish is baseline creepy... You can totally disagree with me on this, but my personal sex philosophy is best put by xoJane's Emily McCombs: "My orgasms are a politics-free zone.")

Even if you did not have the good fortune of starring in your summer camp's rendition of this mid-century Doris Day musical like I did, you can still appreciate the concept: one half of the couple wears pajama bottoms, the other wears a pajama top. That's Doris, rocking half the look above. Brownie points if you can keep a straight face while announcing this costume's retro tagline: "Married life is lots of fun. Two can sleep as cheap as one!"

Mad Men is always a favorite when it comes to picking out couples costumes; I would merely like to add that it's basically irresponsible to dress up like Joan Holloway and not get dominatrixy.

9. Sandy and Danny from Grease

Awww. Come on, this is a classic.

Yep, we're talking threesomes now. And this ménage would be hot — like, "Shit, I took a bite too fast and now the roof of my mouth is BURNING, OW" hot. You know what to do if you're the housewife or delivery boy; if you're the pizza, expect to get a lot of oral action. Nice.

More like this
23 Super Sweet Things To Write In A Valentine's Day Card
By Karen Belz and Lexi Inks
Here’s What TikTok's "Mascara” Trend Is *Really* About
By El Hunt
The 3 Zodiac Signs Most Likely To Get Married Later In Life
By Kristine Fellizar
4 Zodiac Signs That Will Take Forever To Admit They Like You
By Kristine Fellizar
Get Even More From Bustle — Sign Up For The Newsletter
From hair trends to relationship advice, our daily newsletter has everything you need to sound like a person who’s on TikTok, even if you aren’t.