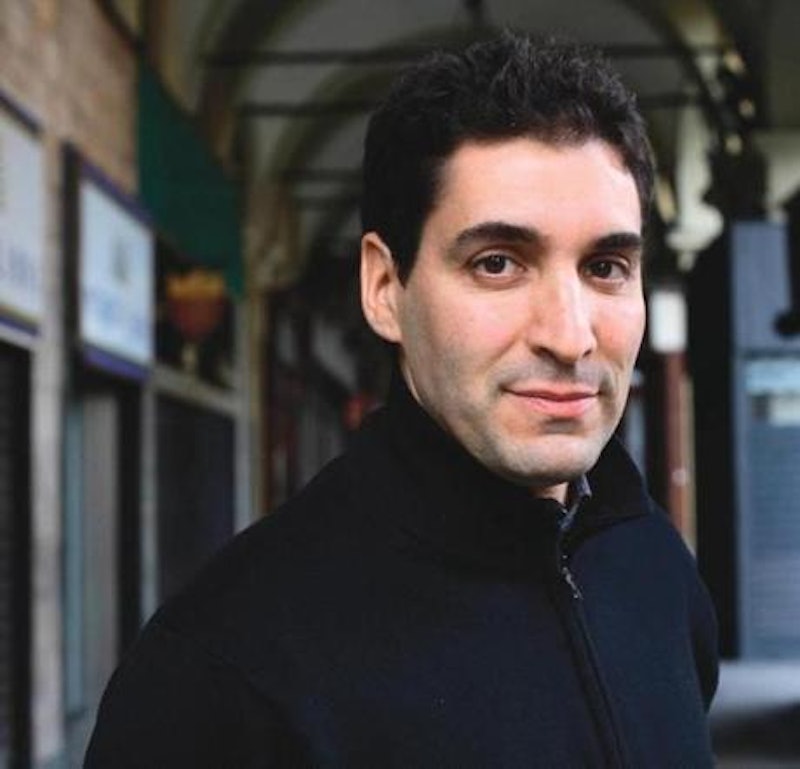 What Saïd Sayrafiezadeh accomplishes in Brief Encounters with the Enemy (The Dial Press) is extraordinary — that is, he gives a compelling, truly believable voice to the utterly ordinary. The Whiting Writers’ Award-winner manages to nail the essential realness of real life in these eight interlocking short stories, all centered on a nameless American city embroiled in a nameless overseas war.

Each story presents a distinct narrator, and their shared locale connects the dots from chapter to chapter. Sayrafiezadeh drops the occasional weather-themed hint to create the impression that the reader is getting a different view of the city from season to season, while the slight geographical differences within (or around) the city are delineated in print by call-center employee Zeke, who describes “frozen landscape of the city” — and the settings of each chapter — on his train ride to work:

Outside my train window, the frozen landscape of the city passed by, the suburbs first, then the schools, the factories, the warehouses, Walmart and Kmart, the fix-it shops, the scrapyards, the ghettos, and finally, thirty-two minutes later, coming fast over the bridge, the office buildings would appear…This was the great progression of civilization.

From the suburbs to the fix-it shops to the office buildings, the characters who inhabit each are all realistically fleshed-out and inherently likable — or, at the very least, pitiable. Rex floats in and out of his cartography job at a design studio, unnerved by his boss’ attention but in need of a steady income; Dean feels burdened by his friendship with an illegal immigrant, until the unthinkable happens; a janitor with a withered arm refuses to be defined by his deformity, and strikes up a romance with a kleptomaniac customer; and in the titular chapter, a restless soldier gets a glimpse at the long sought-after “enemy.”

By omitting the name of the city and leaving details of the looming war shrouded in mystery, Sayrafiezadeh makes the stories feel both larger than life and closer to home, revealing of human nature on a macroscopic and microscopic scale. The war that threads through each short story serves as a fitting backdrop for Sayrafiezadeh’s spot-on illustrations of human behavior, as everyone resorts to familiar clichés because no one — not even the soldiers hunkered down in the trenches — has any idea what the hell The Whole Point of the war is anyway.

Jake spoon-feeds cautious acquaintances clichés such as “I’d do it all over again” when asked about his tour of duty, and they reply with the equally hackneyed line, “Thank you for your service.” Zeke, envious of the attention heaped upon a recently-returned co-worker, impulsively enlists in the army and finds himself on the receiving end of the overused “We’re proud of you!” mantra. “Everyone was proud of me,” he notes. “The commuters on the train were proud of me… My landlord was proud of me… Everyone at work was proud of me… When the phone rang, I imagined that the people on the other end were proud of me…” And in an attempt at levity — because stabs at sincerity only serve to exacerbate the deeper feelings of mortal terror — citizens resort to the flippant catch-phrase, “Go kick some ass!”...as if the war were merely a game of “Capture the Flag.”

The soldiers themselves feast on these platitudes, and the narrator of the titular story at the heart of the book reveals that he “felt less like a soldier and more like [he] was going trick-or-treating dressed as a soldier.” He talks about enlisting in the army “for the right reasons,” but then does a 180 and admits that “none of us had joined for the right reasons” — and it is implied that no one even knows what the “right reasons” are.

It is a testament to Sayrafiezadeh’s delicate prose that these scenes come across as touching rather than trite. We get the impression that these characters are struggling to make sense of a nonsensical world in whatever way they can. Even apart the thematic overtones of war, Sayrafiezadeh’s probing view of humanity is comfortingly familiar: When Dean, stuck in traffic, urgently wills his bus to move forward by “tensing and twisting and leaning forward like a bowler who imagines his body language can influence the trajectory of the ball,” it is impossible (as someone who admittedly does this all the time) not to grin appreciatively. It is equally difficult not to understand the profound sadness caused by Ike’s memory of his high school valedictorian’s condescending graduation speech, as he considers the disappointing notion that he will never be the speaker, but only ever the “addressee.” And who in this day and age doesn’t relate to bright-eyed Nick’s equally strong compulsion to “check [his] teeth and… check [his] email” all in the same breath?

In Brief Encounters, Saïd Sayrafiezadeh brilliantly captures the banality of everyday life, with all of its small-scale triumphs and failures. Each character within each story is imbued with a realism that is both refreshingly unique and comfortingly familiar, as Brief Encounters with the Enemy cuts to the very heart of the lost, vulnerable nature of humanity.