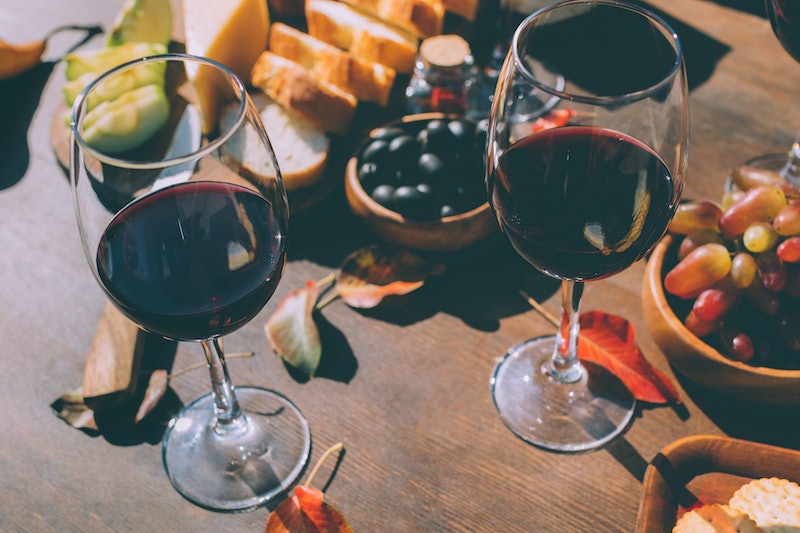 What is Sober October, you ask? Well, it's an idea that I thought I coined a few weeks ago, as though no other person could ever recognize that "sober" and "October" rhyme. Let's all raise a glass of O'Doul's to my extraordinarily high self-esteem, because it turns out Go Sober for October is a big-deal charity thing in the UK. My rendition is uncharitable and basic — it just entails quitting booze for a month, just for the hell of it. Which doesn't sound so tough, except, do you know what's totally booze? Wine. Specifically, RED wine.

Yeah, as it turns out, the reason why red wine looks so much like blood is that it is, in fact, lifeblood. Not that I have a drinking problem, per se. (Reeelax, Mom!) It's just, now that I'm over a week off the juice, I'm realizing how many situations are drastically improved by a glass of pinot noir: watching TV, working past 8 p.m., hanging with friends, writing, breathing, eating fruit... (Apples taste weird when they're not soaked in sangria, FYI.) I'm not trying to discourage you from your own Sober October, or Dryanuary, or whatever healthy goals you choose to set. But vino? I miss it, and November still feels really far away.

It all starts out fine, when you first decide to take a month off from drinking. After all, you're still allowed to drink until the new month starts.

And when dry month rolls around, the first few days are easy.

Until your girls want to do a wine-and-movie night, and the reality of your situation sinks in.

You feel a lot of things at once...

And then you feel a little empty.

You try to convince yourself that YOU NEVER EVEN LIKED RED WINE, ANYWAY.

But secretly, this is all you really want:

Probably unrelated fact: you have no idea why you've suddenly started using super dark burgundy lipstick, but it is working for you!

Hey, are you allowed to eat FOOD with red wine in it, like a good bolognese sauce?

To distract yourself, you decide to winelessly watch the Scandal season premiere, in which Olivia Pope spends a large chunk of the episode sexually describing a vintage red.

But even though it's tough...

You decide to stick it out.

But only because you've promised yourself that you're going to faceplant into a $50 bottle of nice, dry chianti when this is all over.

But until then, sober solidarity.

More like this
An Expert Weighs In On The Viral Raw Carrot Salad Trend
By Alexis Morillo
These 3 Signs Are The Master Chefs Of The Zodiac
By Kristine Fellizar
These 4 Zodiac Signs Make The Best Bridesmaids
By Nina Kahn
The Zodiac Sign Pairs Most Likely To Have A Sibling Rivalry
By Kristine Fellizar
Get Even More From Bustle — Sign Up For The Newsletter
From hair trends to relationship advice, our daily newsletter has everything you need to sound like a person who’s on TikTok, even if you aren’t.