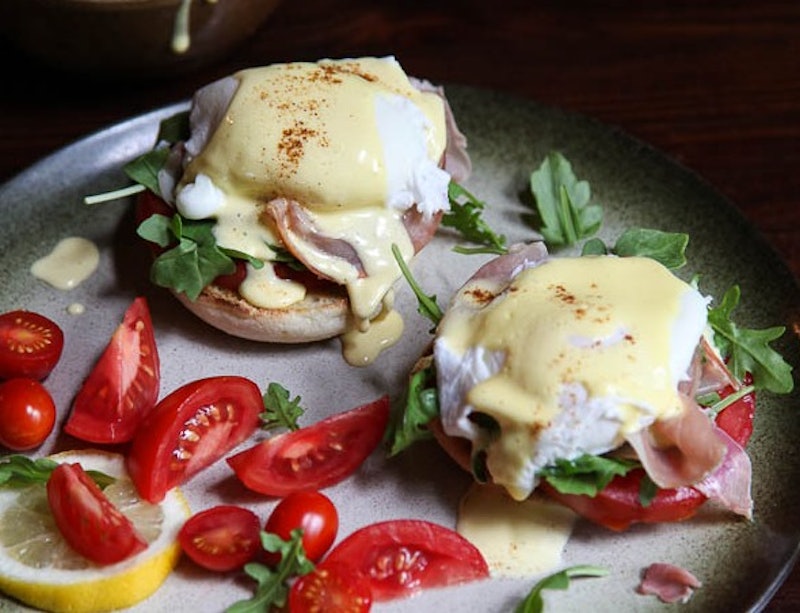 Today, the New York Times published an extremely controversial decision, and it’s not about Ebola, the Islamic State, or any other relevant or otherwise important news topic. In a piece titled "Brunch Is For Jerks, New York-based writer David Shaftel took to the Times’ op-ed vertical to bash one of America’s most beloved pastimes — eating omelets and drinking mimosas after noon. And he did so on a Friday no less, just two days before many of us were preparing to spend our weekend plopped on a patio getting day-drunk while enjoying all-you-can-eat Eggs Benedict.

In the piece, Shaftel declares that brunch is for jerks. “The meal has spread like a virus from Sunday to Saturday and has jumped the midafternoon boundary. It’s now common to see brunchers lingering at their table until nearly dinnertime.” The author also points to a mounting “backlash” against brunch, evidenced by a quote from the lead singer of The Strokes that blamed brunch for his personal exodus from New York.

There are a few legitimate concerns in Shaftel’s diatribe, like the fact that servers really hate brunch crowds because of bad tippers, but that has more to do with people who are jerks all the time, not just at brunch. Unfortunately for Shaftel, basic, late-breakfast loving bitches are legion. Brunch is here to stay, and that’s because it’s awesome. Here are four gif-enhanced reasons why.

With brunch comes day drinking, which is exponentially more fun than drinking at night. Only someone who hates joy and freedom would disapprove of day drinking, especially when you consider the (completely un)proven benefits that morning booze can have on your hangover from the night before. There is something magical about a pitcher of mimosas at 11 a.m., and that probably has something to do with the combination of champagne and sunshine.

If loving a never ending pile of bacon and pancakes is wrong, I will never, ever be right. Shaftel’s complaints about brunch are backed up by some Canadian author who actually wrote a whole book about how much he hated brunch. “Chefs bury the dregs of the week’s dinners under rich sauces, arranging them in curious combinations,” something that someone who is paying $11.99 for all-you-can-eat food could care less about. As long as it’s covered in queso or Hollandaise sauce, I’m down.

Shaftel calls brunchers “bedraggled,” a moniker most of us are proud to carry. It’s Sunday morning, dude. Brunch is literally the only time that you can go to an otherwise fancy restaurant looking like a complete slob. Throwing your boyfriend’s shirt on top of some clean-enough leggings is considered chic attire for brunch, and that’s only because our favorite celebs and Real Housewives have given us some brilliant inspiration. Besides, only a man would complain about women not making themselves look attractive enough for a meal.

If you’re a busy, independent woman, it’s likely that your friends are too. If it weren’t for brunch, we’d never see our friends, especially when you factor in the fact that they’re all starting to settle down, get married, and have kids. Brunch gives us an opportunity to drink, gossip, and reconnect with our bests in a way that no other meal can. There’s something uniquely freeing about gorging yourself on a pile of potato pancakes without shame, and we all need a few hours with our bests before heading back to (ugh) work on Monday.

Don’t let someone whose life is clearly devoid of joy and happiness make you feel bad about your late-breakfast habit.

More like this
Dunkin’s Valentine’s Day Lineup Includes A Drink That Tastes Like Dessert
By Alexis Morillo
Pret & Costa’s Coffee Is The Strongest On The High Street, According To Which?
By Sam Ramsden
15 Black-Owned Liquor & Wine Brands To Add To Your Bar Cart
By Alexis Morillo
12 Aphrodisiac Desserts To Spice Up Your Valentine’s Day
By Kaitlyn Wylde
Get Even More From Bustle — Sign Up For The Newsletter
From hair trends to relationship advice, our daily newsletter has everything you need to sound like a person who’s on TikTok, even if you aren’t.