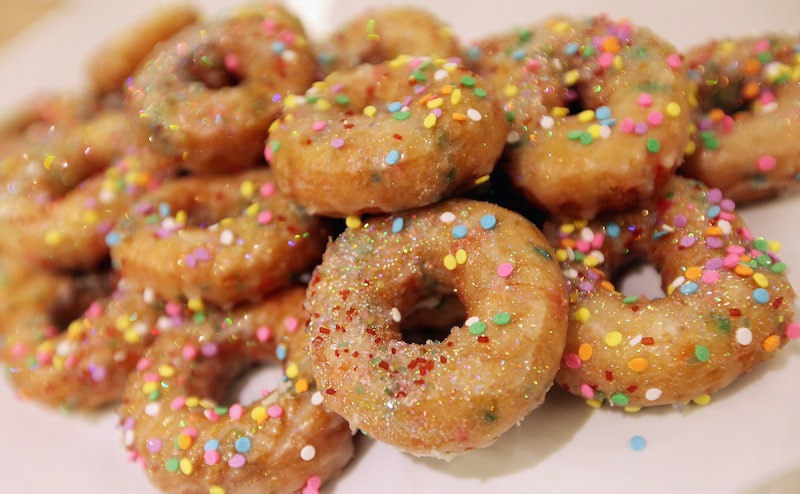 The selfie game just got taken to another level: The "donut selfie" is a 360-degree video selfie that is executed by starting a video on one side of your head, panning around to the other side, closing in on the side of your face, and then – here's the cool part – starting again at a completely different time. It probably doesn't make a ton of sense when I explain it, but the video below by Karen Cheng will show you what I mean. It's awesome. Not only are you getting a much more dynamic view of yourself, but you're able to continue the "selfie" at a later time, in a continuous loop. I'm a little disappointed that this has nothing to do with actual donuts. Although, I guess we could take donut selfies of ourselves eating donuts? I'm really good at finding reasons to eat donuts, AMA.

As much as I'm a fan of the donut selfie, I still have mixed feelings about selfies in general: on one hand, it truly is a bummer to spend so much time thinking about your own face and body when there's so much else happening outside of yourself that you're maybe missing (another reason I love the donut selfie – it isn't just you, it's you in context of the world around you. Contextualizing our existence via selfie-taking is a hell of a lot better than isolating ourselves.) I think we become somewhat less interesting and less decent as we become more self-obsessed. I think we become detached from other humans, and see their actual humanity become less real to us, which opens the door for less compassionate, caring choices. In some ways, I do think that our fondness for selfies is a case for everything that is wrong with the world. I think it's super problematic to constantly engage in a behavior that has us solely focusing on ourselves to the exclusion of the outside world. I can't help but think we internalize that to possibly dangerous consequences. That's what one half of me thinks.

The other half thinks that selfies can – stay with me here – be a legitimately important feminist statement, and constitute a powerful reclamation of personal power. Think about it: Ultimately, what we're vilifying when we hate on selfies is an awareness of one's attractiveness; we are trained to think that we're supposed to always look good, but never acknowledge that we know we look good. We spend hours getting ready before we leave the house, but our fist impulse when someone compliments the appearance we worked so hard to achieve is to self-depricate. When you take a selfie, you're basically saying, "Hey, I like how I look right now and I want to show you!" which completely undermines the preferred way for someone – especially a woman – to be beautiful: to do so without realizing it.

Why do you think we have so many popular movie and book narratives about women who don't think they're beautiful until a dude comes along and tells them they are? And why is that lack of awareness of one's beauty so attractive to the leading men? Sure, maybe we're supposed to think the appeal is that these women are less arrogant or superficial as a result of not feeling beautiful, which are admittedly cool traits for someone to have. But the actual appeal of the Girl Who Doesn't Know She's Beautiful is far darker: It's because she embodies the ideal combination of traits for a woman to have in our culture: all the hotness of a hot person with all the insecurity of someone who doesn't think they're hot; someone who you want to have sex with who is insecure enough to feel lucky that you want to, and thus, is more likely to let you. It's the dream of winning the lottery versus actually working hard and saving money – all the "payoff" with none of the work.

To be aware of your beauty would mean you have the opportunity to leverage the power it gives you, and if there's one thing our society loathes and fears, it's women with power. When you share a selfie, it's openly claiming your beauty and the possibility therein, and that's an intimidating liability to all the gender-based power dynamics our society is comfortable with. And so, we shame. We call selfie-takers shallow and superficial at best; at worst, we call them attention-seekers and whores. Maybe it seems like a far leap to connect selfie-shaming with the oppression of women, but I'm telling you, they are directly linked. We want our women looking fine but feeling really bad about themselves.

With that in mind, I'm staunchly pro-selfie. I'm pro-women understanding and accessing every source of personal power at their disposal, and I'm anti-denying that physical beauty holds power. And I'm always, always pro-donut.