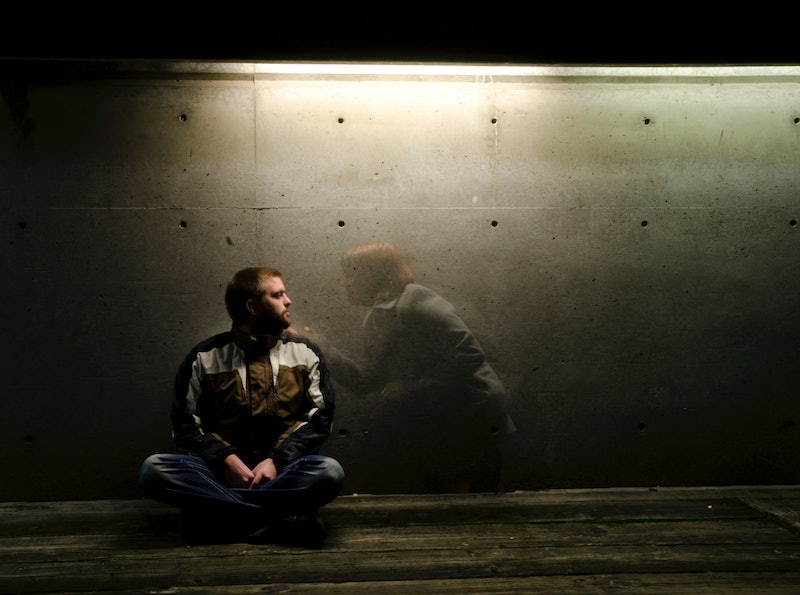 Yeah, yeah, urban legends are terrifying, but you know what else can be super spooky? Love gone wrong, that's what. I mean, you've seen Gone Girl, right? It may be an extreme example of how warped passion can get super scary, but I can say from personal experience that even healthy love has a sneaky way of transforming the sanest among us into obsessive, raving lunatics.

So, with All Hallows' Eve fast approaching, I would like to pry you away from the many ghost stories haunting your web browser right now to share something even scarier with you: four twisted, true, and terrifying stories in which love goes completely, horrifyingly off the rails. Read! Shiver! Consider eternal singledom!

File this under The Worst Fiancé of All-Time. When Martin Kazprzak started to tire of his six-years partner and the mother of his child, Michelina Lewandowska, he sat down with her and had a difficult but honest conversation about how he wanted to end the relationship. HAHAHA JUST KIDDING, Martin actually grabbed a buddy, tasered Michelina, taped up her wrists, ankles, and mouth, popped her in a cardboard box, and buried her alive in a wooded area.

However! Martin did, at least, leave Michelina with her engagement ring. Which, yes, seems like insult to injury, but it wound up being super lucky for Michelina, who was able to use the ring to saw through her tape. With that accomplished, she was able to escape her subterranean prison, and took Martin's ass to court for attempted murder. He was, duh , found guilty, and received a 20-year sentence.

In the late 1950s, Burt Pugach and Linda Riss's love story began as an extramarital affair, as all the best scandalous (or, tee hee, Scandal-ous) couplings do. Burt was the hitched half of the couple, and apparently the subject of his wife and daughter just never came up with his pretty, young mistress. When Linda found out, she was horrified and broke the relationship off immediately. Burt did not take it well. He began to stalk and threaten Linda, telling her over and over, "If I can't have you, no one else will have you, and when I get through with you, no one else will want you."

When Burt found out Linda was engaged to another man, he made good on that threat by hiring a man to throw lye on her face. Linda was disfigured, her fiancé left her not long after, and here's the really scary part: Burt then proposed to Linda, she accepted, and the two remained together until she passed away in 2013. Linda even testified on Burt's behalf when another mistress of his (YEP) claimed he was stalking and threatening her. Just... what?

Listen up, people: if your partner blithely informs you that you're going to die soon, you should probably worry about it. If only that had occurred to Tillie Klimek's first four husbands back in the early 1900s, all of whom mysteriously passed away not long after she predicted their imminent demises. The black widow murderess's fifth husband caught a lucky break — family members found him ailing and took him to get his stomach pumped. Tillie, as it turns out, had been adding arsenic to his food; she pleaded guilty to attempted murder and was sentenced to life in prison.

You probably already know about Lorena and John Bobbitt despite that fact that their 15 minutes of fame occurred over 20 years ago. To jog your memory: on a summer night in 1993, Lorena claims, she woke up to find her husband raping her. (A year later, she would explain in court that the violation was the latest in a string of abusive horrors John unleashed on her throughout their marriage.) John fell asleep after he finished, and as he dozed, Lorena slashed off his dick with a kitchen knife, as one does, and chucked the thing in a nearby field.

All things considered, things eventually turned out pretty OK for both Bobbitts. Lorena called the cops almost immediately, the penis was found, and surgeons were able to reattach it to John's body. In 1994, he was acquitted on charges of marital sexual assault (read: spousal rape); Lorena, too, was found not guilty of maliciously wounding her husband. The couple got a much-needed divorce in 1995.

More like this
18 Hinge Prompt Answers To Try If You’re Looking For Something Casual
By Lexi Inks
23 Super Sweet Things To Write In A Valentine's Day Card
By Karen Belz and Lexi Inks
Here’s What TikTok's "Mascara” Trend Is *Really* About
By El Hunt
The 3 Zodiac Signs Most Likely To Get Married Later In Life
By Kristine Fellizar
Get Even More From Bustle — Sign Up For The Newsletter
From hair trends to relationship advice, our daily newsletter has everything you need to sound like a person who’s on TikTok, even if you aren’t.