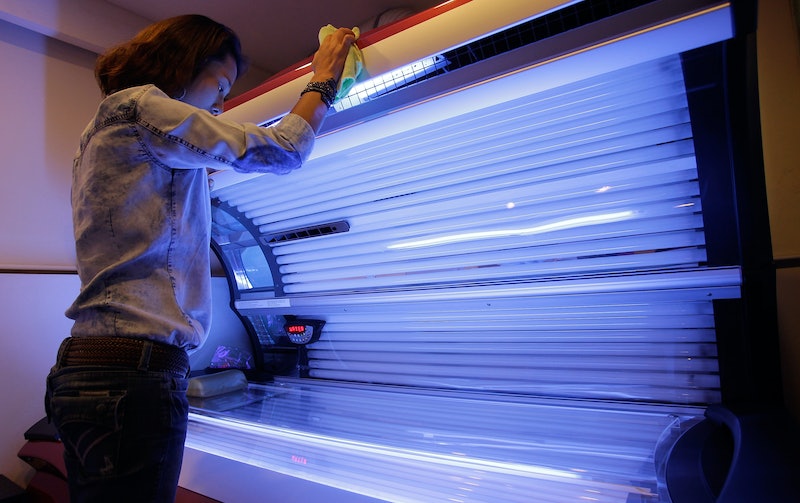 Pretty much everyone agrees by now that skin cancer and UV rays are linked, but for some reason, out of the top 125 colleges in the nation, half still have tanning beds available either on or off campus. For more than five years now, tanning beds and lamps have been on the International Agency for Research on Cancer's list of "most dangerous forms of cancer-causing radiation," and typically colleges are known for promoting healthy lifestyles for their students. So what gives?According to the report, published in JAMA Dermatology, 12 percent of colleges across the nation offer tanning services on their campuses. That's kind of high, but not too bad, right? The number increased drastically, though, when researchers looked at the availability of tanning around colleges: 42 percent of off-campus housing offers tanning beds, most of the time at no cost to tenants. The Midwest had the highest incidence of tanning beds, with almost 27 percent of campuses offering the service, and a whopping 67.7 percent of off-campus housing in the South provide tanning beds or lamps. When you consider that tanning increases your risk of melanoma even if you don't burn and that indoor UV lamps produce 10 to 15 times as much radiation as the midday sun, college students' easy access to tanning beds is a little concerning. Skin cancer is the most common form of cancer in the United States, but according to the Centers for Disease Control, 32 percent of non-Hispanic white women (the group with the highest rate of usage) ages 18-21 still use tanning beds, despite being aware of the risks.

Even if young women are aware of the risks associated with tanning, chances are high they're going to keep on keepin' on if they feel like it. So why is it that colleges allow tanning beds on campus when many have banned...

According to the American Nonsmokers' Rights Foundation, almost 1500 college campuses are 100 percent smoke-free. No cigarettes, no cigars, not even e-cigs because, as you're hopefully aware, tobacco smoke causes cancer. (This list includes my alma mater, Emory University. Go Emory!)

It's pretty hard to ban alcohol entirely (we all know how well Prohibition went), but CollegeXpress has a list of 41 colleges that offer "substance-free" housing.

Yup. According to their website, Pensacola Christian College, located in Florida, doesn't allow their students to watch television on campus, in order to provide "an atmosphere free from the distraction of worldly influences."

If colleges can ban TV and alcohol, two of college students' favorite pastimes, they can start cutting down on the number of tanning beds available. I know winter is coming, but resist the call of the tanning bed. Is it really worth it?