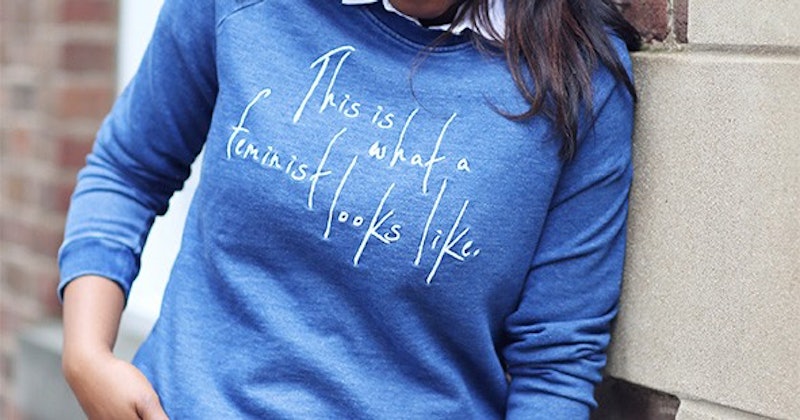 You know those "This is what a feminist looks like" t-shirts that celebrities have been wearing like crazy? Turns out they were being manufactured by heavily exploited female factory workers. Ben Ellery of the Daily Mail reported that women in Mauritius were paid less than a dollar an hour to produce the $70 t-shirts promoting feminism. Ugh, this is why we can't have nice things!

The shirts, which have been spotted on everyone from Benedict Cumberbatch to Joseph Gordon Levitt, were created for the Fawcett Society, a women's rights organization, in conjunction with the high-street retailer Whistles and fashion magazine Elle. They're super cute, which explains why so many people jumped on the bandwagon — it's an easy, chic way to show support for feminism. Who wouldn't be down?

Unfortunately, the behind-the-scenes is not so rosy. Fayzal Ally Beegum, president of the International Textile, Garment and Leather Workers Union, told Ellery:

The workers in this factory are treated very poorly and the fact that politicians in England are making a statement using these sweatshop T-shirts is appalling. It would take a woman working in the factory nearly two weeks just to buy one shirt. What is feminist about that? These women have nothing in this world. They are paid a pittance and any money they do receive they send back home. They work very long hours and have no lives other than their work. They are on four-year contracts that mean they don’t get to see their families in that time. What kind of existence is it when you are sharing your bedroom with 15 other women?"

This is disappointing news, to say the least, and it undermines the very movement these shirts sought to support, especially because these struggling factory workers are women. The Fawcett Society has released a statement on their blog claiming they had been assured by Whistles that the Mauritian factory adhered to ethical guidelines.

At this stage, we require evidence to back up the claims being made by a journalist at the Mail on Sunday. However, as a charity that campaigns on issues of women's economic equality, we take these allegations extremely seriously and will do our utmost to investigate them.

The shirts have been pulled from the Whistles website where they were being sold, although it's unclear if this is simply a response to the backlash or if it indicates that further evidence of exploitation was found. Either way, I'll stick to demonstrating my feminism in other ways.