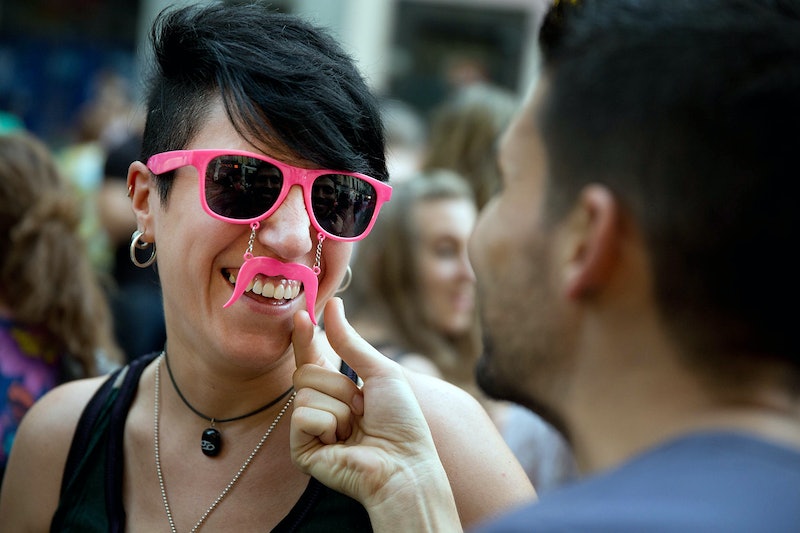 November signals the start of many things — Christmas shopping season, Twitter gratitude season, "put on some sweatpants and quietly carbo-load 'til April" season — but none of them are quite as delightful or as helpful as Movember, the annual charity event where men (and women) grow mustaches to raise funds and awareness for men's health issues. The month-long shaving fast, which started among a small group of friends in Australia in 2003, is now a worldwide phenomenon — one that has raised nearly $600 million for testicular and prostate cancer and mental health education and services. The movement has counted 4 million mustaches grown as part of the event, with each soup-strainer cultivated in the name of destigmatizing discussion about men's health care.

But there's more to celebrate about Movember 'staches than just their excellent fundraising capabilities. This month, as your dad, honey, best friend, or brother grows a crumb-catcher, he is joining an illustrious fraternity, one with a rich history, intriguing culture, and potent sexual pull (sorry to talk about your dad that way, but it's true).

Mustaches have long been a subject of study and debate, a discussion topic among both old-timey bartenders and Tom Selleck enthusiasts alike. Are they actually sexy? Will they make you money? Will they give you something to talk to Johnny Depp about if you two are waiting on the bathroom line together? Read on, as we comb through the bristly truth about mustaches.

Nick Offerman, the actor who plays mustache-icon "Ron Swanson" on Parks and Recreation, is not the only man to benefit financially from having a mustache — a 2009 survey conducted by the American Mustache Institute found that men with mustaches made more money than their non-mustached male coworkers. Based on their self-reported incomes, the study found that the fuzz-lipped earned 8.2 percent more annually than the bearded, and 4.3 percent more than the facial hair-free. Oh yeah, also, there's totally an actual organization called the American Mustache Institute.

Okay, I don't have any scientific data to back that one up, but remember when Michael Cera grew one in Youth in Revolt to show that he was a devil-may-care rule breaker? And duh, they can't put things that aren't true in movies.

Though the issue of whether mustaches make you look rugged or like Napoleon Dynamite's brother remains a hot topic among any group of women who have consumed three or more cocktails each, a 2013 study conducted by researchers at the University of New South Wales provided a definitive answer. The researchers surveyed 600 men and women about men's facial hair, and determined that the most popular look for men was light facial hair — the look of roughly 10 days worth of stubble was consistently ranked above both the clean-shaven look and a full beard. OK, so ten days of stubble isn't always just going to be a 'stache, but depending how much hair you grow and where, it might be.

MUSTACHES ARE MORE POPULAR THAN YOU

MUSTACHES GIVE YOUR SOMETHING IN COMMON WITH JOHNNY DEPP

The only thing that any of us will ever have in common with Johnny Depp (no, buying a Jack Sparrow costume at Party City does not count).

I mean, what else do James Franco and Burt Reynolds have in common besides the ability (and seeming inclination) to give mustache rides to an eager and willing public?

Chicago was rated most mustache-friendly city in America by, again, the American Mustache Institute, which probably has more insight into this sort of thing than anyone.

MUSTACHES MAKE YOU MORE LIKELY TO GET A DATE

MUSTACHES HAVE BEEN AROUND LONG BEFORE YOU, AND WILL EXIST LONG AFTER YOU

The boom and bust cycle of mustache popularity has been going on at least since the Middle Ages, when medieval knights had special armor made to show off their bitchin' staches. The poet Lord Byron also popularized them in the mid-19th century, and they were a symbol of studliness in 1920s Hollywood. Let's all look forward to decades from now, when space 'staches will be proudly worn by the hologram robot people who live on the moon (or something like that).