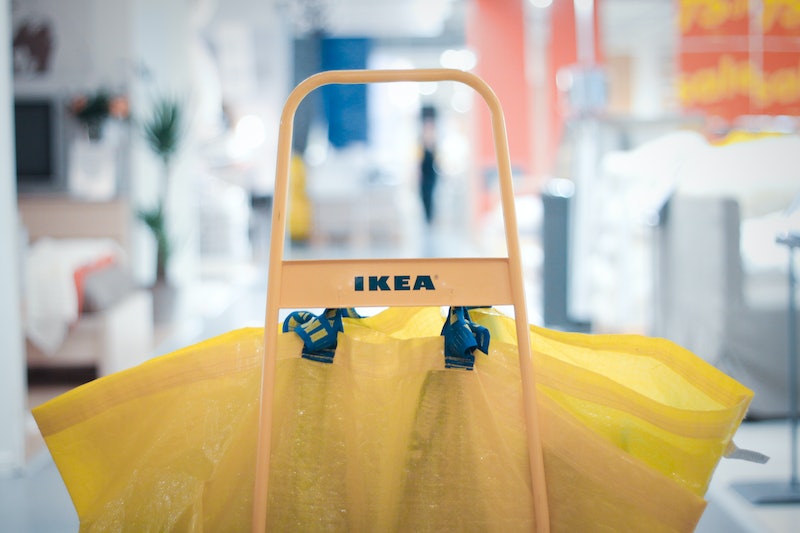 Whether you live in a tiny studio apartment or a Kimye-style mansion, odds are that something you own is from Ikea. And it makes sense given that walking into Ikea and leaving without purchasing anything is almost impossible. A pack of cheap silverware? A new pillow? Sixteen different sets of candles? It just seems like the right choice. But what if Ikea became an even more diverse (and perhaps dangerous) shopping destination and started selling our day-to-day wardrobe staples? Well, Swedish Fortune 500 businessman Stefan Engeseth thinks that in the future, fashion will be minimalist, Ikea flatpack-style, assemble-at-home endeavor.

As the Guardian pointed out, basically what this would mean is our clothes would come to us in put-together pieces, and we would be able to easily adjust them to our pleasing. And then, of course, would be the inevitable clothing "hacks" that people could come up with per their individual tastes. Imagine the Pinterest pages, guys.

According to Engeseth, what a possible Ikea clothing line could offer is a durable, higher-quality product that other fashion giants aren't really giving.

"We’re already seeing some shoppers go to outdoor and living stores to buy longer-lasting clothing. Ikea already sells reusable Kr 4 bags that are good and cheap; their clothes could be equally practical, as strong as work clothes," Engeseth said.

As one commenter on the Guardian article mentioned, a possibility of such a clothing line is that it could create a "clone" effect were it to catch on with, say, everyone who already loves Ikea.In a fashion world that keeps pushing for a more "normal" way of dressing (still trying to figure out what that means, personally), it's possible that such an idea could catch on. Well, maybe.

From where I stand, there's a reason why fast fashion superstores are successful. People know that when they buy a pair of $30 shoes at certain stores, those shoes aren't going to last longer than this season. It's not (I hope) as if people are buying into a guarantee or even a promise of durability. People realize (I hope) that eventually that piece of clothing is going to fall apart in a horrible, yet inevitable way. But people continue to shop at those stores. Why? Because people respond to trends that are relevant at prices that are reasonable. Curse the shirt that fell apart in the washing machine all you want, but you and I both know that we'll both be back buying a new, trendy (and equally cheap) version of that shirt in a couple weeks. It's fast and it's easy.

Assemble-yourself clothing? Not so fast and easy. Fun? Rewarding? Possibly, but not exactly convenient. But while Ikea may not be able to provide 'flatpack' clothing that's current and appealing to people who want fast trends as soon as possible, it's true that the idea still has a chance to be something popular if it falls in just the right place in the "normcore" scene.

And, after all, would any of us really mind being able to pick up some new clothes as we purchase furniture for our dream house that we may or may not actually own yet? Exactly.