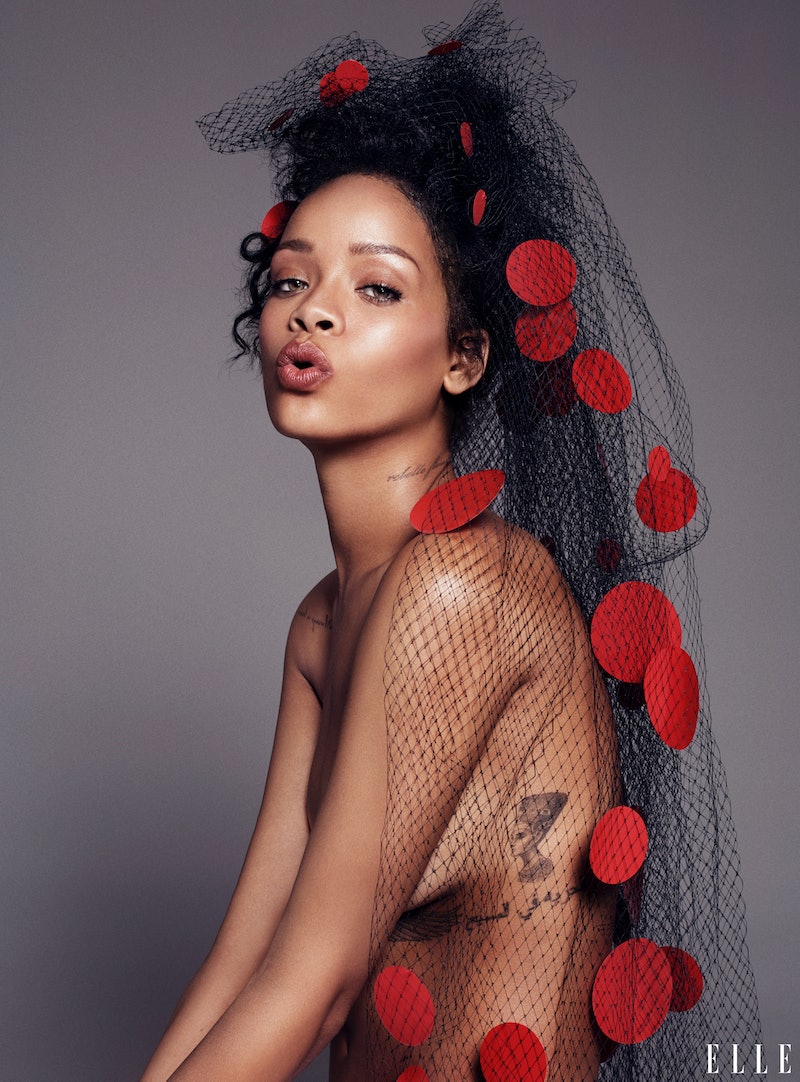 I guess you know you're pretty fabulous when your return from an Instagram hiatus makes the Internet explode and you appear on your fifth ELLE cover all in the same couple weeks. OK, so it's safe to say that Rihanna has been pretty aware of her own fabulous-ness for a while now, but a few reminders can't hurt, right? When the pop queen returned to Instagram over the weekend, everyone was generally pretty excited. Now, only days after, Rihanna's December Elle cover and photo spread is being released and promoted non-stop around the Internet. What a coincidence, right? And with that, the entire Internet bows down to Rihanna.

I guess since this marks Rihanna's fifth time since 2008 to grace the Elle cover, what she's wearing is only a side note to the fact that she is probably the world's most media-obsessed over pop star who also happens to be stunningly beautiful. However I, a mere mortal, would still like to know what exactly is going on with the dress (romper? onesie?). Yes, it's Versace Atelier and I know it makes me about 100 times less cool to say that I just don't understand it, but that's the truth. And hey, I know some of you guys are thinking the same thing. Don't act like you understand those buckles.

When I first see the dress, my immediate thought is of Zenon: Girl Of the 21st Century scenes. This, by the way, is a major pro for the dress in my book because Zenon is, was, and forever shall be fabulous. But I digress. After recognizing the stunning dress in all of its metallic glory, the black silk makes its way into your line of vision and leads you to the buckles... and this is where I am lost. It's like sections of a '90s prom dress buckled on top of Zenon's dream outfit for her marriage to Protozoa. Again, probably a great thing.

But I suppose this is Rihanna we're talking about. The woman made wearing a head-to-toe sheer gown seem utterly chic. She's a powerful, stylish, innovative, insanely attractive superstar, and because of that, I'll end my questions about the Versace number here.

ELLE also had some questions for Rihanna in the December issue, asking the pop star about her mantra ("f**k bitches, get money"), her biggest fear ("childbirth") and the craziest thing she's ever done (still a secret, apparently). The five-time ELLE cover girl answers all the questions in a fun, rawly honest manner, making for a surprising interview to match the still-confusing cover outfit.

The December issue of ELLE will be available on newsstands nationwide wide on November 18, though you can get a sneak peek inside at elle.com right now.