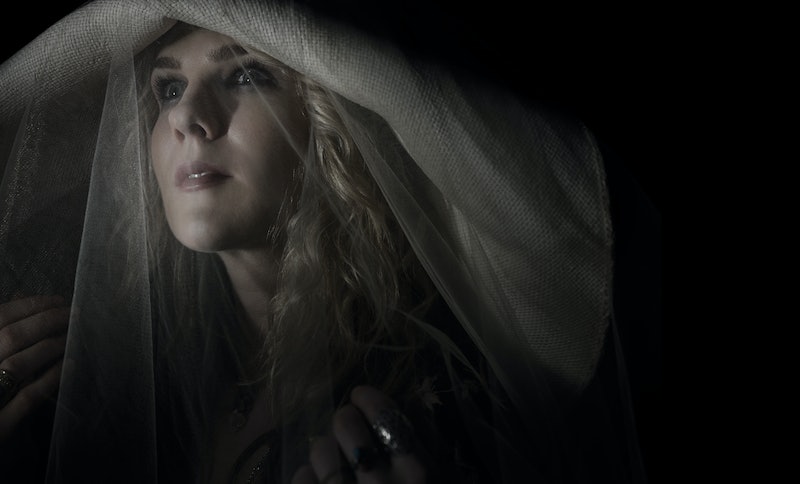 So, it's official: all of American Horror Story is connected... or at least so says showrunner Ryan Murphy. The first rumblings of this news started well before Season 4 of the anthology show premiered, when it was revealed that actress Naomi Grossman would be reprising her Asylum role as Briarcliff inmate Pepper on Freak Show. But now with the news that a second Asylum character will be popping up on Freak Show, it seems that the grand unifying theory of AHS is starting to take shape. But how exactly will Lily Rabe play into AHS: Freak Show ?

AHS fans were sad when it appeared that Rabe would not appear in Freak Show — the first season the popular actress would miss — due to her commitments as the star of ABC's upcoming alien invasion thriller The Whispers . (Rabe previously appeared as grieving ghost mother Nora Montgomery in Murder House, possessed Sister Mary Eunice in Asylum, and loner swamp witch Misty Day in Coven.) So it's welcome news that, while Rabe won't get the chance to craft a brand new character, she will at least be appearing on the show's fourth installment: she will turn up later this season as Sister Mary Eunice — sans the devil insider her, of course, since Freak Show takes place before the grisly events of Asylum.

As exciting as this news is, it raises some questions. Won't this connection between Seasons 2 and 4 result in some inconsistencies? In Asylum, we learned that Pepper was brought to Briarcliff after (allegedly) drowning her sister's baby and cutting off its ears (a crime actually committed by her brother-in-law, who framed her for the murder). But in Freak Show, we see Pepper as a relatively happy member of Elsa's Cabinet of Curiosities, with nary a sister, a brother-in-law, or a drowned baby in sight. What gives?

There are four distinct possibilities. The easiest — and least fun — is that the backstory is inconsistent simply because we're not meant to take the connection so literally. The appearances of Pepper and Mary are just Easter Eggs for diehard fans of the show. Hopefully more thought went into the game-changing decision to connect the seasons than that, so here are the other three possibilities:

OK, that last possibility may be a bit farfetched, but Murphy clearly has a lot more surprises up his sleeve for AHS fans, so don't be surprised if there's more than meets the eye to Rabe's role on Freak Show.

More like this
Billie Eilish Teased The Debut Of Her New Fragrance
By Audrey Noble
The Chicest ’90s Updo Hairstyles To Try
By Paris Giles
13 Caffeine-Infused Eye Creams, Patches, & Serums For Puffy Under Eyes
By Olivia Rose Ferreiro
Your No-B.S. Guide To Female Pattern Hair Loss Treatments
By Parizaad Khan Sethi
Get Even More From Bustle — Sign Up For The Newsletter