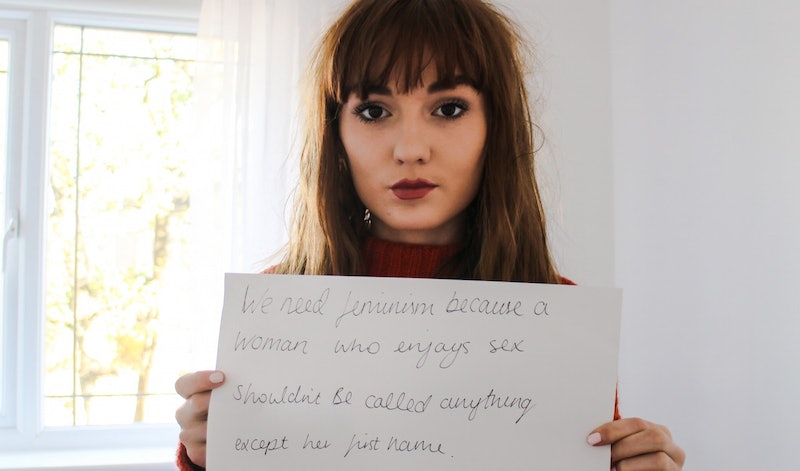 It will not come to a shock to anyone that somewhere along the way, "feminism" became synonymous with man-hating. It became, to some, a means to superiority, rather than equality. For some still, it has become frighteningly superfluous — something that the Suffragettes had to start way back when to garner voting and property rights, but that we don't need "this day in age," when things are so "perfect" and women are treated so "equally."

So when the Tumblr blog, and corresponding Facebook page, "Women Against Feminism" had its moment in the spotlight back in July, I wasn't totally surprised. Most of the group's members are young women, whose reasons for not needing feminism encompass things like, "I don't need to grow out my body hair to prove I'm equal to men," or "I don't need feminism because if I'm wearing a top like this, I want you to look." Some of the reasons, however, go beyond silly and straight to terrifying: "I don't need feminism because I actually am courageous and strong. And I actually have awards, commendations, medals and scars to prove it," as written by a female soldier twice deployed in Afghanistan. She was unaware, it would seem, that it was the work and struggle of early feminists that allows her to now serve in the military, not to mention that allows so many women to work in occupations previously reserved for men. But then again, this particular woman — along with the page's 20,000 followers — do not consider issues like the gender wage gap, slut shaming or victim blame to be issues at all.

When "Women Against Feminism" got the attention it did, Bustle writers and editors responded in a wonderful roundup of some of the many reasons we truly need feminism. And through women like Tavi Gevinson and the entirety of ROOKIE, through Lorde, through Emma Watson and her incredible UN speech on gender and equality, young women have really re-opened the feminist discussion as of late. Which is a beautiful, powerful thing. Conversations about how far we have come, and how far we have yet to go, have surfaced to a degree far grander than I've previously seen in my short Millennial life.

And as a result, I've become really fascinated by the varying definitions of feminism that we all possess, because feminism is both a personal and a collective thing. I've become intrigued by how some of the women I admire define their feminism, and more specifically, how the inspirational fashion bloggers (an industry that still, unfortunately, tends to have a reputation for being full of unintelligent floozies) I admire define their feminism.

When I was composing an email to send out to some of my favorite fashion bloggers, I asked them simply to answer the question, "What does feminism mean to me?" In Bustle's roundup of why we need feminism, our Senior Features Editor Rachel Krantz wrote, "I was interested to see that some of us chose to write signs that spoke for only ourselves ('I need feminism because… '), while others spoke in terms of why 'We need feminism.'" Something similar occurred whilst I read the responses I received from bloggers. Once again, some of the women began their sentence with, "We need feminism because," whilst others kept it individual, beginning with "I need feminism because," or "My feminism..." At the end of the day, we all have our own definition — but the root of feminism has always been equality. And so, it will always be a necessity. Here is what some bloggers had to say:

Blog: And I Get Dressed

More like this
Women Around The World Are Cutting Their Hair In Solidarity With Mahsa Amini
By Darshita Goyal
The 12 Best Strapless Bras That Won’t Slip & Fall Down
By Audrey Williams and BDG Commerce
40 Expensive Mistakes You're Making Inside & Outside Your Home
By Mackenzie Edwards
The 5 Best Rugs That Cats Can’t Destroy — & Why Your Cat Scratches, According To A Vet
By Danielle Calma
Get Even More From Bustle — Sign Up For The Newsletter