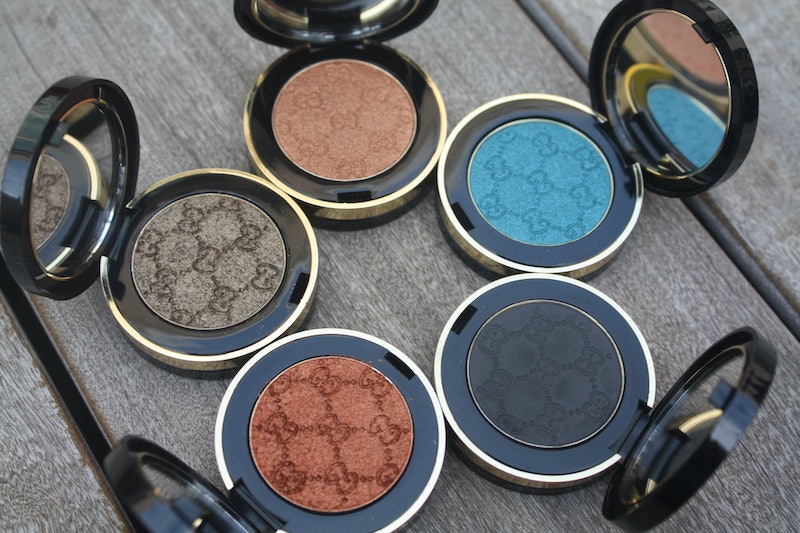 With the sheer volume of makeup launches happening every month, nay second, it takes a significant amount of ingenuity and sheer luxury to gain the attention of the beauty industry. That is not, however, to say it can't be done. The legendary House of Gucci launched a line of luxury cosmetics this month, and each gilded lipstick, shimmering nail polish, and vibrant liner has beauty mavens abuzz. Instead of merely lending its name to a capsule collection by an established brand, as has been the trend of late, or allowing an outside team to execute a makeup line which has little to do with the brand itself, this one was developed in-house. Sold online and in-stores at Saks Fifth Avenue, Neiman Marcus, and select Gucci boutiques this month, the line promises to revolutionize the way you think of makeup.

However, the creative process behind Gucci Cosmetics was a more in-depth affair by far. Lead by Frida Giannini, the team wished to craft a line of cosmetics which would live up to the brand's 100-year legacy and give brand loyalists another facet of the luxury experience. With the help of renowned backstage makeup artist Pat McGrath, Gucci developed a cosmetics line that oozes opulence.

Those who love the rebellious tilt of Kat von D's bold makeup or the boundless sea of daring colors offered by Make Up For Ever aren't analogous to the Gucci Girl; the company's makeup line is the cosmetic soul mate for the modern day Grace Kelly, which is reflected in Gucci's selection of Kelly's descendent Charlotte Casiraghi as the face of the product. The line is a makeup mashup of '70s Studio 54 allure and the modern magnetism associated with red carpet glitz.

From the brand's halcyon ad campaign to the gilded packaging, inlaid with the brand's interlocking G's, glamour is the name of the Gucci Cosmetics game, and the quality of the products speaks to the same intrinsic principle. The Impact Longwear Eyepencil not only boasts a creamy texture and range of jewel-tone shades, it sets in a matter of seconds — ideal for both the meeting-swamped modern professional and the night owl who adores dancing until sunrise. The Gucci Opulent Volume Mascara is a similar multitasking genius, engineered to coat every single lash thanks to the addition of slim "paddles" to the mascara wand, which sweep color from root to tip.

Gucci's Lustrous Glow Foundation and its Golden Glow Bronzer are meant to impart a healthy glow onto the skin as though the wearer has spent a weekend in St. Barthes, and a dash of the Sheer Blushing Powder gives a rosy glow to even the palest of cheeks.

If you're a devotee of rouge lipstick, Gucci's Audacious Color-Intense Lipstick has the perfect, femme fatale red, to be complemented or switched for Gucci's Vibrant Demi-Glaze Lip Lacquer on special occasions.

Ultimately, Gucci's new cosmetics line provides accessible, everyday luxury to both its brand loyalists and those who may not be able to afford the classic Soho bag without skipping out on a month or five of rent. And who doesn't enjoy incorporating a bit of grandeur into their quotidian routine now and then?