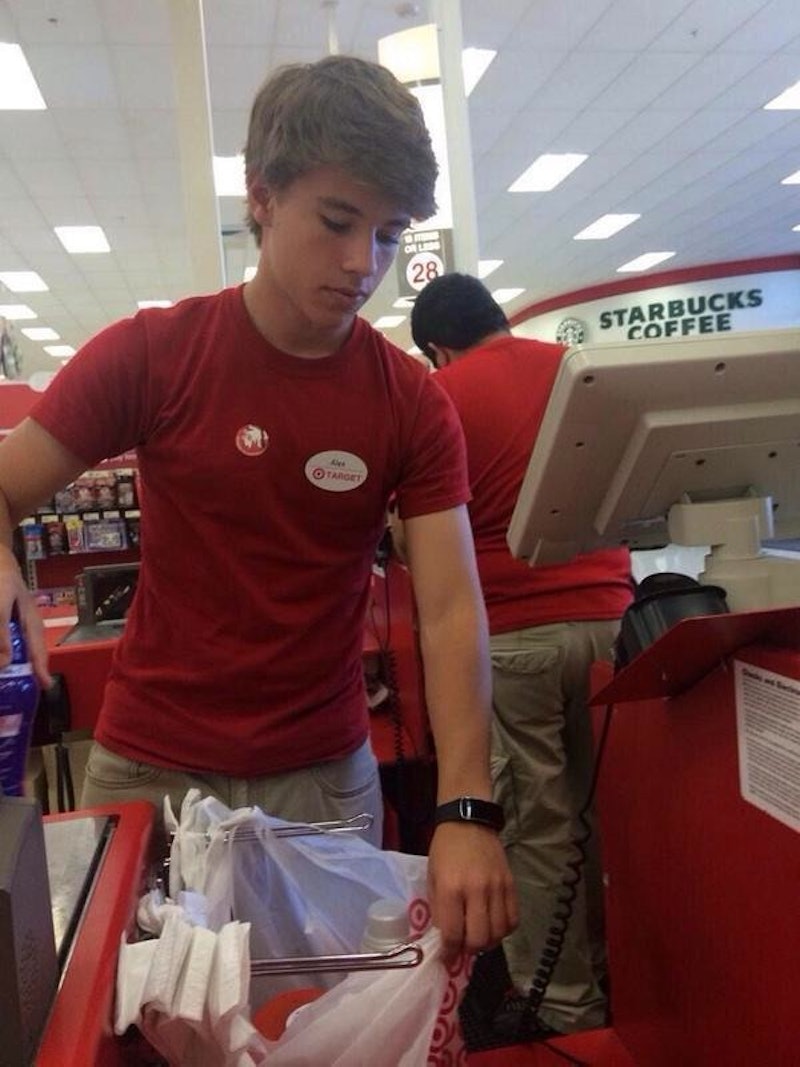 When "Alex From Target" started popping up on the Internet over the weekend, I think we all sort of half-chuckled the way we do when we see anything that goes viral. "Oh, look, it's a dog that bark-talks! A small child cursing! I love this stuff." A Target employee, plucked from obscurity because of his teenage good looks, suddenly finds himself with 500,000+ Twitter followers. There's something just magical about the power of the Internet, no? But what if I were to tell you that "Alex From Target" is nothing more than part of a stunt from marketing company? Doesn't seem so great anymore, right? Exactly. Now, Marketing company Breakr is claiming that they're behind "Alex From Target" and his overnight success. Is any real person who becomes an Internet sensation overnight even a real person anymore? The hard questions of our generation, all.

Not familiar with Alex yet? Let me fill you in. Essentially, the story goes that Alex is simply a guy who works at Target and also happens to have perfectly swoopy hair. A picture of Alex from Target somehow ended up on Twitter, and then just like that, #AlexFromTarget was born. I know what you might be thinking, "I mean, he's just a good looking kid. What's the big deal?" You have a point, but if you've ever underestimated the power of teenage girls to take something relatively commonplace/cliché and make it the most powerful (and sometimes terrifying) obsession earth has seen, I will give you a few examples: One Direction, Justin Bieber's entire existence and the Twilight series as a whole. I rest my case.

Long story short, #AlexFromTarget is famous now — in a "tons of followers on Twitter overnight" kind of way, anyway. Even Alex (whose real name is Alex Christopher Laboeuf, by the way) has been surprised be his sudden cult following.

So charming, right? He doesn't even understand the power of his blonde-y bangs. And if you really don't believe he's famous yet, Ellen DeGeneres, the patron saint of people who get famous on the Internet, even reached out to Alex.

No big deal, guys. Just another Tuesday. But enough background story on swoopy-haired Alex and on to the juicy stuff: Breakr, the marketing company claiming that they are behind the entire media success surrounding #AlexFromTarget, is saying that all of it was simply an experiment on their part to see how teenagers could be manipulated (Do you really need an experiment for that? Look at the history of boy bands, guys). The founder of Breakr took to LinkedIn to explain how his company was behind the entire thing.

Next problem: The original girl who posted the tweet, named Abbie, denies involvement in the entire thing. She says she simply re-posted the photo, which she found on Tumblr. And Alex himself (yes, THE Alex), says he and his family have never even heard of the company.

So, yes, the whole thing seems very unlikely and very sketchy, but if a marketing company is going out of their way to lie so directly, one has to wonder what exactly their ploy is this time. Totally fake scheme or not, #AlexFromTarget is now doing things like casually flying to Los Angeles, so either way, we all know who this whole Internet-obsession is really working out for (and it's not Breakr).