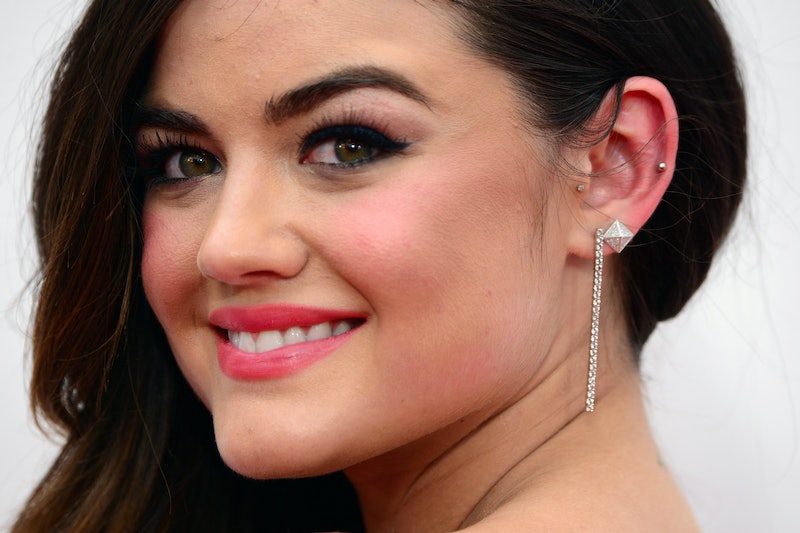 It's not exactly a secret what the most popular haircut of the year has been thus far. From your best friend to your favorite celebrity, everyone and their mother has chopped their hair and gone for the oh-so-trendy lob instead of traditionally lusted over, extra long hair. While Lauren Conrad certainly made some major headlines following her lob, now there's another star in the spotlight for taking the plunge and going for the chop. Although everyone might be used to her long, wavy hair, Lucy Hale just cut her hair into a lob.

While the new style is certainly more long than it is a traditional bob (in case you didn't already know: long + bob = lob), Hale decided to take the trend up a notch and add some ombré to the look. Trend on trend on trend — and it looks great. Pinterest would be so proud.

Because Instagram is obviously the only socially acceptable way to debut a bold new hair cut, Hale's stylist, Scotty Cunha, posted a photo of her new look on his own account and Hale posted a photo shortly after.

So, for those of you who haven't already jumped on the lob train, let's be honest — it's only a matter of time. And if you weren't already obsessed with the adorable-ness that is Lucy Hale and/or her fabulous hair, well, you probably will be now.

More like this
Halsey Debuted A Copper Pixie Haircut, & It's Such A Fall Vibe
By Olivia Rose Ferreiro
Your No-B.S. Guide To Female Pattern Hair Loss Treatments
By Parizaad Khan Sethi
Lily Collins Got Shaggy Curtain Bangs For Emily In Paris Season 3
By Audrey Noble
12 Bellissima Beauty Moments From Milan Fashion Week S/S 2023
By Olivia Rose Ferreiro
Get Even More From Bustle — Sign Up For The Newsletter