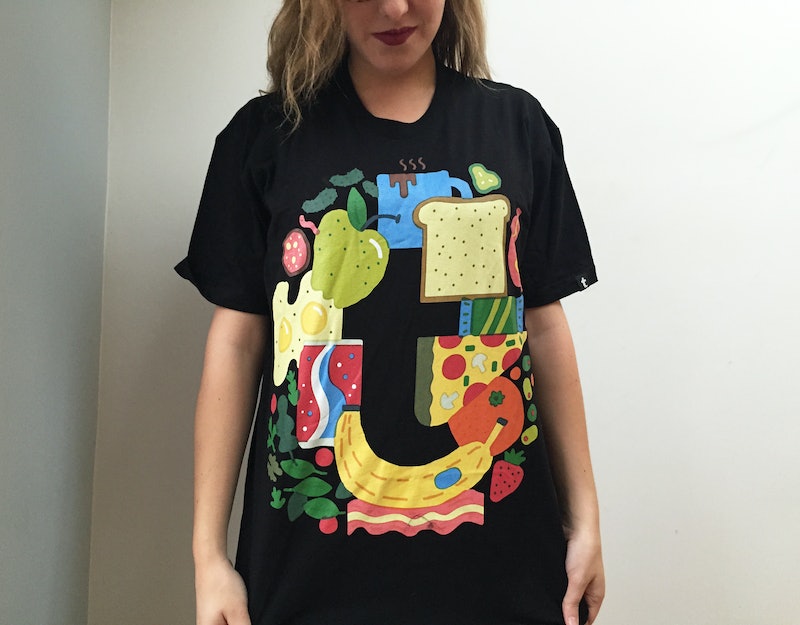 Come on, admit it — you're obsessed with Tumblr. It's okay, we all are. I've had my own Tumblr since freshman year of college and let me tell you, re-blogging F. Scott Fitzgerald quotes and photos of pretty girls wearing clothes I can't afford has gotten me through so much crap these past few years. More crap than you can possibly imagine. If Tumblr means as much to you as it does to me, good news — you can now show your love by sporting a series of Tumblr t-shirts!

Beginning on November 10th, Tumblr will release a series of limited-edition shirts on it's new website, Tumblr Merch. According to a press release, the Tumblr Merch Artists Series includes designs by "some of Tumblr's most well-known creators." Each artist's design will be made available for one month only, with a new design premiering from November 2014 to March 2015. Some of the proceeds from each t-shirt sale will go towards supporting the Media Democracy Fund, an organization that works to protect net neutrality.

If you're wondering whether the shirts are worth wearing, well, of course they are. This is Tumblr we're talking about! But don't take my word for it — check out the images below and see for yourself.

More like this
10 Corsets That *Actually* Work For Big Boobs
By Bella Gerard
15% Pledge Director LaToya Williams-Belfort On The Impact Of Supporting Black Business
By Dominique Norman
How To Get Your Hands On The Pat McGrath X Supreme Nail Kit
By Justine Knight
Prefer Alcohol-Free Perfumes? Water-Based Fragrances Are On The Rise
By Audrey Noble
Get Even More From Bustle — Sign Up For The Newsletter