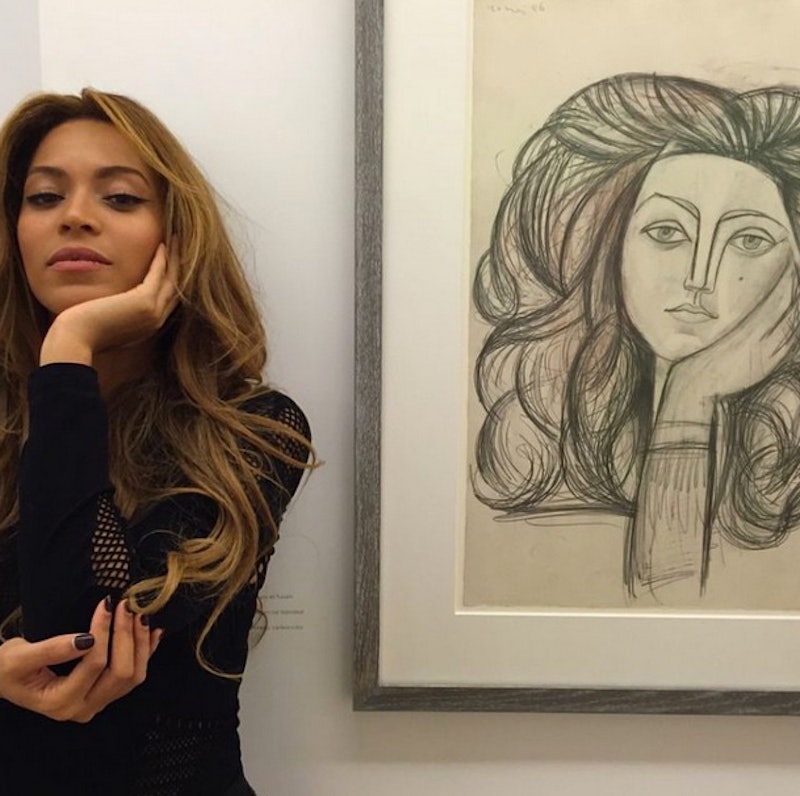 Beyoncé's got a new habit, and I kind of love it: It would seem that lately, she's taken to recreating famous works of art. Her pose with Jay-Z in front of the Mona Lisa went completely viral, and had fans the world over commenting that Beyoncé out Mona Lisa'd the Mona Lisa (a face swap meme that circulated recently kind of confirmed it, too. Honestly — only Beyoncé could beat Mona Lisa at her own mysterious smile game). Now, Beyoncé's posing with Picasso.

Just last week she posted pics on her Instagram from her trip to the Pablo Picasso Museum in Paris, and we were granted with yet another case of art imitating life. If possible she looks even more like this abstract Picasso charcoal rendering than she did the Mona Lisa. It's uncanny, really — she completely nailed everything from the ultra-voluminous hair (we're talking major hairspray before the days of actual hairspray) to the slightly-bored, yet captivating expression.

Anyway, these snaps started to make me suspicious. We talk a lot about how Beyoncé might actually be some form of divinity, but could she (and her hair in particular) also be... well, a masterpiece? Goddess and masterpiece is a lot to pin on one person, but if anyone can handle it, it's Queen Bey — so let's check out all the times her hair qualified as a work of art.

1. At the Louvre in Paris

Seriously, though: That is some crazy-awesome face game (and her braid/hat combo is beyond adorable).

This wavy, chin-length bob looks awesomely retro on her.

4. At the 55th Annual Grammy Awards

Now that is a ponytail.

Now, this right here, is evidence of why people are always calling Beyoncé a goddess.

8. When She Debuted Her Baby Bangs

To borrow from serious art terms, the composition here... it's — it's simply **flawless.

12. Performing at the Super Bowl XLVII

Unflattering photo scandal aside, her hair is a definite A+.

13. In the infamous "Single Ladies" MV

Along with those ever-copied dance moves, her voluminous bouffant will never be forgotten.

Seriously, has she aged a day?

Now, that's what Katniss' Girl on Fire dress should have looked like — and Bey's wavy waterfall of hair totally beats her infamous side braid.

So, that was by no means an exhaustive list — but what's your favorite Beyoncé hair look? There are so many to choose from!