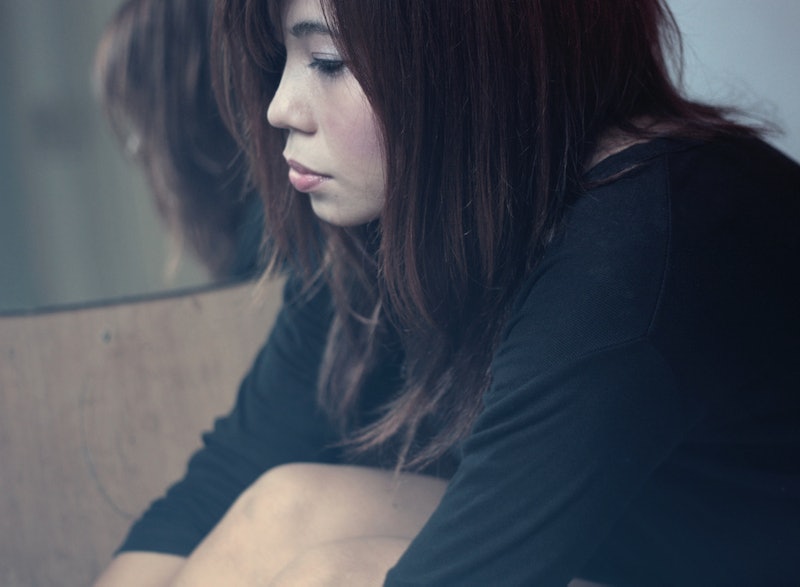 You already know all about sexy vampires — you've got your Cullens, your Salvatores, your entire-cast-of-True Bloods. Well, today, I'm here to talk about the mythical monster's unsexy real-life counterpart: the emotional vampire, also known as the energy vampire, also known as the person whose calls you screen religiously in order to protect your energy and mood. Whether or not you're fully aware of it, odds are high that you've got at least one of these IRL demons lurking in the folds of your life, weighing you down and harshing your mellow.

Energy bloodsuckers can be tricky to spot if you don't know what to look out for, and difficult to deal with even if you do (Wooden staking's off the table here). As someone who's known emotional vampires — and if I'm being honest, as someone who's been pretty vampiric during my dark-and-crawly phases — I can attest to the utmost importance of learning how to identify and protect yourself from these toxic influences.

That's why I put together a SparkNotes-y guide to help you to spot and manage the emotional vampires in your life, complete with sexy GIFs from The Vampire Diaries to restore your emotional energy or whatever.

Simply put, an emotional vampire is someone who zaps you of your emotional energy, according to Dr. Judith Orloff, author of the 2010 bestseller Emotional Freedom . "You'll know you've encountered one if you're immediately tired after talking to them, like you need a nap, or if you're feeling anxious, worse off than you were before," she says. "Your eyelids will feel heavy, you'll feel drained, and any negative physical symptoms you have will be exacerbated."

Orloff's book describes different types of emotional vampires, including critical know-it-alls, self-perpetuating victims, overbearing controllers, drama manufacturers, and narcissists. Summaries of these types and and coping strategies for each can be found here.

You probably do. "An emotional vampire can be anyone," says Orloff. "I once had a hairdresser who was so negative that I always left the salon feeling terrible about myself, and totally drained." See also: the acerbic aunt who keeps asking you why you're not married, the coworker who complains about her job until you're too exhausted to get your own work done, and the friend who thinks she knows more than you about absolutely everything and makes sure you know it.

It's possible you attract them—lucky you! "People who are very open and loving and give to everybody, people who are empaths, tend to absorb the energy of others into their own bodies," says Orloff, "and they'll find that all of the emotional vampires are drawn to them." Cool.

Certain experiences and events can draw emotional vampires out of the woodworks. For example, Jessica Handler, author of Braving the Fire , has encountered and heard tell of many an emotional vampire in her years of teaching writing classes about trauma and loss. "Some kinds of emotional vampires gather around people who are at their most vulnerable," she says, "and feed on their grief and loss." You'll recognize them, Handler explains, "by the way they push you to talk about something painful that you're going through, and the whole time, the conversation is never really about how badly you feel — it's all about them."

Other times when emotional vampires thrive: Family events. Orloff, poins to high-stress situations and hyper-negative relatives. "Talk to the host about seating arrangements at family dinners. You don't want to sit next to your critical Aunt Mabel."

Say it with me:

Yep, snipping these people right out of your life is the easiest way to protect yourself from them. Here's a personal essay about detaching from an emotional vampire to inspire you.

Nope, no way, can't cut this person out of my life.

Whether it's a coworker or an un-ostracizable family member, some e-vamps just can't be vanquished. In that case, "you'll need to learn to set limits boundaries," says Orloff. "And you have to be clear about them, because most of the time, these people don't realize what they're doing to you."

So how do you do that? It varies by the type of person, but whatever tactic you take, make sure you're firm, kind, and centered in your approach, because, as Orloff cautions, "because being snitty or angry or vengeful isn't going to work on an emotional vampire."

So, if someone keeps criticizing your weight, for example, that can mean saying, "Thanks for your opinion, but what you're saying is really hurting my feelings, and I would prefer that you don't talk about my physical appearance."

For a poor-me person, you might try, "I love you and you're my friend, but I can only listen for a few minutes unless you want to get into solutions." If your assertions go ignored, Orloff suggests reducing contact to the bare minimum — 15 to 30 seconds, tops.

You're not always dealing with straight-up Dementors here. "Emotional vampires aren't always terrible people," reminds Handler. "Sometimes they're friends of yours, and they're just trying to fill holes in themselves and using you as a coping mechanism. That doesn't mean they don't suck the life out of you, because they really do. They might not be good for you right now." Still, it's something to keep in mind before you go nuclear.

I never want to go through this again.

Feel ya. To protect yourself going forward, Orloff says, "You need to really plan in advance, and most importantly, you need listen to yourself." She suggests establishing your emotional limits and boundaries well before an emotional vampire enters the picture. That means taking some time to think about what your energy levels are like and what you're willing to put up with, and to devise clear but non-combative ways to articulate your limits.

When you see the signs of an emotional vampire, "be honest with yourself," says Orloff. "Say an affirmation: 'I'm not going to let emotional vampires drain my energy. These are the action steps I'm going to take in order to maintain or achieve emotional freedom.'"

To quote the well-worth-reading Emotional Vampires by Dr. Albert Bernstein:

If you see yourself among the vampires, take heart; it is a very good sign... If you recognize your own, they are apt to be less of a problem than if you have no insight.

Which is to say, if you're really worried that you're an emotional vampire, there's a pretty good chance that you aren't one. HOWEVER, if you're still concerned, check out this handy, legit quiz that doubles as a how-to-stop-being-the-worst guide by self-help writer Mark Manson. (Orloff has one, too.)

Unlike vampirism-vampirism, emotional vampirism isn't an immortal issue, and change is very possible. It'll take some work, but if you really commit to it, the day will come when you can say: