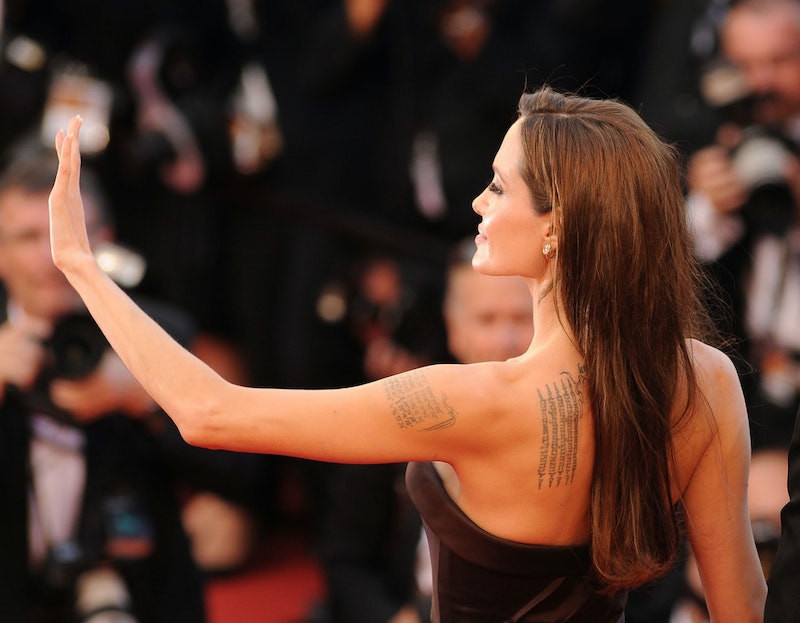 In 2014, tattoos are anything but the counter culture they once represented. It seems like everyone has tattoos and even A-list celebs sport multiple tattoos (some of which they regret), and big ones, too! One needn't look any further than Angelina Jolie, Miley Cyrus, Lady Gaga, Demi Lovato, Rita Ora, and Rihanna for evidence of lots and lots of tattoos. But even on the more local (read: non-celeb) level, women with tattoos are everywhere; ink is no longer the domain of sailors, circus freaks, or weirdos. In fact, having a tattoo, be it an homage to one's fans, feminist quotes, or something smart and literary, feels more common than being completely ink-free.

Still, the prevalence of tattoos does not make them readily accepted or prevent the non-tattooed from asking really annoying questions about someone else's body art. As someone with several tattoos myself, I get asked plenty of boneheaded queries about my pieces. Seriously, it's the type of pedestrian, ice-breaking, conversation-starting, small talk stuff that I can't believe that anyone in 2014 would even say, but it happens.

Here are 10 things women who have tattoos are incredibly sick of hearing. So next time you happen upon someone with a cool piece of ink and you want to approach them or start a discussion about the tattoo, for whatever reason, don't say any of the things listed below.

You may notice that "What's that mean?" isn't in the list of things not to say, despite it being an annoyance to many of my inked comrades. Honestly, even if it gets obnoxious after the 100th time, I think that's more than allowable — we get that you're just trying to be polite.

1. "What Happens When You Get Sick Of Those?"

Tattoos are permanent, so asking what someone will do with 'em is a question with no real answer. Plus, it assumes that the person with tattoos will get sick of their artwork. Sure, some people might opt for a coverup on a regrettable tat, but most are completely happy with their ink.

If you properly care for a tattoo, especially in the healing phase, your skin and the art itself will be bright, bold, and beautiful. Sure, you'll have to be more diligent with sunscreen to avoid any fading, but really, we should all be slathering on that SPF anyways.

This is my mantra: I'd rather regret something I have done than something I haven't done. So, no, I do not regret them at all. Most tattooed people will likely feel the same. Plus, why regret something you can't easily change? Isn't that the whole point of the popular Serenity Prayer and having the wisdom to know the difference about that which you can and cannot change and act accordingly? Or whatever?

Sure, I know tons of peeps who've broken the No. 1 Tattoo Golden Rule of never getting a significant other's name etched on their person, but a lot of people with tattoos look at their work as chapters in their life story. Just because something ends doesn't meant it no longer matters or should be forgetten. And there's always the option of a cover up with a cooler piece of art. So, what was that about regret, again?

Um, how about look freaking awesome? Just like so many people that populate my current generation, I will have cool artwork with me my whole life. When we're all octogenarians, we'll all have cool tattoos, even on our wrinkly skin. I mean, check out how badass this lady looks:

Nope, but thanks for asking!

This should be an intuitive answer. Needles injecting pigment into your skin hurts. Unless you get something the size of a quarter, the tattoo process is not annoying needle pricks. Sure, it depends on the location and size of the needle, but yeah, it freakin' hurts.

It's a seemingly innocuous question, but I feel like unless you want to go right to my artist, make an appointment, and get a tattoo because you love what he did on me, why even ask?

I am a grown-ass woman with my own home, my own bills, my own life, and have been for quite some time. My parents really don't have a say. Plus, if it was really going to make them disown me, I probably wouldn't have gotten any in the first place.

9. "How Do You Hide That When You Want To Get Dressed Up And Go Somewhere Nice?"

Who said anything about wanting to hide it? It assumes that you can't clean up nice and get all pretty with tattoos! I think tats are like accessories that enhance an outfit.

10. "Do You Worry About Being Unemployable?"

It's never been a problem and millions of people go to work, be it a federal office job or a retailer, with tattoos. They can be concealed if need be, but there are plenty of fine, upstanding people with tattoos. Besides, would I really want to work somewhere that saw tattoos as a negative? Probably not.