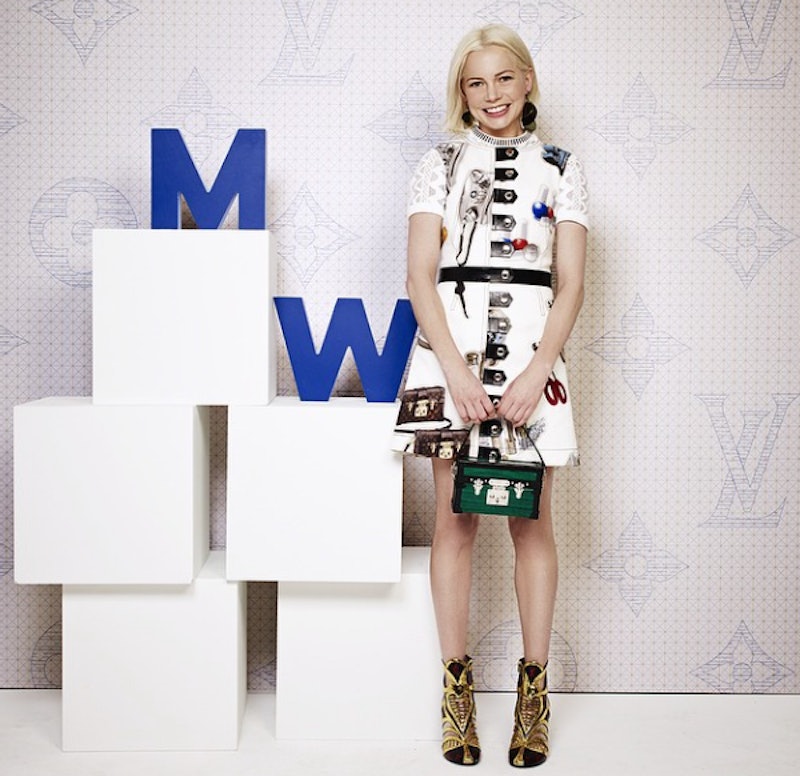 So that's how the fashion industry does a festive photo booth: legendary fashion photographers, and zero funny faces. I should've known. Louis Vuitton held their 160th anniversary celebration at the MOMA in New York, complete with a sumptuous dinner, a coterie of fabulously dressed guests, and a souvenier photo booth manned by renowned photographer Patrick Demarchelier. So, I’m guessing there was no option to get a funky border around your picture.

As InStyle reports, the fashion house headed by Nicholas Ghesquiere hosted the exclusive bash to celebrate the launch of their 160th anniversary capsule on Friday. For the capsule, Ghesquiere commissioned six “iconoclasts” including Karl Lagerfeld, Christian Louboutin, artist Cindy Sherman, architect Frank Gehry, and industrial designer Mark Newson to design a re-interpreted version of the classic monogram LV bag. One-hundred-and-sixty people were invited to the fete, including Anna Wintour, Ashley Olsen, Karlie Kloss, Nicole Kidman, Miranda Kerr, Michelle Williams, Chloe Sevigny. Fashion photo-world legend Demarchelier reportedly set up a pop-up portrait studio next to the bar and all the photos were posted to the Louis Vuitton Instagram. It’s just like we were there, guys!

Instead of using Groucho glasses and feather boas as funky props, the coven of VIPs at posed with the letters of their initials, in keeping with the theme of monogram. The result looked something like “The Letter of the Day” from Sesame Street, only Cookie Monster was nowhere to be found and everyone was wearing heavily embellished clothing.

Don't ever change, Karl. Really, though. This outfit isn't broken, so no need to fix it.

Olsen's look is a bit toned down as compared to her fellow partygoers, particularly that of her photo partner who's channeling King Joffrey's wedding day outfit.

As willowy and tall as always.

She never ceases to make my heart swell.

I dig the statement tights.

Just happy to be invited, as always.