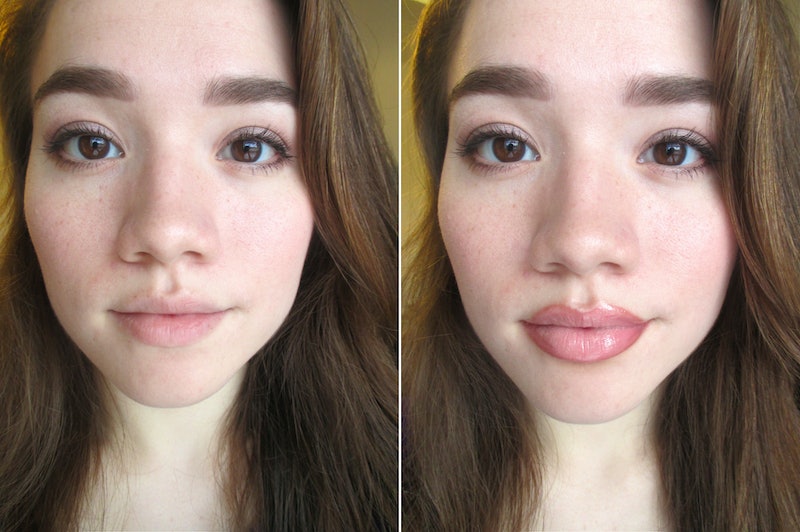 I have decently full lips, so I've never really considered trying to make them appear bigger than they naturally are. Well, the recent Kylie Jenner lip obsession had me wondering if it really is possible to make lips appear significantly larger, displacing some claims that she has had injections. As you can see here, it's definitely a thing. My lips appear to be totally swollen, and in my honest opinion, not cute. But since those interested in Kylie's lips seem to be more concerned with whether or not she had some sort of medical enhancement rather than how attractive the new size is, I figured it would still be interesting to know the source of curiosity about an altered physical feature.

My thoughts are that, since Kylie's enhancement is still attractive, people are more interested in what lengths she went to achieve it rather than simply appreciating the color of lipstick she chose on that particular day. In other words, people will be more willing to judge the means by which she acquired fuller lips than how her fuller lips actually look. On the other hand, going off the opinion that my increased lip size is not as flattering, I would anticipate those who see me in this way to be more interested in why I chose to alter my face in this way rather than how I did it.

I decided I wanted to see what people, both those who know me and complete strangers, thought of my artificially swollen lips. I visited with my parents, boyfriend, and a couple of friends (both male and female) to see what those who are accustomed to my appearance might think. And to see if I could gauge strangers' thoughts on my appearance, I visited my local Target, what I consider to hold a generally neutral collection of people, and my local Ulta, a place where I expected the more cosmetically conscious to be found.

My expectations were for my friends and family to laugh and question if I was confused and thought it to still be Halloween (they are all used to my sending pictures of various Halloween makeup that I like to try out). Regarding strangers, I expected more people in Ulta to notice, but to get more judging stares from people in Target. I didn't really expect strangers to make any comments, though.

The Reactions From People Who Know Me

As expected, those closest to me were not too shy to express how they felt about my changed face. Unexpectedly, though, one didn't even notice. Here are the reactions I collected from my friends and family:

Your lips are too big. You don't look like you. –Mom

Yes, my dad purposefully said "dat" instead of "that." And I'm pretty sure it wasn't a question.

Slightly surprised that this was all he had to say, I decided to follow this up by asking if they were too big.

They're definitely big. But they're not too big.

Umm, did you get stung by a bee? –female friend

What surprised me the most was the very distinct split in male and female opinion regarding my altered appearance. My mom's and best friend's shared opinion that my lips just looked outrageously too large was basically what I expected from everyone. So I was surprised when the males in my life had relatively neutral reactions. (Well, okay. My boyfriend is used to my experimentation with makeup by this point, so my surprise was actually unwarranted on his account.) But I think the fact that my male friend simply didn't notice and that my dad noticed but didn't care speaks volumes to the female preoccupation with the male opinion of makeup.

The Reactions From Strangers

Well, not too unsurprisingly, nobody said anything about my lips, except the lady checking me out at Ulta. Here are the reactions from strangers that I gauged to the best of my ability:

I passed a total of around 20 people, both men and women, in Target. Of these 20, only the cashier (who happened to be female) seemed to take some sort of interest in my appearance, and she was around my age.

The cashier who checked me out tilted her head at me a bit— kind of like how a dog tilts its head when it's confused. Other than that, she did not say or do anything that showed any sort of positive or negative judgement.

However, when I was taking my post-Target selfie, every person that passed me on their way into the store had some sort of expression on their face. And I was able to tell that there was at least confusion, humor, and disappointment in my selfie antics. So I guess actions speak louder than lipgloss.

I passed a total of eight people in Ulta, all of them women. Of these eight, there were four who seemed to take some sort of interest in my lips.

As I was wandering around, one of the associates asked me if I needed any help. It seemed to me that her eyes lingered longer on my mouth than my eyes, but she did not say anything about my lips, nor did her facial expression change.

As I continued along, two girlfriends, who I would estimate to be somewhere in their mid-twenties, seemed to mutter to each other after passing me in an aisle. Whether they were actually talking about me, I don't feel confident enough to declare, but I don't really see why else they would be muttering in an Ulta.

That's a nice shade; what lip gloss are you wearing?

I told her what gloss I used, and although she admitted to never having tried it before, I think she recognized that it is not a plumping formula. She continued to look back-and-forth between my eyes and lips during our brief exchange, but I cannot say whether it was because she actually liked my lip gloss, or if she was trying to tactfully learn more about what was going on with my lips.

Overall, there were some consistent reactions, though I wasn't able to collect enough to call any a trend. Although I did not come across any strangers younger than around 15 or older than around 60, only people in my general age group (ranging from late-teens to early thirties) seemed to notice. Additionally, as far as gender reception, males responded in a neutral to positive way, while females responded in a neutral to negative way. Of course, I was unable to obtain sample evidence from any male who does not personally know me, but the best conclusions I can draw from this is that females have a tendency to be more critical of other females than men do.

But I think the more interesting information that I got from this little experiment, was how little strangers actually care about other strangers' appearances. I had expected to be judged by strangers, but I had forgotten a very important piece of information — they're just that: strangers. They don't really care how somebody they have no personal interest in is acting or dressing if it's not wildly out of the social norm. That's what separates me from Kylie Jenner. I'm not a celebrity, so people who don't know me don't really care what I do or how I look if it's not directly affecting them. Further, people who don't know me also don't know how I look without my lips overdrawn, so there is nothing to compare to, and thusly, no change to judge.

Although I expected people to find my altered appearance comical, everyone seemed to take me seriously; which, although unexpected, I greatly appreciated. And honestly, while I found my own appearance a bit ridiculous at first, after wearing my lips like this for a full day, I'm already used to, and okay, with how they look.