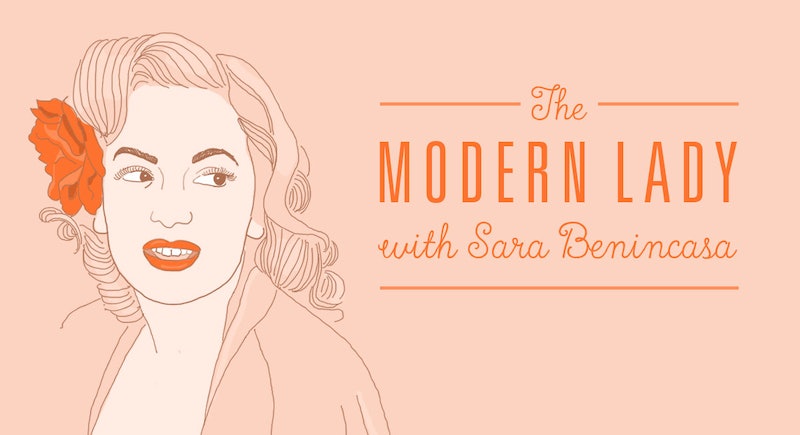 I like to think of myself as a low-maintenance gal, at least when it comes to my physical appearance. (My emotions are another story.) I don’t wear makeup every day. I don’t get my teeth whitened. I don’t get spray tans (I did it once as a stunt for an article, but that was just for laughs.) I don’t even wash my face – sounds disgusting, but I figure a good, old-fashioned shower takes care of whatever the city has done to my skin. I do go to the dermatologist, but only because I had a mild form of skin cancer when I was 17 and it seems like a good idea to keep on top of that sort of thing. Once in awhile, I’ll get eyelash extensions from the greatest extensionista in Los Angeles, Jackie O’Lashes, but that’s when I’m in LA., so it doesn’t count. I get my eyebrows sculpted (threaded, plucked or waxed) once in awhile. I get my nails did maybe thrice a year. I don’t wax my bikini line, primarily because I’m oddly uninterested in paying a stranger to pour a hot, molten substance over my most sensitive organ, wait for it to harden, and then rip it off in the opposite direction of hair growth. Call me crazy, but I would rather spend my money on, uh, anything else.

But when it comes to the other type of hair – the hair on my head – well, all bets are off. This is the one way in which I am admittedly, proudly high-maintenance. You may think it makes me superficial, but I can assure you that I am very, very deep.

God, do I love the hair salon.

I mean, I love it. Everything about it.

I love the aesthetic. I love the chatter and the gossip and the sound of stylists shouting over hair dryers. I love the oft-dramatic relationships between assistants and stylists. I love the great piles of hair on the floor, useless as a hermit crab’s old shell. I love the shelves full of product, with their promise of a softer, cleaner, prettier, you-ier you. I even love the chemical smell of hair dye.

I would get my locks dyed, chopped, lengthened, straightened, or otherwise altered every single day if it wouldn’t destroy my hair (which it totally would.) To me, the hair salon is a magical cave of wonders where one enters as a big lump of clay and emerges as a fully-realized sculptural masterpiece. It is the cocoon in which I undergo regular transformation. It is my safe space. It is my church, if church involved the purchase of various conditioning salves and goos. Verily, the hair salon is my home.

I can chalk at least some of this fondness for the salon environment up to the fact that I basically grew up in one. Back home in New Jersey, my mother has a small group of longtime BFFs, among them a stylist who prefers to be called just "G", and Karen, a nail tech and aesthetician. Growing up, I spent countless hours sitting in unoccupied swivel chairs, absorbing stories and laughter in the converted house where they plied their trade. My mother would always complain that she hated the smell of hair dye, and would periodically eschew it in favor of going gray. But she always went back to her original black hair, saying my father preferred it that way.

My father, the redhead, got his hair cut by G too, the haircut changing little from when he was a low man on the corporate totem pole to when he hit middle management to when he became an upper-level manager to when he became a global vice president. He liked it the same way, year after year, and that’s what G delivered, with precision. He never seemed to go gray and he never seemed to lose much of his hair (although he claims he has much less than he used to.)

G cut my paternal grandfather’s hair until he died and she did my paternal grandmother’s hair on the day of his funeral, and she did my hair and my little brother’s hair throughout our childhoods. Her life, replete with boyfriends and dates and a pretty daughter a few years older than me, seemed glamorous to me. She was always engaged in one adventure or another, and I grew to admire her unceasing work ethic as well as the huge batches of cookies she made each Christmas.

Even before then, when I was very small indeed, my grandmother Rose had a kind of salon in the basement of the home she shared with her sister Irene and their mother, Lillian. The family had owned an actual salon years prior, but in their retirement they continued to do hair from the humble cellar in that old house on West Main Street in Bound Brook, New Jersey. I couldn’t have been older than three, but I vaguely remember the terrycloth towels and the sink where they shampooed the clientele (who I'm pretty sure consisted entirely of friends who lived nearby.) I think there was a clothesline in the basement to dry delicates during the cold months, and I recall the clothespins, and I may or may not have seen foils or curlers or bobby pins. It’s all hazy, like a half-remembered dream.

Anyway, every hair salon in the world is basically the same as my family’s basement salon: You’ve got your regulars, your occasionals, and your one-time-onlies. You’ve got gossip and you’ve got competition and you’ve got drama and resentment and sometimes great and glorious victory over unruly curls or stubborn cowlicks. The mightiest victory of all comes when a client enters the salon as a grumpy, unhappy mess and floats out, happy and pretty. Whether the joint charges $30 for a haircut or $300 for a “shaping session,” whether they offer you Chateau Diana or Cristal, whether their coffee is Sanka from a pot or organic brew from a French press, a salon is a salon is a salon. Don’t be fooled by the fancy trappings. Somebody still has to sweep up the dirty, wet old hair from the floor. Somebody still has to spend all day washing and drying the same towels over and over again. Somebody still hates – and I mean hates – somebody else’s guts but deals with them every day because that’s what you have to fucking do.

I’ve been to salons in Los Angeles and Oslo, Amsterdam and New York, Indianapolis and Boston and Houston and Newport Beach and New Orleans and Asheville and Austin and Princeton and I-don’t-know-where-the-hell-else. It’s always the same. And I always love it.

I travel a lot, touring bookstores and little theatres and colleges to tell stories and sign books and do whatever other clownish/artsy wackiness I’ve gotten myself into. And no matter where I am, I know I can always find a little piece of home. It might smell like Redken hair dye or Aveda conditioner, and it might be cheap or it might be pricey, but it’s where I feel like I belong. And you can’t put a price on that feeling – although if you could, you’d better factor in a 20% tip. It’s only polite.

More like this
Your No-B.S. Guide To Female Pattern Hair Loss Treatments
By Parizaad Khan Sethi
15 Must-Have New Beauty Launches, According To Our Editors
By Rachel Lapidos
This Week’s New Makeup Releases & More Beauty Headlines
By Audrey Noble
The Chicest ’90s Updo Hairstyles To Try
By Paris Giles
Get Even More From Bustle — Sign Up For The Newsletter