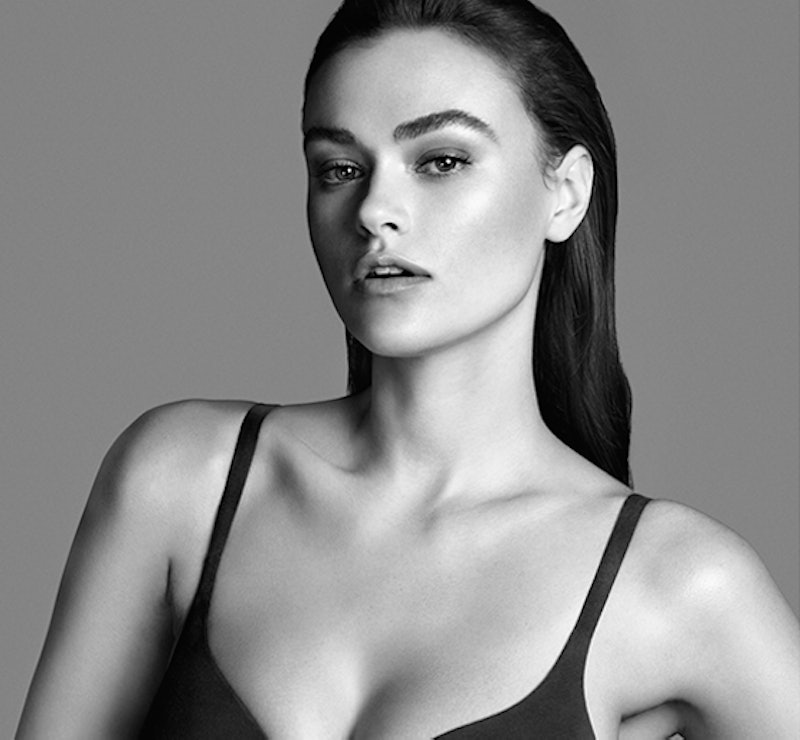 It wasn't long ago that I would look upon the photo of a "plus-size" model (usually a woman ranging between a size 4 and 8) and grimace. I'd quickly become enraged at the idea that such a woman, whose tummy was flat, legs were long and rib cage was protruding, could be considered remotely "plus-size" or large. My mind would begin revolting at all the impossible notions of beauty that women, and often men, are expected to subscribe to. If these models were "plus-size," a term so often synonymous with being fatter than the acceptable norm, what hope did anyone larger have of feeling accepted? Myla Dalbesio's Calvin Klein campaign has re-opened this question, but after the plus-size model's Elle article, my sentiments are far more positive than they would have been circa 2012.

In the fashion industry, the reality is that Dalbesio (at a size 10) is considered plus-size. She told Elle, “It’s kind of confusing because I’m a bigger girl. I’m not the biggest girl on the market but I’m definitely bigger than all the girls [Calvin Klein] has ever worked with, so that is really intimidating.” Looking at the photos of Dalbesio in Calvin Klein's staple briefs, it seems perplexing that this woman — so tall, so svelte — is the biggest woman the brand has ever hired to model for them. But then again, Calvin Klein has launched the careers of straight-size modeling queen-bees, like Kate Moss and Brooke Shields. In comparison, Dalbesio stands out. She is bigger than these women. Not big. Not remotely big. But bigger. And that fact is actually quite noteworthy. For such a popular, high-street name to embrace a model outside of their prototypical size-2 mold is still a great thing.

Thus far, there's been some outrage at Calvin Klein for labeling Dalbesio plus-size. As usual, folks have taken to Twitter:

I get it. I really do. It's hard not to get upset when a woman who is so obviously a thin woman gets lumped into the plus category, serving as further evidence that society is continuing to promote an unhealthy view of weight and body image. But the backlash against Calvin Klein isn't really appropriate. The company didn't brand Dalbesio a plus-size model. They didn't even make a big deal out of using her in the campaign. As Dalbesio mentioned to Elle, "It’s not like [they] released this campaign and were like, ‘Whoa, look, there’s this plus size girl in our campaign.’ They released me in this campaign with everyone else; there’s no distinction." Dalbesio's plus label comes not from C.K.; it comes from the industry. An industry where the definition of plus-size has always differed from the majority of the definition of most rationally-thinking people of the world. And whilst it would be a beautiful thing for industry definitions to start changing, it's probably going to take a lot more time, and the help of a lot of in-betweeny models like Dalbesio, to get things moving.

The simple truth is that the fashion industry, for the most part, is still scared of incorporating plus-size models. I don't know why that is. A repeated excuse is "the cost of producing more garments in larger sizes," — an excuse that always seems ridiculous when coming out of the mouths of multi-millionaire designers. My guess is just that being fat is still stigmatized, and the designers and brands don't want to deal with the possible backlash of using a fatter model. Honestly, I think ModCloth has proven that incorporating a large size range and a variety of models only leads to financial success. Not to mention the adoration and respect of the consumer. But the point is, designers are still scared. So maybe the baby step on the road to size inclusivity is the incorporation of in-betweeners: the models like Dalbesio, who aren't quite straight size or plus-size, but still represent quite a large population of women.

In her New York Times article on the subject, Vanessa Friedman suggests that Calvin Klein has been targeted for this campaign due to the "assumption when it comes to fashion that designers and the houses they shape (literally and metaphorically) are the driving forces behind body dysmorphism." Historically speaking, fashion designers and brands, like celebrities and the lack of size diversity in films and television, are partly to blame for our unrealistic and often unhealthy views on what it means to be beautiful. But something Dalbesio pointed out is that after Vogue Italia's legendary June 2011 issue (which featured plus-size models Tara Lynn, Candice Huffine and Robyn Lawley on its cover), there seemed to be a trend toward plus modeling. And whilst at times since, it's felt like that trend was disappearing, it's certainly picking back up again. Maybe the fashion industry has been responsible for a lot of body dysmorphia. In fact, we pretty much know that it has. But that's why it's important to be pleased, and proud, when a larger model lands a big campaign or magazine spread... even if she's not a size 18. It's a sign that things are changing. Maybe it's not a total industry re-vamp, but it's something.