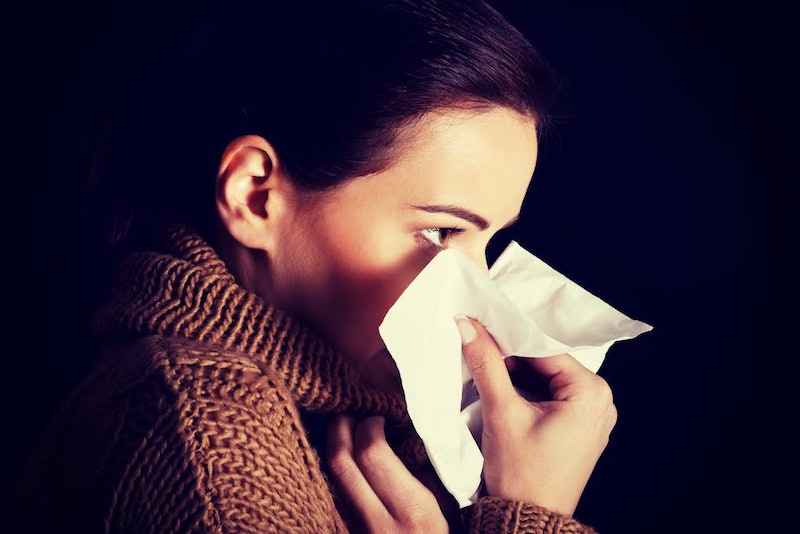 During my first stint in New York City, I was sick constantly. Every time I'd think I was over a cold, a new kind of cough would pop up less than 24 hours after I was convinced I'd been healed. After I left NYC to move to the west coast for a while, it became obvious that it wasn't just the congested subways filled with germs or my somewhat-fast lifestyle in my twenties that were to blame. Give me stress and you will see my body completely shut down. After an unbeatable cold, I realized it wasn't just the winter blues keeping me sick the entire season. What really helped me kick colds once and for all was after I started feeling better, I ditched or cleaned almost all the clothes and makeup I used during that time to avoid getting sick again. The great news is that you don't have to throw out all your makeup or burn everything in your room after an ailment, but sadly, you can't just pick off where you left off either. There are some beauty precautions worth taking after you beat your next cold.

When I moved back to NYC, I crawled on a very high horse and proclaimed that I never got sick anymore. You know, mind over matter and all. After months of pretending I didn't have the immune system of a tiny baby, I came down with a case of the flu that had me literally hallucinating for three days.

I blamed my deathly ill coworker that came to work with a gruesome flu, somehow thinking she was doing her team a favor by coming in half-dead and fully contagious. After I survived the flu, I went through my sanitizing routine and was back to work on Monday, fully motivated and healthy, only to realize the same person who gave me the flu was at work with bronchitis. It was absolutely time for an intervention: We forced her into a quarantine in her own home where we would be safe from her lethal germs.

More importantly though, we had a stern talk with her about the beauty items she should ditch or clean immediately after she started feeling well to avoid being sick the entire winter. To be honest, we were equally terrified of doing her work as we were of her seemingly fatal cough. Here are some items worth a chuck in the garbage or disinfecting to make sure those germs are out of your life for good!

If you wake up one morning and there is a slight tickle in your throat, your first thought isn't Gee, I should probably not use my super expensive, best colored red lipstick. The good news is that you aren't likely to re-infect yourself by using the same lipstick from when you first came down with a cold. Even better news is there is a trick to save those prized lipsticks; simply cut the first layer of the lipstick off with a sharp tool to ensure that it's germ-free!

Yes. You should most definitely throw out your toothbrush. If you're like me, you have your toothbrush on a cutesy little holder that sits on your bathroom sink, which is exposed to loads of bacteria. According to sources, viruses from your mouth can hang out in the bristles of your brush for weeks! Even though some argue that it's perfectly safe to keep your toothbrush after an illness because they are your own germs, I say eff that. Toothbrushes are cheap and being sick is NOT.

Whenever I'm sick, I live in the same leggings and Anti-flag sweatshirt until I feel better. Showering and changing my clothes is a laughable concept while I Google "Am I dying?" from my bed. Obviously, those clothes need a good washing after I'm feeling better. Just because you start to feel better, doesn't mean that your immune system is totally back to normal. This definitely doesn't mean washing everything in your wardrobe, but a fresh load of laundry with towels, items casually tossed on your floor, or bathrobes you wore should definitely take a trip to the cleaners.

Ugh, let me tell you something about Flu Kristin: She was disgusting. I had tissues all around me, brutal coughing fits while shivering AND sweating under my covers and when my roomie brought me soup? I sobbed into it and then spilled it everywhere. So, of course, when I was feeling better the first thing I did was wash my pillows, comforter, and sheets in hot water to get rid of my own germs and the bad energy that was seeping out of my satin thread count. This will also give your mattress a chance to catch its breath after you've been smothering it for three days while you were no doubt sleeping the days away.

Real talk: You should be cleaning your makeup brush after each use. I know, I know, ain't nobody got time for that, but makeup, dirt, and bacteria DO live in your brush and I know you aren't trying to put dirt on your clean face. This is especially important if you were sick and used your makeup during that time. You don't have to ditch all your makeup brushes as you get better, but you can give them a nice soak in tea tree oil or apple cider vinegar to make your brush good as new.

You may not think that you've infected your mascara during your last bug, but one of the fastest ways to give yourself a sty or other eye infection is through old or infected eye makeup. For instance, you may think of pink eye as strictly bacterial, but another form is viral conjunctivitis which can occur during a simple cold. Since I never throw out my mascara after the recommended time, which is 2-3 months, I definitely do after a virus.

Anything you put near your eyes or mouth is worth suspicion after an infection or virus. Fortunately, you don't need to throw away these beauty essentials — you can simply sharpen your pencils to get rid of the top layer you most likely tainted. For liquid liners, Video Jug's website suggests using baby wipes for cleaning eyeliner brushes. You can also purchase disposable brushes, since you should be switching up your brushes frequently anyway.

By the way... I'm not a doctor. Clearly. So if you are suffering from an extended cold that just won't go away no matter what grooming items you clean or toss, you should probably head to the clinic just to make sure it isn't something serious.

More like this
15 Must-Have New Beauty Launches, According To Our Editors
By Rachel Lapidos
This Week’s New Makeup Releases & More Beauty Headlines
By Audrey Noble
Everything You Need To Know About Ephemeral Tattoos
By El Hunt
Jecca Blac’s New Brow Drop Was Inspired By Your Fave Drag Queens
By Justine Knight
Get Even More From Bustle — Sign Up For The Newsletter