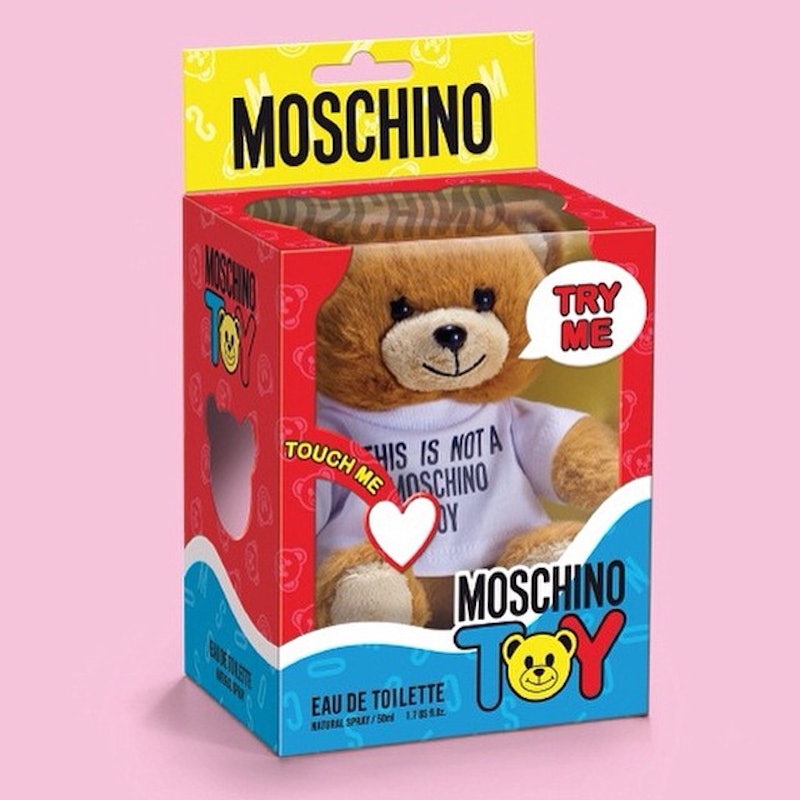 Jeremy Scott's love affair with pop culture — namely children's toys — doesn't seem to be slowing down. In September the designer revealed a Barbie-themed collection for Moschino Spring 2015 and partnered with Miley Cyrus on some weird plastic toy jewelry for his eponymous runway presentation. Playtime continues with Jeremy Scott's first fragrance for Moschino, which is all dressed up like a teddy bear. I guess glass bottles just aren't avant garde enough?

The unisex scent is aptly called Moschino Toy, although the packaging comes with a t-shirt that declares the contrary (it literally says, "This is not a Moschino toy"). Scott's playful influences might sometimes result in some bizarre merchandise, but hey, at least his designs are never dull. Take the Moschino Toy ad campaign, for instance. A Steven Meisel image posted to Scott's Instagram features Isabeli Fontana with a string of the bear bottles draped elegantly across her shoulders, a bear head in one hand, his spray-bottle body in the other.

Moschino Toy is available on moschino.com for $110 (you're paying for the novelty here, no doubt), although it's currently sold out. There's no word yet on what the fragrance smells like, but I'm willing to bet no flowers were involved in its making. McDonalds french fry grease, on the other hand, seems much more likely.

More like this
How To Get Your Hands On The Pat McGrath X Supreme Nail Kit
By Justine Knight
Prefer Alcohol-Free Perfumes? Water-Based Fragrances Are On The Rise
By Audrey Noble
15 Chrome Nail Polish Colors For An Easy, Mirror-Like Manicure
By Audrey Noble
The 30 Best Fall Fashion Finds, Straight From Bustle Editors
By Kelsey Stiegman
Get Even More From Bustle — Sign Up For The Newsletter