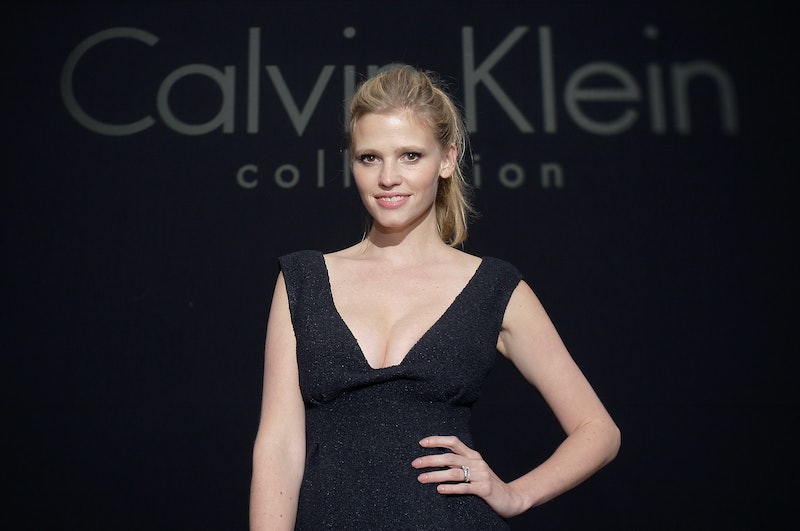 In this age of Photoshopped perfection, it's rare to see an image of a model or celebrity that hasn't been unduly modified with a little nip there or a flash of illumination there. However, Lara's Stone's un-Photophopped Juergen Teller-shot Clavin Klein photo spread for System Magazine presents a rare, unedited glimpse into what a woman's body looks like without the aid of an Instagram filter or the virtual liposuction of a smart computer. The model, who gave birth to one-year-old son Alfred after temporarily relinquishing her modeling career due to weight gain, bravely placed her post-pregnancy body on display clad in little more than Calvin Klein skivvies for the System spread.

Be forewarned: Stone's shoot is an NSFW, skin-to-the-wind ode to poise and boldness. Most female celebrities and models strategically select the day on which they debut their post-baby body as a date when they're nearing their goal weight and have indulged in their fair share of grueling two-a-day personal training sessions, laser resurfacing, and body facial. The moment you lay eyes on Stone's shoot, it becomes abundantly clear that Stone's intent was not to mock the general public with such illusory trickery. And the authenticity of the photo shoot makes it all the more beautiful. Though Stone remains amongst the legions of seemingly untouchable beauties who even a 100 pound weight gain could not fell, her honesty in presenting a post-pregnancy body with its changed topography and what society may deem flaws is downright heroic.

Check out some of the shots below, then head over to Refinery 29 for the rest of the shoot.