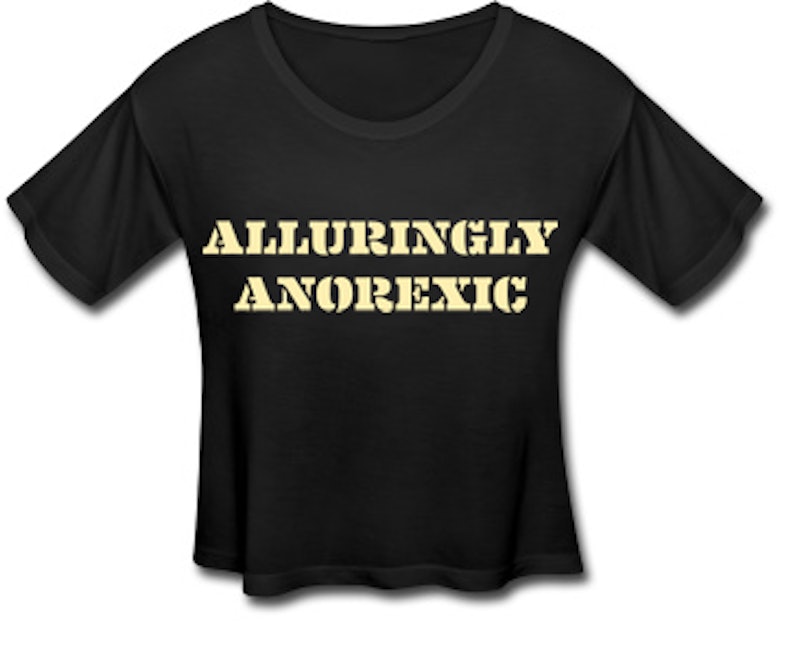 No, no, no, no! Another brand has come under fire for allegedly glorifying eating disorders. According to Refinery 29's Kelsey Miller, Spreadshirt.com has been selling shirts with pro-ana slogans and people are pissed. As they should be, because life-threatening diseases such as anorexia and bulimia should not be taken lightly. Have we learned nothing from the Urban Outfitters "Eat Less" disaster of 2010?

The tees and sweatshirts, designed by an artist named Ioana Urma, are pretty basic. Then there are the phrases printed across the chests in bold letters, things like "Alluringly Anorexic," "Exquisitely Malnourished," and "Fashionably Famished." If it seems outlandish to you, you're not alone. Matan Uziel started a Change.org petition to get the shirts removed from Spreadshirt.com, writing, "Not only are these slogans not clever, they are appalling and inconsiderate."

There's some speculation as to whether these shirts are actually meant to raise awareness about the terrible reality of eating disorders, not to glorify them. Spreadshirt CEO Philip Rooke responded directly to the petition, saying:

The specific shirts mentioned are part of an artist’s work challenging people to consider body types and the impossibility of conforming to being a super model. The point of the art work and shirts was to raise awareness of the issues. The slogans are disturbing and thought provoking. Art is not about being politically correct but pushing people to think.

But, as Miller points out in her thoughtful piece on the issue, the intent doesn't really make up for the harm done by these messages. While a blatantly subversive slogan like "Glamorously Atrophied" might work in an art gallery, on a t-shirt it just gives the terrible impression that eating disorders are something fashionable and worth coveting. I can always appreciate a bit of risky art, but who's to say that teenage girls doing some online shopping will be in on the "joke" when they see a pink crew-neck labelled "Beautifully Bulimic?"

If Spreadshirt is to continue carrying Urma's designs, they need to provide some context. A disclaimer or a link to the National Eating Disorder Association website would at least begin to explain that the artist and the website are not promoting body image issues and the dangerous behaviors that often spring from them. Personally, I believe the shirts should be pulled. Girls and women receive far too many mixed messages already. We don't need one more.