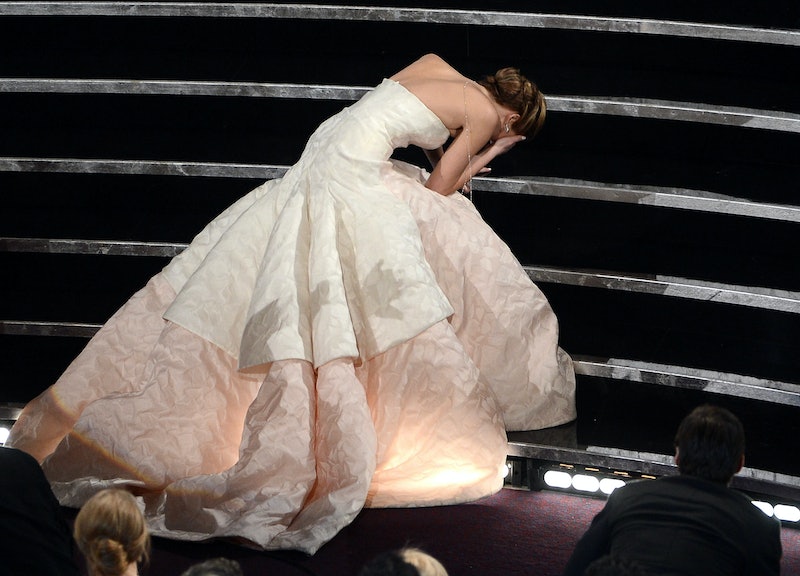 Trotting around in five-inch heels and full-skirted ball gowns is a recipe for the occasional sartorial disaster when it comes to red carpet appearances. No one knows this better than America's beloved, accident-prone sweetheart Jennifer Lawrence. Wardrobe malfunctions seem to be Jennifer Lawrence's bread and butter, the latest of which caught Lawrence unawares at the Hunger Games: Mockingjay Part 1 premiere shindig. Unlike her more reticent colleagues, Lawrence embraces each embarrassing episode as a chance to make light of her public life and thinly veiled clumsy streak. We should all be so self-depricatingly charming in such humiliating moments.

Somehow, each incredibly well-publicized moment imbues Lawrence's fans with a new parable-like lesson on social decorum and grace, which Lawrence herself balances with a dose of endearing humbleness. Be careful when ascending stairs, millions of viewers learned from Lawrence's tumble at the 2013 Oscars. Keep your eye on the ground instead of the paparazzi, red carpet spectators noted at the 2014 awards. And as the world learned last night, fashion tape is the only wardrobe essential necessary for red carpet appearances. Here are 5 times Jennifer Lawrence transformed wardrobe malfunctions into sheer comedic genius. May she keep Hollywood in stitches for years to come.

Though her sultry, deeply cut cream Mugler gown lit up the red carpet at the November 10 premiere of Hunger Games: Mockingjay Part 1, it did little in the way of actually clothing Lawrence. Whilst the actress made a quick getaway from the film's after party, the paparazzi managed to capture the dress gaping at its plunging neckline to expose more of Lawrence's skin than anyone expected to see. However, the actress quickly sped away from the scene with Lorde in tow, a broad, quirky smile across her face.

Though not technically qualified as a wardrobe malfunction, Jennifer Lawrence's epic fall on the red-carpeted stairs to accept her Best Actress Oscar for The Silver Linings Playbook in 2013 was more than tangentially related to her voluminous Dior gown. Nevertheless, Lawrence provided an unassuming and comical elucidation of the mishap, telling W Magazine,

I was at the Oscars, waiting to hear if my name was called, and I kept thinking, 'cakewalk, cakewalk, cakewalk', I thought, 'Why is cakewalk stuck in my head?' And then, as I started to walk up the stairs and the fabric from my dress tucked under my feet, I realised my stylist had told me, 'Kick, walk, kick, walk.' You are supposed to kick the dress out while you walk, and I totally forgot because I was thinking about cake! And that's why I fell.

Though Jennifer Lawrence's Christian Dior gown was reported to have ripped on her way to the 2013 SAG Awards stage, in fact it was just the frock's transparent lining that revealed a thigh-high sliver of skin when the garment's fabric snagged as the actress got up from her chair. However, Lawrence collected herself and marched up to the platform, poking fun at her accident-prone nature after the fact.

4. THE OTHER OSCARS TRIP

Lawrence didn't fare much better at the 2014 Oscars, taking a full plunge on the red carpet in her elegant crimson Christian Dior column gown. After the fact, Lawrence ruefully explained to the press,

This year I actually did a stair test out on the back staircase and got it a little dusty, but it worked. But I did trip over a cone, so I guess…I’m not safe.

Nevertheless, Lawrence took playful jabs from host Ellen Degeneres and other colleagues with a self-effacing smile as the evening progressed.

Again, one couldn't exactly call the nude iCloud photo hacking a wardrobe malfunction, but rather an issue of lack thereof. When Lawrence's nude photos fell prey to the 2014 hacking, Lawrence chose a pragmatic and comical approach. In addition to calling the violation of privacy "disgusting," the actress also lightly referenced her need to keep the spark alive in her relationship with Nicholas Hoult as the reasoning behind the photos, telling Vanity Fair ,