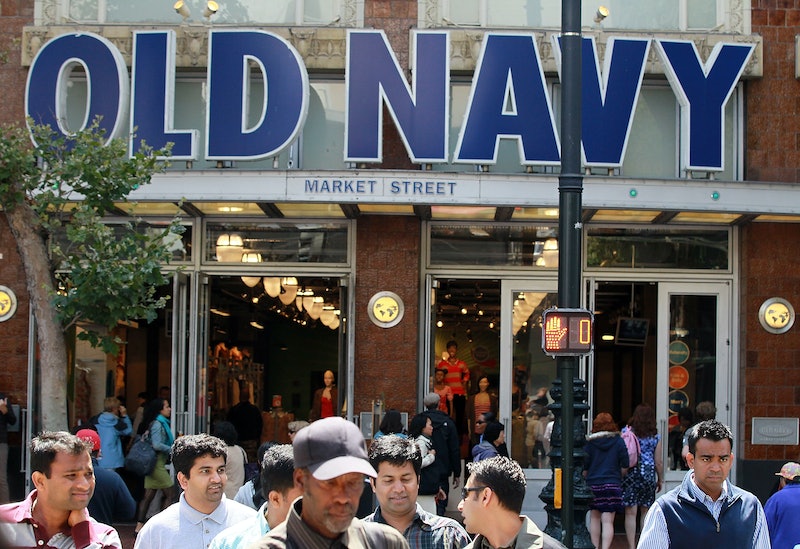 Plus size fashion has been in the news pretty consistently for a few years now. Whether discussing the need for more plus size retailers or celebrating the success of models who break the super-skinny mold, we all have become accustomed to seeing the term 'plus-size' thrown around. Even though there's a long way to go, many retailers have responded to the public's need for more plus-size options when it comes to shopping. One such retailer is Old Navy. Owned by Gap, Old Navy offers both men's and women's plus-size clothing — the only problem? The prices differ. While the store's men's plus-size clothing sells for the same as men's standard sizes, Old Navy's women's plus-size clothing will cost you more than if you were buying the standard-sized counterparts. And people aren't very happy about it.

Let's think about this for a second. First, there is the struggle to get brands to recognize the plus-size market as something both necessary and, surprise, lucrative. Second, there is the struggle to make those styles actually attractive and stylishly relevant. And now, women are expected to actually pay more for their jeans while plus-size men and "regular" size women save some money?

The discrepancy in cost was first noticed by people at BuzzFeed who spotted a Change.org petition (isn't that how every issue is solved these days?) aiming to stop the brand's plus-size "up-charging." The petition currently has with over 17,500 signatures, according to the site. The petition also mentions that the Old Navy site goes as far to separate women's plus-size clothing from "regular" women's clothing, yet leaves the men's options — plus-size and "regular" (whatever that means) — together.

Renee Posey, the author behind the original Change.org petition, wrote that she thinks the differences between the men's and women's plus-size brands is not only unfair, but offensive.

"I don’t understand why myself and women like me are being singled out and forced to pay more by Old Navy, when our male counterparts are not. This is entirely unfair and offensive on many levels," Posey said. "For a company like Old Navy, who claims to be inclusive and strives to provide affordable clothing for everyone, this practice completely undermines their mission."

A representative from Gap, which owns Old Navy, responded to the controversy by claiming that the plus-size women's clothing features design and manufacturing differences, while the plus size men's does not.

"Old Navy is proud to offer styles and apparel designed specifically for our plus-size female customer, which includes curve-enhancing and curve-flattering elements such as four-way stretch materials and contoured waistbands, which most men's garments do not include," said Gap's spokespeople in emails to both the Huffington Post and BuzzFeed.

Initially, it's true that the entire practice seems unfair. But when you take into consideration that Old Navy seems to be, at least in the case of plus-size women, catering to a woman's curves in unique, innovative ways that just happen to cost more, it seems a little less offensive. Look at it this way: What Old Navy has done is go out of their way to create new jeans that specifically aim to flatter plus-size women, rather than just reproducing the styles they already had in simply larger sizes.

Granted, "out of their way" is in tune with "making more money," but the point is that they're trying to create styles that truly work with a plus-size woman's body, rather than assuming that the same structure of a size-four pair of jeans will look good on a plus-size woman. To me, this shows that they actually care about pleasing and flattering a demographic of women that deserves stylish clothes that they feel great in, rather than about just selling clothes. And yes, this costs us a little more — because it costs them a little more. If, like Old Navy has said, there aren't the same changes in the men's styles because those plus-sized jeans are made in the same way as the standard-sized jeans, then it would make sense that they are the same price as the standard sizes.

However, when it comes to the "plus-sized women's clothing being in a separate section, while men's plus-sized isn't" discrepancy— now there's a problem. That has nothing to do with the cost of manufacturing and everything to do with the fact that we, as women, have had to get used to the term "plus-size" (and realize that there is absolutely no shame in it), while men haven't. There is no reason for one section to be separate and the other to be hidden away in the "standard" men's sizes.

While Old Navy may or may not be able to cut manufacturing costs down on women's jeans in a way that still creates a product that's flattering to plus-sized women, they can certainly work on equalizing how their clothing is sold online and presenting a more balanced, fair variety of plus-sized clothing. That, at the very least, seems more than doable.