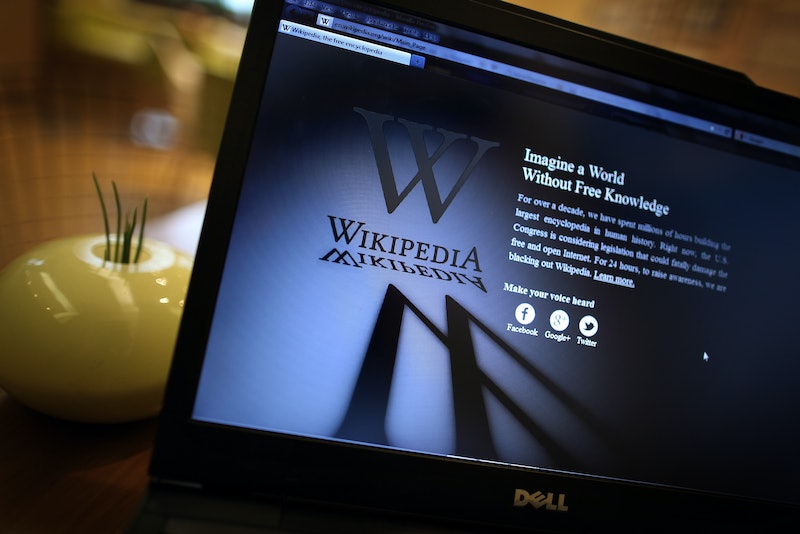 I think we can all admit that Russia's had quite a few whacky ideas of late. I'm not even talking politically (although, yes, also politically). There were those sad space sex geckos, for example, or that bizarre amusement park. Or that suggestion of inseminating all Russian women with President Vladimir Putin's sperm (the horror of it). But really, this one just takes the cake: Russia is creating its own "alternate" Wikipedia, because apparently the normal — American — Wikipedia is too "unreliable." (Hey, remember when Putin said the internet was a "CIA project?")

On Friday, Putin’s Presidential Library made the following, sinister announcement: "The creation of an alternative Wikipedia has begun." Its aim? To portray Russia "objectively and accurately" — because, you know, normal Wikipedia just isn't reliable enough (cough, flattering, cough). The site is being put together by the National Library of Russia and the Boris Yeltsin Presidential Library; already, tens of thousands of books and documents have been amassed in order to detail the country.

Said the library in a statement:

The initiative will be an alternative of Wikipedia: the analysis of this resource has shown that it does not have enough detailed and reliable information about Russian regions and the life of the country ... Integration of unique materials on the regions in a single electronic encyclopedia will allow to objectively and accurately present the country and its population, the diversity of the state, the national system of Russia ... As expected, the regional electronic encyclopedia will be one of the most popular Russian Internet resources.

In spite of this, let's get real: the chances of a creepy, government-linked, "alternate" Wikipedia actually succeeding are slim. For one thing, it's still going to rely on an open editing feature — which is, as any high-schooler will tell you, precisely what makes Wikipedia so unreliable, while also making it a great source of information. If accuracy is what the Kremlin is worried about, then having an open editing system doesn't really make sense. They might as well stick with the original Wikipedia, which is the 6th most popular site in the world.

In all likelihood, this site will go the way of Sputnik, the intended Russian alternative to Google launched last May, which you've probably never heard of and will probably never think of again. As Kevin Rothrock, RuNet Echo project editor at Global Voice told Newsweek Europe:

I don't think the politicians honestly expect a government-sponsored Wikipedia alternative to take off. I think a Kremlin-orchestrated Wikipedia alternative is doomed to be both a failure and a laughing stock, which is how I would describe ‘Sputnik’. The authorities can make these services the default on computers at state facilities, offices and schools, but it's easy to navigate away from these pre-settings.

More like this
This Is When Netflix Is Going To Start Charging You For Sharing Passwords
By Darshita Goyal
How To Help Those Affected By The Turkey-Syria Earthquake
By El Hunt
6 Organizations Fighting Police Brutality That You Can Support Right Now
By Syeda Khaula Saad and JR Thorpe
Eurovision Has Been Given A Whole New Look Ahead Of Its Liverpool Debut
By Bustle UK
Get Even More From Bustle — Sign Up For The Newsletter
From hair trends to relationship advice, our daily newsletter has everything you need to sound like a person who’s on TikTok, even if you aren’t.