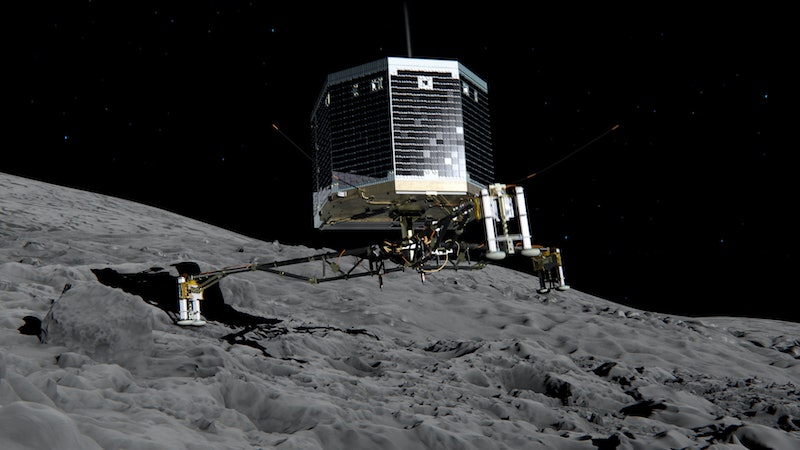 Earlier this week, the world watched with bated breath as the European Space Agency (ESA) made history by landing its fridge-sized craft, Philae, on a comet. Over the last two days, data and breathtaking photos from the 67P/Churyumov-Gerasimenko comet have made it back to us on earth thanks to Philae, taking us all to a place that has never been possible before. Sadly, though, that may be over, at least for now: on Saturday, scientists lost contact with Philae after its battery died.

It’s not that the mission is now disastrously over, but the issue is this: Philae is solar-powered, and needs 6-7 hours of sunlight in order to charge its batteries. But when it landed on Wednesday, it settled next to a cliff that's been mostly hidden from the sun — so it's been getting about an hour and a half of sunlight per comet day. Which just hasn't been enough. Tragically, when the ESA tried to establish communication with the lander on Saturday morning, they got no signals.

"Philae has fallen into 'idle mode' for a potentially long silence. In this mode, all instruments and most systems on board are shut down," the ESA said, according to CNN.

On Friday, the ESA tried to fix the problem by attempting to rotate the craft and thus pull it out of that particular piece of shadow, with its solar panels towards the sunlight. Still, even it manages to position itself correctly, it's not a quick fix — it could be months before the batteries are charged up again. Writes the ESA on its blog:

Mission controllers sent commands to rotate the lander's main body, to which the solar panels are fixed. This may have exposed more panel area to sunlight.

But ESA's head of mission operations, Paolo Ferri, told the AP that, "We don't know if the charge will ever be high enough to operate the lander again."

Still, luckily, the scientists were able to download most of the lander's data before it went to sleep. And though Philae was supposed to keep sending home data for the next nine months, what the little craft has done already is inconceivably impressive, the result of 10 years of hard work. In fact, the awesome craft managed to achieve almost 100 percent of its primary goals. And as flight director Andrea Accomazzo told USA Today:

Words to remember —and not only if you're in the space industry. Images: Getty Images (3)

More like this
This Is When Netflix Is Going To Start Charging You For Sharing Passwords
By Darshita Goyal
6 Organizations Fighting Police Brutality That You Can Support Right Now
By Syeda Khaula Saad and JR Thorpe
Watch Jacinda Arden’s Devastatingly Honest Resignation Speech
By Sam Ramsden
How To Hide Cords Under A Desk
By Jenny White
Get Even More From Bustle — Sign Up For The Newsletter
From hair trends to relationship advice, our daily newsletter has everything you need to sound like a person who’s on TikTok, even if you aren’t.