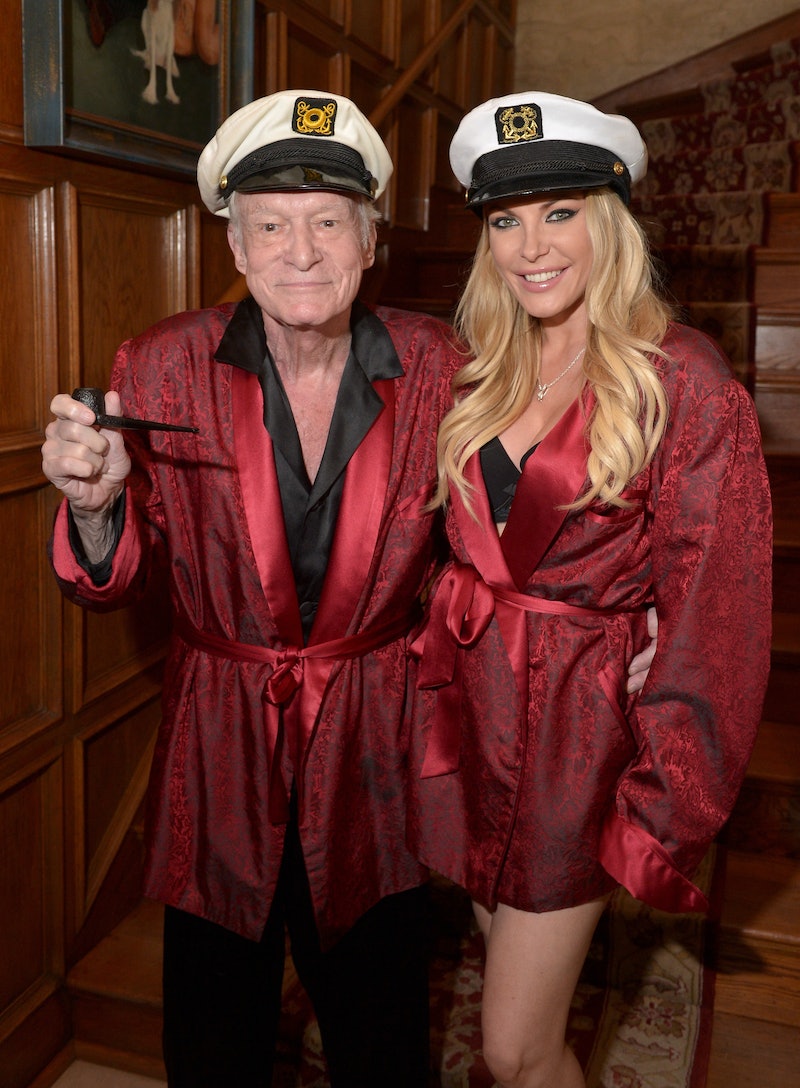 A confession from potentially the most boring sex writer of all time: I have never dated an older guy. I mean, OK, my current boyfriend is two years older, and at times that's seemed sort of significant. For example, it was weird to realize that his younger brother was my age, and when I was finishing up my undergrad degree, my dude was receiving his Master's. But in one's 20s, a two-year age gap does not really an older guy make, especially when you consider the 30- and 40-year-olds my friends have been seeing as of late. Get 'em, girls!

It's not like I'm talking about Paris Geller/Asher Flemming situations or anything like that. My friends' love interests aren't decrepit, but, yeah, they have some years on us. They're adults, they invest in things, and they can remember the Cold War. And, as you'd expect, they are (for the most part, at least) in considerably different places in their lives than the twentysomethings they're wining and dining.

As someone who has never been a part of one of these May/December romances (hey, I can't have experience in everything, guys) I was curious about what I was missing. I grilled a few of my friends about their way-cooler-sounding-than-mine relationships with people significantly their seniors (although no actual seniors, they'll have you note). If you've dated someone at least a decade older than you, the below list will probably sound pretty familiar. If you haven't, consider this your handy how-to.

1. They actually pick up the phone to make plans with you, and it's kind of weird.

2. Also, they think SnapChat is SO HILARIOUS.

In fact, it's a PERFECTLY NORMAL way to communicate, thx.

3. Instead, they'll send you photos via text, just like your mom does.

And you don't have the heart to tell them they're dating themselves in the process.

4. You can't get over how SECURE their life seems.

It's just because you're really mature for your age, right?

6. Actually, to be honest, you're probably developing a little bit of a maturity complex.

It's not ruining your day or anything, but it's true that you are much more conscious about how you're presenting yourself than you are with someone your own age.

7. In fact, you may get so used to asserting your maturity that you start to intimidate potential romantic interests who are your own age.

Out of habit, you're all, "THIS IS WHO I AM, AND THIS IS WHAT I WANT," and that loud crash you just heard is the sound of your hapless peer hitting the floor with a thud.

8. Anyway, not that you like to admit this, but sometimes you actually relish your role as the Hot Young Thing.

Proud of it? Not really. Self-satisfied? Maybe.

9. It's all very complicated.

10. That's why dating someone younger after dating an older dude or lady can be a huge relief.

You know how you regress like three years for a few weeks whenever you go through a breakup? It's like that, but on steroids.

11. But back to your current older fella or fille. Whose apartment is waaay nicer than yours, BTW.

Are those real Knoll Barcelona ottomans?

12. Oh, and that other woman who keeps calling? Just his real estate agent.

LITERALLY WHO EVEN BUYS HOUSES HONESTLY

13. Their friends are a touch wary about this whole you-guys-dating thing at first.

You get it, but it's still annoying.

14. And their family either thinks you're The One or the result of some weird one-third life crisis.

15. But you can let that go, because dude/lady can cook.

You yourself have never brined, but you're glad to see it's a skill that comes with age.

16. And when they're not cooking, they're taking you out to the best restaurants.

You're pretty pumped about it.

17. Sure, it's frustrating that your life priorities pretty much never align.

Suddenly, your vague thoughts about marriage and kids are potential deal breakers.

18. And there will be moments when you're stunned into feeling like a high-school freshman.

Like when he whips out a physical copy of his clean STD test results because, allegedly, "All older women demand these."

19. But, to be frank, you're also enjoying the most technically sound sex you've ever had.

So, altogether, things are going pretty well, you know?

More like this
23 Super Sweet Things To Write In A Valentine's Day Card
By Karen Belz and Lexi Inks
These 3 Signs Are Most Likely To Be In A Love Triangle — Here’s Why
By Kristine Fellizar
The 4 Zodiac Signs Most Likely To Chase You, According To An Astrologer
By Kristine Fellizar
Here’s What TikTok's "Mascara” Trend Is *Really* About
By El Hunt
Get Even More From Bustle — Sign Up For The Newsletter
From hair trends to relationship advice, our daily newsletter has everything you need to sound like a person who’s on TikTok, even if you aren’t.