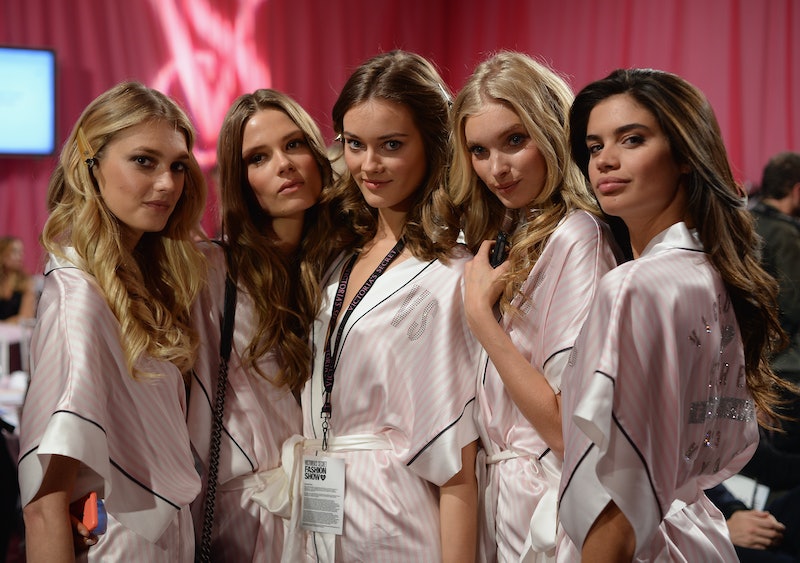 Though I thoroughly appreciate VS trying to make nice, the extremely short clip isn't great. It shows Sampaio discussing the importance of "knowing your own body type," which is probably supposed to be code for accepting yourself the way you are, before admiring fellow VS model Candice Swanepoel's bone structure. "If I put a picture of Candice and like I want to have that body. Not in a million years I'm gonna have that body because my bone structure is not built like her amazing..." End video. No, really.

Is Victoria's Secret for real with this? The motivation behind the clip is clearly to back peddle on the bad press they received from the "Perfect Body" by trying to Dove-ify their consumer outreach. But if actual body positivity is the goal, they have a looooong way to go. The video's caption reads "Don’t stress about what someone else has—love what u got!" but that isn't the message of the final product.

I personally think the blame for this video rests on the brand and not the model. In fact, Sampaio has proven to be quite a worthy spokesperson for body positivity, saying "Every body is different, and every metabolism is different! I eat a lot, so next time u decide to tell me to eat a burger remember I probably eat more burgers than you, I've always been skinnier, and probably will always be, I workout, I'm healthy and I'm happy!" She also fired back at Ryan's article critisizing the video with the following Facebook post.

I still think the video deserves to be criticized, but Sampaio herself is pretty awesome. Victoria's Secret wasted an opportunity to have her say something really meaningful, which she is obviously quite capable of, and instead chose to play it safe with a short clip lacking in actual substance.

More like this
The 12 Best Strapless Bras That Won’t Slip & Fall Down
By Audrey Williams and BDG Commerce
15 Talc-Free Makeup Brands For Safer Eyeshadows, Powders, & More
By Audrey Noble
The Beauty Industry Disrupter From Dallas
By Jordi Lippe-McGraw
Megan Rapinoe's Relaxation Hack Is Super Dreamy
By Carolyn Steber
Get Even More From Bustle — Sign Up For The Newsletter