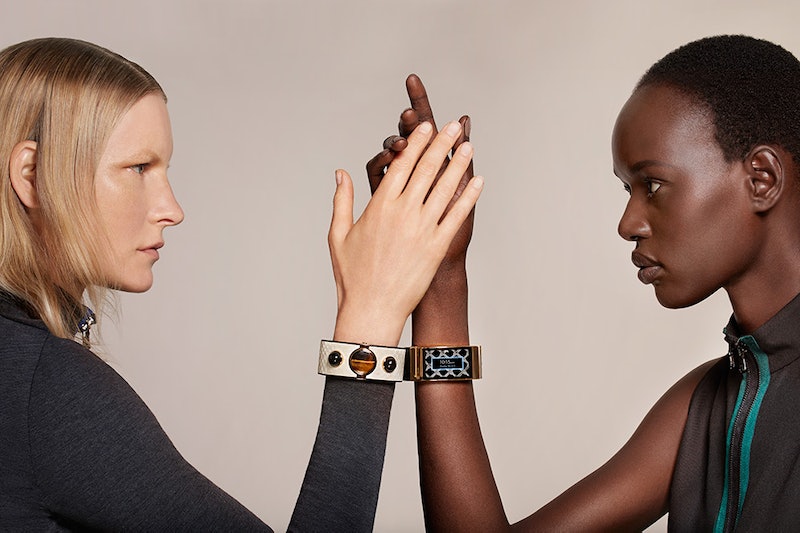 The fashion world is being inundated by wearable tech and geek-inspired pieces right now. It's a true convergence of form and function; these items are essentially fashionable and functional tech accessories that send messages and let you check Facebook. Remaining connected at all times is of critical importance in the digital, millennial age, so fashion and tech companies are working tirelessly to turn their gadgets into accessories that look as cool to wear as their internal functionality. Intel's MICA Bracelet, which functions much like a smart mobile device, will be available for sale this December and it's actually really, really nice-looking.

Designer Michael Kors has expanded in the wearable tech market, beyond iPhone cases, with actual chargers, while couture headphone partnerships, like that between Sass & Bide and Frends, are somewhat common and expected at this point.

What's so special about Intel Corp's MICA, which stands for "My Intelligent Communications Accessory," bracelet, which we heard rumblings about at the top of the year? The bracelet, which is going on sale in early December at select Barney's locations and Opening Ceremony stores, is infinitely cool and it does a lot. But does it do enough to set it apart from this increasingly crowded sector?

Here's all we know about the chip-making company's bracelet.

At $495, it ain't cheap. It is made of semiprecious gems, snakeskin, and gold, so the materials are costly and it will look good.

The bracelet's capabilities include text messaging, a calendar, and notifications from Facebook and other services, like Yelp. Okay, so how is this different from the at-hand smartphone? Honestly, it's not, other than how it looks and is worn. But the wearer/user will be able to create VIP contact lists so that only certain people can reach them through their bracelet. How very James Bond.

3. It Has Its Own Connection

It will have its own mobile connection, so it can exist independently of a smartphone and will come with two free years of data services from AT&T. So there's that.

4. It's Being Promoted As More Of An Accessory Than A Gadget

It's not being touted for its nerdiness but for its chicness. It's a standalone accessory. "We’re doing a jewelry piece for a woman; it happens to be smart," VP Ayse Ildeniz said, according to the Business of Fashion. "It's a departure in many different ways from what Intel usually does." Yeah, that's one way to put it! It's basically integrating a technology element into something that stylish and image-conscious women would already wear; it's not something women will seek out to wear or want to wear because of its tech-ness. The functionality seems like it's quite an added bonus for the very fashionable.

MICA's main competition is Apple's smartwatch, which is on deck for an early 2015 launch. Apple's version will also be promoted as an accessory more so than a gadget, and it will have different configurations. It can be basic bitch with a sporty, streamlined design or more snazzy like a bangle!

So what's the verdict on MICA and smart accessories, as a whole? Well, things could go either way. It will either be the bracelet of the tech-trendy or it could bomb, since iPhone users have have found many creative and cheap ways to personalize and bling-out their devices. Despite the tech nature of the accessory, it doesn't feel super groundbreaking as it has phone redundancies. But then again, it looks cool and hip, and that's the main goal of fashion, which doesn't always veer toward or prioritize function. If you want a cool-looking bangle, this is the way to go.

More like this
20 Smart Devices Under $35 That’ll Change The Entire Vibe Of Your Home
By Emma Carey
How To Turn Off Night Mode On Your iPhone Camera
By Emma Carey
Behind The Hilarity Of The "POV: You Walk Into My Room" TikTok Trend
By Lexi Inks
26 Ghost Story Podcasts To Get You Ready For Halloween
By Jessica Booth, Mia Mercado, JR Thorpe and Emma Carey
Get Even More From Bustle — Sign Up For The Newsletter