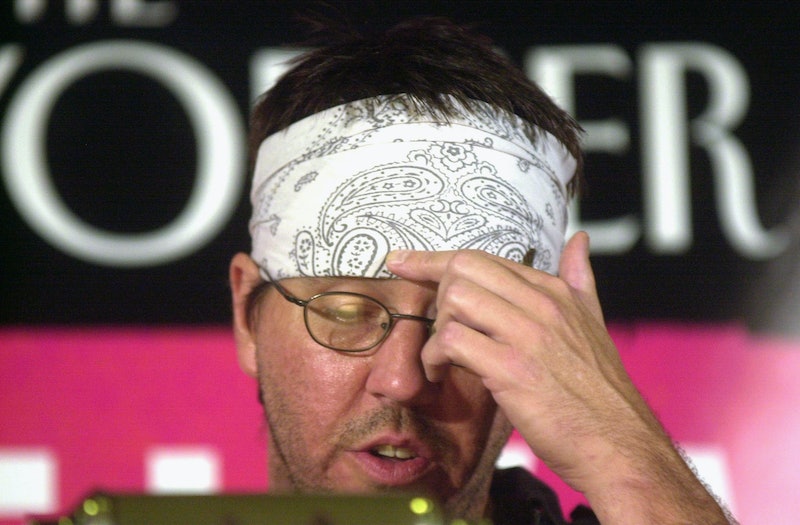 Once referred to as “one of the most influential and innovative writers of the last 20 years”, David Foster Wallace remains iconic amongst the major talents to be torn from the literary world far too soon. Revered and respected, Foster Wallace achieved a remarkable following during his too-short life. On the fifth anniversary of his death, we look back with excerpts from some of his most inspiring, humorous, and heartbreaking works.

From his first novel, The Broom of the System:

“There is no hatred in my love for you. Only a sadness I feel all the more strongly for my inability to explain or describe it.”

From Infinite Jest, arguably his masterpiece, and widely regarded as one of the great works of literature from the past two decades:

“Everybody is identical in their secret unspoken belief that way deep down they are different from everyone else.”

“I do things like get in a taxi and say, "The library, and step on it.”

From Brief Interviews with Hideous Men:

“In reality, genuine epiphanies are extremely rare. In contemporary adult life, maturation and acquiescence to reality are gradual processes, incremental and often imperceptible, not unlike the formation of renal calculus. Modern usage deploys epiphany as a metaphor. It is usually only in dramatic representations, religious iconography, and the ‘magical thinking’ of children that achievement of insight is compressed to a sudden blinding flash."

From what may be remembered as one of the best college commencement speeches ever, This is Water, delivered at Kenyon College in 2005 (listen to it in its entirety here):

“And the so-called real world will not discourage you from operating on your default settings, because the so-called real world of men and money and power hums merrily along in a pool of fear and anger and frustration and craving and worship of self. Our own present culture has harnessed these forces in ways that have yielded extraordinary wealth and comfort and personal freedom. The freedom all to be lords of our tiny skull-sized kingdoms, alone at the centre of all creation. This kind of freedom has much to recommend it. But of course there are all different kinds of freedom, and the kind that is most precious you will not hear much talk about much in the great outside world of wanting and achieving.... The really important kind of freedom involves attention and awareness and discipline, and being able truly to care about other people and to sacrifice for them over and over in myriad petty, unsexy ways every day.

That is real freedom. That is being educated, and understanding how to think. The alternative is unconsciousness, the default setting, the rat race, the constant gnawing sense of having had, and lost, some infinite thing.”

From his final novel, The Pale King:

“To be, in a word, unborable... It is the key to modern life. If you are immune to boredom, there is literally nothing you cannot accomplish”

“Hear this or not, as you will. Learn it now, or later — the world has time. Routine, repetition, tedium, monotony, ephemeracy, inconsequence, abstraction, disorder, boredom, angst, ennui — these are the true hero's enemies, and make no mistake, they are fearsome indeed. For they are real.”

“The entire ball game, in terms of both the exam and life, was what you gave attention to vs. what you willed yourself to not.”