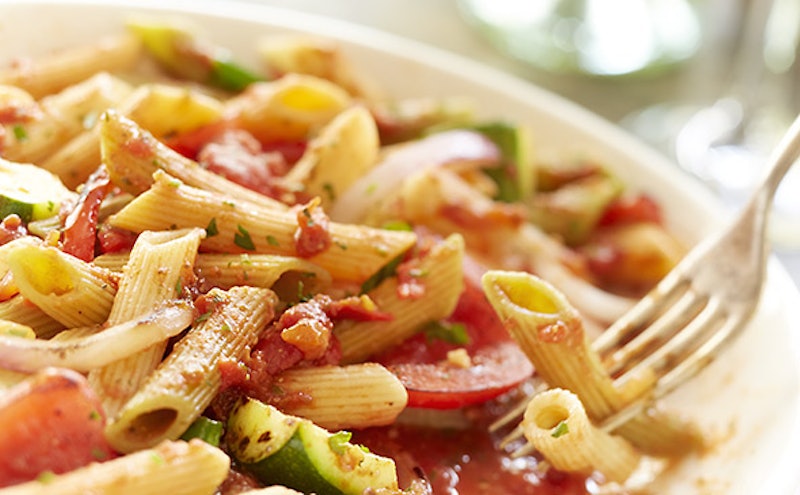 When the chance to enjoy unlimited pasta for seven weeks was presented to me, I immediately jumped because I am not an idiot. Back in September, Olive Garden launched 1,000 "Never Ending Pasta Passes," which would entitle the buyer to seven weeks of unfettered access to all the saucy fettuccine and penne you could eat for $100. The cards sold out quickly, because one can deny the comforting deliciousness of pasta, even when it comes from a less-than-desirable chain restaurant like Olive Garden.

I grew up pouring ketchup onto my spaghetti, so it’s not as if I’m expecting Mario Batali quality at Domino’s Pizza prices. Initially, I planned to only eat the unlimited pasta — the pass entitles you to bread, salad, and Coca-Cola soft drinks — but I was forced to expand my options after just a few weeks. After receiving my coveted $100 Unlimited Pasta Pass, I made plans to eat at Olive Garden as much as possible for as long as possible, blood sugar be damned.

Olive Garden is a bit of a drive from my apartment in Dallas, but I happily slogged down a congested highway during the lunch rush for this unique opportunity to clog my arteries with fettucine alfredo and artificial butter substitutes spread across those glorious, glorious breadsticks. After sitting in traffic for 20 minutes I was seated in my roomy booth for an afternoon alone with a neverending parade of pasta.

I started with the alfredo, a relatively safe choice. Or so I thought.

When my bowl arrived, I knew that this wasn't going to be good. The pasta had that still-hard look that insisted that it would be chewy, the sauce was gloopier than I remember, and I seriously doubt that there is even one ounce of real Parmesan cheese in that sauce. “Parmesan cheese product,” maybe, but there’s certainly none of that characteristic funk that actually gives alfredo sauce any freaking flavor.

I spent the first week of this seven-week love (hate) affair with Olive Garden being entirely decadent. I threw caution to the wind, and enjoyed every creamy pasta sauce on the menu three days in a row, sometimes with a little extra butter (that I requested from the kitchen) mixed in with my noodles. Occasionally, I would splurge on the premium mushroom alfredo sauce, but that proved to be unnecessary. No matter what ingredient it is, like roasted mushrooms, Olive Garden has this uncanny ability to extract every drop of flavor before they bring it to you.

I had five meals at Olive Garden in the first week, because I am an overachiever. I soon realized that the Olive Garden was probably playing a dirty trick on all of the schmucks who dropped $100 for unlimited pasta. Those “neverending” bowls of pasta rival the size of Jupiter, and I seriously doubt that anyone other than a professional offensive lineman could eat more than one bowl in a sitting. Unless you’re the guy that managed to eat $1,500 worth of food in those seven weeks, this probably wasn’t a good investment.

After a week of #treatyoself-style behavior, I thought that maybe I had just chosen the wrong dishes. Surely Olive Garden can do something right, otherwise how would they still be open and so full of people, always? The restaurant has “over 150” different combinations of pasta, sauce, and toppings, so I decided on my next visit to go for something a little lighter. Surely a plate of whole-wheat pasta, marinara, and grilled chicken couldn’t be as bad as that gut-bombing bowl of fettucine alfredo, but I soon realized exactly how naive that was.

The grilled chicken in my pasta was rubbery and weird, and somehow had the same consistency as the terribly gummy whole wheat pasta. Combined with the too-sweet marinara, I could practically feel my blood sugar rising to unhealthy levels. I was probably going to pass out in the middle of this Olive Garden. Because I am either incredibly dedicated or a masochist, though, I somehow managed to power through the disgusting textures and finish the bowl. Waste not, want not.

I quickly learned, though, to never order anything at Olive Garden that is topped with any kind of seafood. Shrimp are a relatively delicate kind of food, and don’t stand up well to hanging out in food wells for hours, waiting to be slopped on top of plates of pasta. Actually, you should probably just avoid the meat there altogether. That’s really sound advice.

Week Four and Beyond

By week four, I was eating the same meal over and over again, and really not even complaining about it. Maybe I had just resigned myself to the fact that I would be eating bowls of sticky pasta forever.

I had learned, though, that the best way to eat with my Pasta Pass was to avoid meat altogether, always ask for a ton of black pepper and grated parmesan, and never, under any circumstances consider ordering the whole-wheat linguini. That stuff is a special level of disgusting.

I did, however, continue my unending love affair with Olive Garden's salad dressing, which is clearly made beforehand because it is consistent and never smells like old refrigerator, something I can't always say for the rest of the menu.

Here's What I Learned

The worst part about this whole ordeal is that I kept coming back. When I didn’t really want to have to wear real pants to lunch or needed something decent and quick for dinner, that Pasta Pass was a great thing to have in my arsenal. No one was going to judge me if I put my elbows on the table, and I could Facebook through dinner without having to worry about looking like an antisocial asshole.

I rarely seemed to have the same server, probably because no waiter wants a lingerer who's eating "free" food and guzzling down all the Coca-Cola products they want. They likely don't tip well. I never made it through all 150 of those pasta options, but I’m confident that I could rattle of much of that menu by memory at this point.

Fortunately for those of us who don’t really want to dine alone, Olive Garden wasn’t terribly strict on the prospect of sharing bowls with friends. The Pasta Pass is intended for one person only, but I was able to surreptitiously share a few bowls with a friend as we split a few appetizers.

Still, after countless — okay, maybe 15 total, I only had 2-3 per week following that first disastrous week — disgusting bowls of gummy pasta and lackluster sauces, I think I might be good on Italian food for a long while. I suspect that, for years, I will associate even the finest bowls of pasta with cavatappi that is still hard around the twists and spaghetti that has been boiled into oblivion. After this experience, only a guy like Mario Batali could ever talk me into ordering a bowl of marinara and pasta again.

I have to say, though, the experience wasn't all bad. Those breadsticks are still incredibly dope, and that salad dressing may or may not have a crack-like substance that causes you to crave it at 3 A.M. Most Olive Garden servers that I encountered were impossibly nice, and generally let me take home breadsticks whenever I wanted. Most of all, though, there were veritable piles of those delicious chocolate Andes mints, and that may have made my journey with the Olive Garden Neverending Pasta Pass entirely worthwhile.

More like this
Dunkin’s Valentine’s Day Lineup Includes A Drink That Tastes Like Dessert
By Alexis Morillo
Pret & Costa’s Coffee Is The Strongest On The High Street, According To Which?
By Sam Ramsden
15 Black-Owned Liquor & Wine Brands To Add To Your Bar Cart
By Alexis Morillo
12 Aphrodisiac Desserts To Spice Up Your Valentine’s Day
By Kaitlyn Wylde
Get Even More From Bustle — Sign Up For The Newsletter
From hair trends to relationship advice, our daily newsletter has everything you need to sound like a person who’s on TikTok, even if you aren’t.