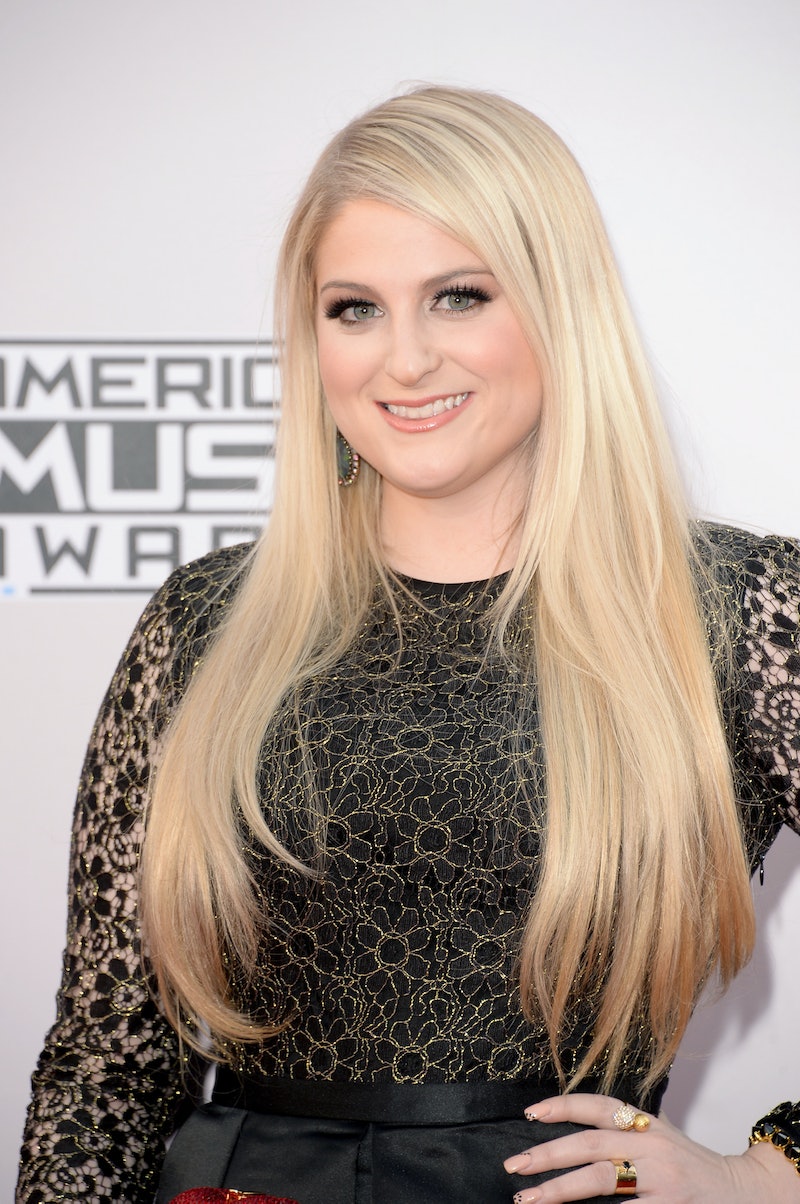 Meghan Trainor has been a bit iffy from day one. When "All About That Bass" was released back in July, the seemingly body-positive anthem sort of backfired by thin-shaming skinnier women to upsetting proportions. Whilst I totally applaud her for trying to write something meant to encourage women into self-love and confidence, the song definitely could've been better. Lots better. But even though Trainor doesn't consider herself a feminist, the desire she genuinely seems to have to show that all bodies are beautiful (a desire she failed to adequately convey in "All About That Bass") is definitely an important one. It's probably the reason she was nominated for "New Artist of the Year" at the AMAs, anyway. Say what you will about her politics or her feminism, she's doing something right -- and as proved her her red carpet ensemble, she's definitely doing fashion right (not that there's a set way, or anything).

After her new video, "Lips Are Moving" was released, I couldn't help but feel a twinge of excitement about what she'd wear on the red carpet of the AMAs (not to mention during her performance). Her "Lips Are Moving" fashion was just so fun. There was Lolita. There was vintage. There were a lot of sequins (the same cat sequins Katy Perry wore, in fact). There were glimmering Betsey Johnson pumps. And her gorgeous Ted Baker dress tonight is pretty much all of these things, too (minus the sequins). Trainor described the ensemble as "classy and comfortable" but it's also fun and cute and young. It's just the perfect combination of youth and feminine elegance, not to mention playful, sweet and a little sassy.

Even though there's been a lot of commentary on how Meghan Trainor's "All About That Bass" doesn't even make sense, considering she's just a normal-sized women, Trainor's body is, realistically, curvier than the average Hollywood norm. So showing pride in that body -- and not being scared of being seen -- is definitely a win in my book. Plus, she brought her brothers to the AMAs as her dates, which is basically the cutest thing ever. And just look at that glistening lip clutch! She had to have some sparkle, after all.