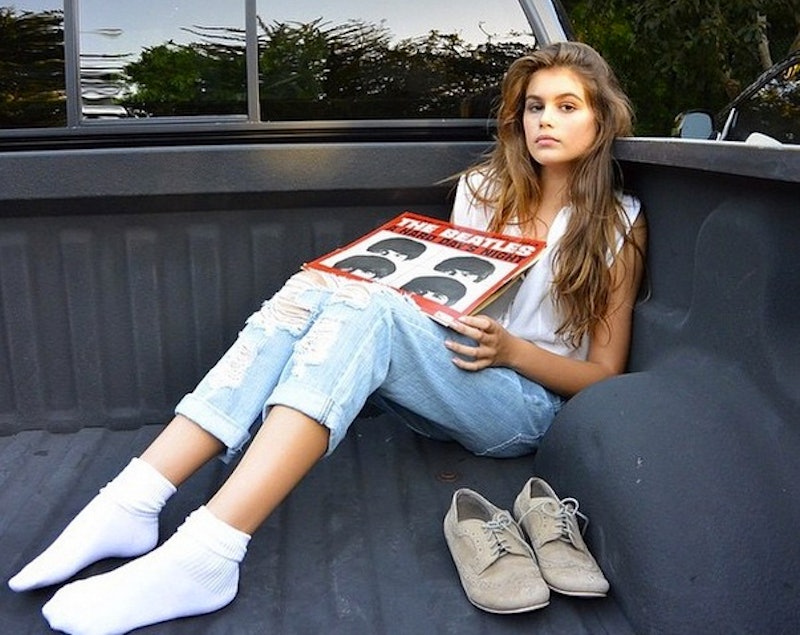 I don't know about you, but I had bad hair when I was a preteen. Like, real bad. From the ages of 10 to 14, my hair was either matted, fuzzy, greasy, or all of the above. Not cute. Obviously, though, Cindy Crawford's daughter has no such problems — in her first editorial shoot for Teen Vogue, it's obvious that Kaia Gerber has pretty incredible genes, especially when it comes to her locks.

Of course, the supermodel's daughter has the face of, well, a supermodel. She's stunningly gorgeous, just like her mom. But it's her hair that really stands out. Gerber has some perfectly tousled boho waves going on, and that's not a look you can just get at your local salon. Her light brown hair color (and lots of it, might I add) is the perfect match for her golden skin, only adding to her striking beauty.

Basically, I've come down with a serious case of jealousy. I'm convinced I would have enjoyed my tween years (which, in hindsight I consider 10 to 14, because I feel like you're not really a teenager till age 15) much more if I'd had her her hair — in fact, I'm convinced I would enjoy my life now more if I had her hair. Good hair solves all problems, right? Here are 8 tweens (including Mini Cindy) that have envy-inducing hair.

When you put a picture from 13-year-old Kaia's Teen Vogue shoot next to a snap of supermodel mom Cindy Crawford, it's obvious how #blessed that gene pool is. Another photo, because just one doesn't do Kaia's hair justice:

Speaking of editorials, Dance Moms star Maddie Ziegler appeared in a shoot for ELLE.com this week in which her sleek, long hair and middle-part shined — very '70s chic.

You might recognize Mackenzie as Renesmee Cullen from the final Twilight film. She most recently appeared alongside Matthew McConaughey in Interstellar, and I have a feeling we'll be seeing her and her beautiful hair a lot more soon.

One of the best parts of watching The Real Housewives of New Jersey? Looking at Teresa's 13-year-old daughter Gia's gorgeous hair (and watching "Tre" flip tables.)

Lucky for us, we'll be seeing a full two hours of 11-year-old Quvenzhané's awesome hair when Annie comes out in mid-December.

So I may only know about Addison because I watch a lot of Nick @ Nite and the 10-year-old's show The Thundermans is promo'd quite a bit, but I can appreciate good hair when I see it.

J Law's 14-year-old onscreen sister has some of the most beautiful blonde hair I've ever seen. The envy is real right now.