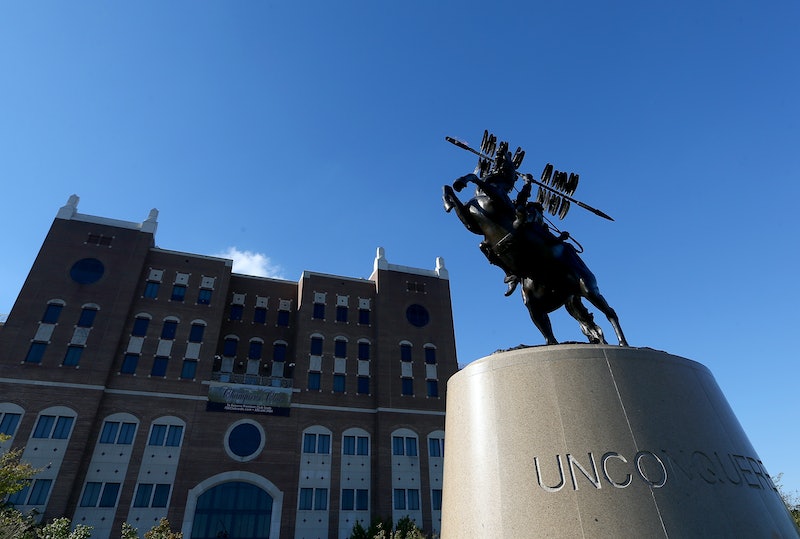 Another American campus was rocked by violence early Thursday, after a shooting at Florida State University's Strozier Library left the gunman dead, three people wounded, and FSU's student population in shock. Though details about the tragedy remain murky, officials are sure that this was an "isolated incident" and that the campus is under no further threat.

Here's what we know so far: According to a statement by the Tallahassee Police Department, at roughly 12:30 a.m., police got a call about an "armed subject" at FSU's Strozier Library, where roughly 400 students were sitting and studying for exams. Shots were reportedly fired inside the building, more were fired outside. As graduate student Alexandra Lauren, who was at the library at the time of the shooting, described to CNN:

We heard the gunshots, and then it was in a matter of seconds the entire first floor just seemed to go into chaos. It was very scary. I'm just more heartbroken than anything else. FSU means a lot to me.

By the time the officers reached the attacker — standing with his gun, at the entrance to the library — they'd already heard word someone had been wounded. The officers ordered him to drop his weapon, but he didn't, instead opening fire on the policemen, who fired back, killing him. Said Tallahassee police spokesman Dave Northway to NBC News:

The suspect did not comply with the commands and shot at the officers. They returned fire and the suspect was killed.

By 2:41 a.m., the university issued a statement on SFU's Facebook page declaring the area secured. Just over an hour later, at roughly 4 a.m., an intercom announcement across the campus assured students all was clear. According to the AP, two of those injured are now being treated at Tallahassee Memorial Hospital, one of whom is in critical condition.

Over the past few hours, I have received several briefings from administrators and law enforcement regarding campus safety and security, and they have established that this was an isolated incident. Florida State University and Tallahassee police departments have done an extraordinary job taking quick and decisive action to prevent further tragedy, to secure the scene and to keep campus safe. They have assured me that there is no further threat.

As is often the case with these types of incidents, not much is known about the shooter. It's not clear whether he was a student at the university, or a local resident, or even a U.S. citizen — just that he was male and, obviously, armed. As Police Chief Michael DeLeo said to CNN:

Obviously everyone wants to know why. That's the hard answer we're going to continue to investigate.