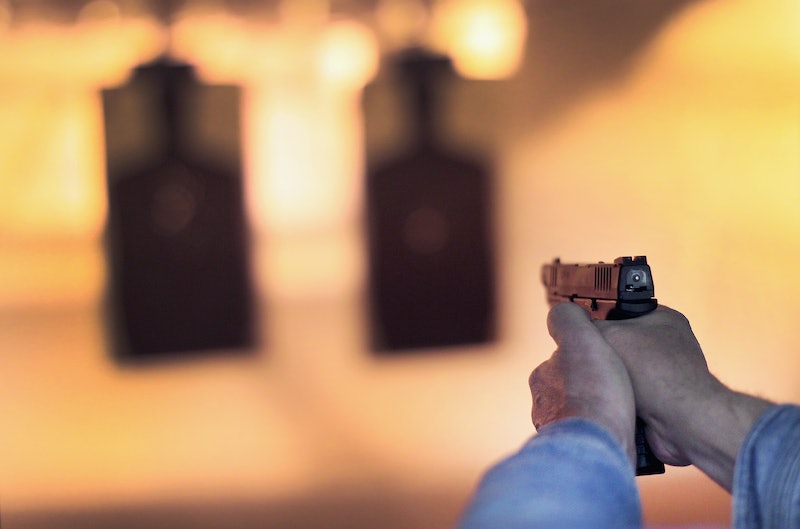 It's been ten years since it was legal to make a man stand while government employees shot him down, but now, the firing squad may be making a comeback in Utah: On Wednesday, legislators backed Republican Rep. Paul Ray's proposal — allowing the use of firing squads should the drugs necessary for lethal injection be unavailable (which, as it stands, they are) — 9-2, the first step in the bill's journey to the 2015 Utah Legislative General Session in January.

The last year has seen tragically botched execution after tragically botched execution, reigniting a national debate around the role of capital punishment. Thanks to a scarcity of the drugs needed for lethal drug cocktails — European manufacturers refuse to sell drugs to the U.S. they know will be used for capital punishment — it's becoming harder and harder for the U.S. to impose the death penalty without it becoming torture. Utah in particular is struggling with getting the right combination of lethal drug s— which is where the firing squad proposal comes in. According to Ray, who spoke to the Salt Lake Tribune:

The European company that makes this [drug cocktail] is refusing to sell to the United States because they’re opposed to the death penalty. [The firing squad is] absolutely one of the most humane ways to execute someone because it’s so quick and, quite honestly, one of the most painless ways.I’m sure there’s some initial pain to it.but you don’t see the struggling and the trying to breathe you see on any type of lethal injection. Even on the ones that are the lethal drug cocktail, you still see the gurgling and the fighting to breathe.

Ray isn't the first legislator to propose bringing back the firing squad; lawmakers in Missouri and Wyoming have also tried to pass similar bills recently, though both measures have stalled in the state legislatures. Even U.S. Judge Alex Kozinski, chief justice of the Ninth Circuit, has made it clear he thinks a firing squad is the most "promising" method of capital punishment.

Ray's bill, which goes to the 2015 Utah Legislative General Session in two months' time, would require a judge to decide whether a drug cocktail was legal and available; if no drug combination is available, the convict would be executed by firing squad. Said Ray:

We have to have an option. If we go hanging, if we go to the guillotine, or we go to the firing squad, electric chair, you're still going to have the same circus atmosphere behind it. So is it really going to matter?

It's unclear whether the firing squad would really be more — or less — humane than lethal injection, which has seen 32 botched executions since the '80s. If done properly, death by firing squad should be instantaneous. If the shooters miss, though, the death can be both brutal and prolonged. As Anna Chadwick, of the rights group Reprieve, explains:

The idea of someone being executed by firing squad in the modern age is very disturbing. However it would be a mistake to assume that, up close, death by lethal injection is any less so.

What it really comes down, it seems, is this: when it comes to state-endorsed killing, "humane" is a pretty flexible concept. Images: Getty Images (3)

More like this
6 Organizations Fighting Police Brutality That You Can Support Right Now
By Syeda Khaula Saad and JR Thorpe
Watch Jacinda Arden’s Devastatingly Honest Resignation Speech
By Sam Ramsden
Eurovision Has Been Given A Whole New Look Ahead Of Its Liverpool Debut
By Bustle UK
This Is When Netflix Is Going To Start Charging You For Sharing Passwords
By Darshita Goyal
Get Even More From Bustle — Sign Up For The Newsletter
From hair trends to relationship advice, our daily newsletter has everything you need to sound like a person who’s on TikTok, even if you aren’t.