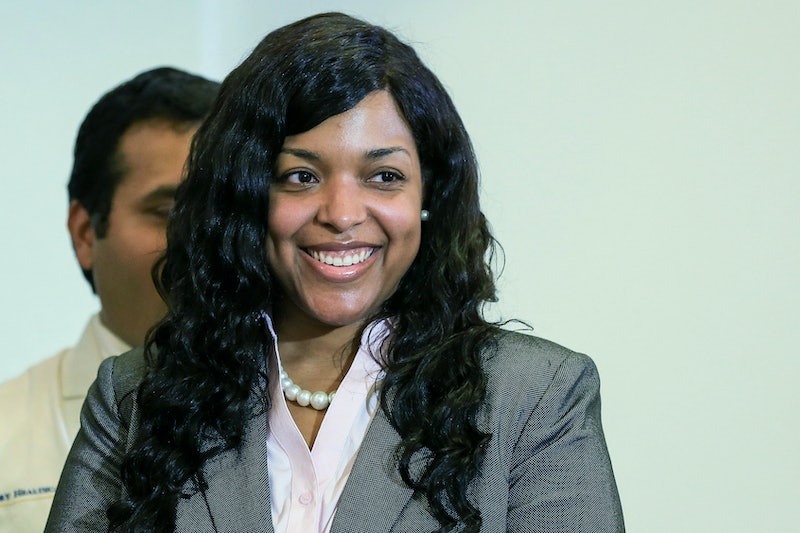 There's no doubt contracting — and recovering from — a deadly virus puts things into perspective a little. The little things (that slow barista at your favorite coffee shop, the fact that your work shoes give you blisters) stop mattering, and you're suddenly filled with benevolence for the world. Still, when Ebola nurse Amber Vinson lost her engagement ring thanks to some Hazmat teams' (too) diligent cleanup, it's kind of heartbreaking. I mean, that's one bad month. Amazingly, the good people of Zales felt the same way: Vinson is getting a free engagement ring, any one she'd like.

Vinson has had one hell of a roller coaster ride over the last six weeks. After treating the U.S. first Ebola patient, Thomas Eric Duncan — who later passed away — Vinson faced a tsunami of public criticism for boarding a plane to Cleveland, and then tested positive for Ebola on Oct.14. She then spent two weeks at Emory University' hospital, finally testing negative for the virus at the end of the month. When she got home, though, she discovered that the decontamination team had destroyed all of her jewelry — including her engagement ring.

Said Vinson at the time to the Associated Press:

I took off all my jewelry, thinking that my jewelry would be safer at home than in the hospital. And when the decontamination team came in, everything that was on the surface was swiped into a bin for incineration. My jewelry box being on my nightstand was one of those things that got destroyed.

"I was crushed. It's a thing, but it has sentimental value to me," she later said to Don Lemon of CNN Tonight.

Though this happened back when the virus had first made its way to the U.S. — and officials were therefore understandably over-zealous in their efforts to curb Ebola's spread —burning all of Vinson's jewelry was a bit extreme, especially considering it would been just as effective to just wipe the items down with bleach. Making the situation all the more tragic. (Seriously, losing your health, your privacy, and your jewelry, all in less than a month?)

Luckily for Vinson, though, Zales jewelers apparently empathized with her situation. This week, they offered the nurse her choice of rings, free of charge. Said Chris Nieto of Zales jewelers:

When we heard that Amber Vinson's ring was lost by the clean-up crew, our hearts went out to her. It was really important that we went ahead and wanted to step up to get her something that helps celebrate her life and express love.

Although of course this is great publicity for Zales, I'm choosing to believe the store did it out of the kindness of their hearts, to show us all that the world isn't always disease and sadness, sometimes, it's marshmallows, rainbows and yes, free bling.