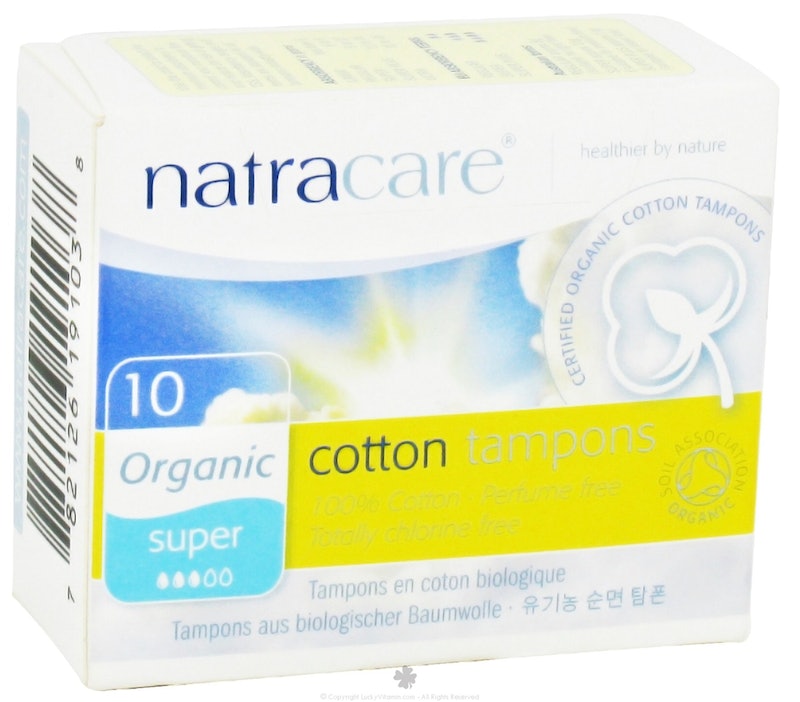 If you take the time to look into how a tampon is made, it can actually start to seem crazy that we don't all buy organic tampons. In theory, a tampon seems harmless enough — it's just a small chunk of cotton that is placed inside the vagina to absorb blood when a woman is menstruating, right? What we don't tend to think about is where that cotton is coming from, and what chemicals and pesticides have been used to keep it from being devoured by insects while it’s still in the fields. Once you take into consideration that most tampons are wrought with all those pesticides and chemicals, and that you're putting them into your body for hours at a time, suddenly, that 10 to 20 percent more that organic tampons cost definitely seems worth it.

In addition to the billion tons (yes, billion) of pesticides and herbicides sprayed on cotton crops — some of which can cause cancer, mess with the nervous system, and even interfere with hormone production — the majority of cotton crops are also genetically-engineered, which, according to the Institute for Science in Society, could lead to more bacteria that is antibiotic-resistant. Oh, and I haven’t even mentioned the bleaching of the cotton that, although chlorine-free as of the mid-1990s, is done to each and every one of those non-organic tampons. Now think about the fact that, on average, a woman will use more than 11,5000 tampons in her life. Yikes.

When it comes to buying organic, we may think mostly about food products, but there is so much more to it than that. Here are eight other household and beauty items that you should really choose to buy the organic, chemical-free versions of.

Some mattresses made before 2005 may have been treated with chemicals called polybrominated diphenyl ethers to protect the mattresses in case of a fire. However, those chemicals have been linked to issues with memory and learning, as well as respiratory problems. Considering how seldom people buy new mattresses (I just finally got a new one for the first time in 15 years), it might be time to upgrade to an organic mattress that’s free of those nasty PBDEs. (Since, if you think about it, you're breathing it in every night.)

Choosing BPA-free plastic bottles is always a good idea, since according to the National Institute of Environmental Health Sciences, BPA not only negatively affect the body’s endocrines, but can also lead to breast cancer in women. What's an even better idea? Going one step further and investing in organic water bottles. An organic water bottle isn't just BPA-free, but free of phthalates and all other toxins as well. Both reusable glass water bottles and unlined stainless steel water bottles are great, because there's no need to worry about leaching of chemicals into your drink.

If you’re going to buy organic food, it would make sense that you kept your cookware free of chemicals, too. While a non-stick pan may make for a perfect omelet and less of a mess afterward, what it can possibly do to your insides isn’t so great.

That non-stick material on pans contains a fluorochemical that, when overheated, creates a toxic fume that “can coast the inside of the lungs and cause allergy-like symptoms,” explains Olga Naidenko, a scientist at Environmental Working Group. But what constitutes “overheating?” Oh, just two to five minutes of regular use on a stovetop is enough to make your pan or pot a collection of toxicity. You can't go wrong with gold old-fashioned cast iron.

Similar to water bottles, the majority of plastics used in food storage containers are chockfull of BPA, which, in this case, can literally seep into all those yummy leftovers. Suddenly, those organic leftovers aren’t so organic anymore, and if you choose to heat those leftovers in those plastic containers, it’s like if you just made a BPA gravy and smothered your food in it.

Your best bet in this case are glass containers. Not only are they BPA-free, but they're also awesome for the environment. And who doesn't love the look of a Mason jar full of food?

Most toothpastes contain sodium lauryl sulfate, which can damage oral tissues, causes canker sores, and eventually even lead to taste disorders. Such damage actually makes the lining of your mouth shed, which can lead to the dreaded halitosis (bad breath). Choosing to go organic with your toothpaste is the first step in getting your mouth back on track and functioning properly again.

Most deodorant contains aluminum, which has been linked to Alzheimer's, as well as to an increased risk of kidney disease, breast cancer, and even seizures. No one is suggesting you run around without using some form of deodorant, but choosing one that is void of aluminum and synthetic fragrances will make for a happier and healthier body.

Many skincare products contain parabens, which have caused reproductive issues in lab rats — no thanks. Considering our skin absorbs over 80 percent of what we put on it, it's hard not to give yourself at least one reason why you should not go organic with your health and beauty products, stat.

Now that we know how much of what we put on our skin is absorbed into the body, it's time to think about soaps. The majority of soaps contain petrochemicals and synthetics, which are not only irritants on the skin (really drying!), but are bad for our insides, too. In choosing organic soaps, you're not just doing your epidermis a favor, but our environment, too. Another plus? An organic soap is less likely to be tested on our furry friends.

More like this
This Week’s New Makeup Releases & More Beauty Headlines
By Audrey Noble and Erin Stovall
Your Guide To Treating Hyperpigmentation, Straight From The Pros
By Shani Hillian
Here's How Lip Oil Compares To Balms & Glosses
By Paris Giles
The Body Shop’s New Range Has More Antioxidants Than Retinol
By Justine Knight
Get Even More From Bustle — Sign Up For The Newsletter