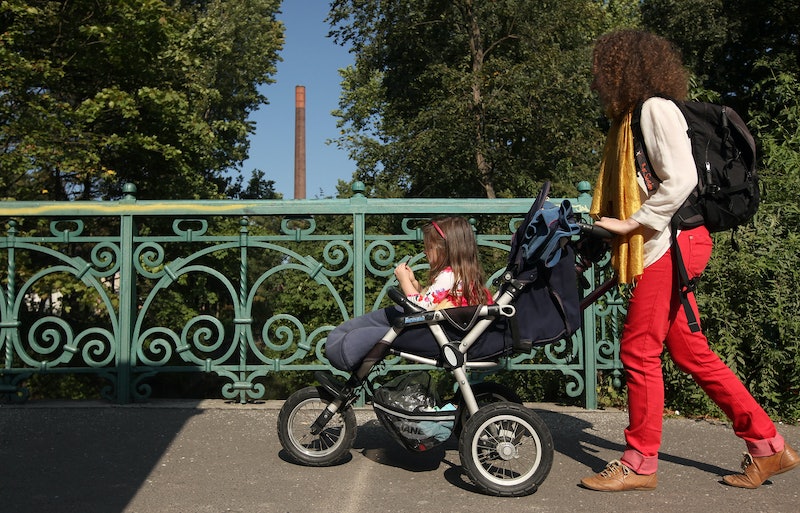 I'll admit it: becoming a mother scares me. The non-stop energy, the incessant demands, the inconceivably large responsibility. But now, it turns out I have one more thing to be afraid of, too: This week, millions of Graco baby strollers were recalled due to a “fingertip amputation" hazard — meaning, yah, there's a risk of your/your offsprings' fingers being chopped off as you go out for a casual stroll in the park. Shudder.

You can have bought these innocuous strollers at any time over the last 14 years, from trusted outlets like Target, Toys R Us, Walmart and Amazon, for roughly $40 to $70. Little did you know what you were getting into: the issue, it seems, is with the old style of hinge, which can — in certain, "rare" instances — trap the finger and either just cut it, or cut it off completely. After getting 11 injury reports (including both "full and partial fingertip amputations"), Graco decided to do a voluntary recall, of a whopping 5 million strollers.

In the meantime, Graco urged people to use extreme caution when using the terrifying-sounding strollers, writing on its website:

Over the past 60 years, safety has been and will continue to be the priority at Graco. As part of our continuous effort to provide quality and safe products, Graco identified that select stroller models, including some of our LiteRider models that were sold before the updated hinge was available, have folding hinges that could in rare circumstances have the potential to pinch a child’s finger, posing a laceration or amputation hazard.

While waiting for a repair kit, caregivers should exercise extreme care when unfolding the stroller to be certain that the hinges are firmly locked before placing a child in the stroller. Caregivers are advised to immediately remove the child from a stroller that begins to fold to keep their fingers from the side hinge area.

Just this last January, the company Britax recalled over 210,000 strollers because of the risk of finger amputation or breakage. In 2009, about a million Maclaren strollers were recalled from Target and Babies "R" Us after 12 children had their fingertips lobbed off due to the strollers' hinge mechanism.

In 2012, two companies — Kolcraft and Peg Perego USA Inc — both announced large-scale recalls of their products; though the latter wasn't due to amputation hazards, it was because of the risk of strangulation and entrapment. Really, one kid actually died after being strangled by a Peg Perego stroller and another nearly did.

My question: How is it we can have vaginas that smell like peaches, gloves that make us Spiderman, and levitating trains, but we can't make a friggin' pram that doesn't co-function as a baby-finger-clipper?

More like this
The 4 Best Lip Balms To Prevent Cold Sores, According To A Dermatologist
By Maria Cassano
The 5 Best Insoles For Overpronation & Flat Feet, According To Experts
By Jenny White
The 8 Best Crystals For Meditation, According To A Healing Energy Practitioner & Meditation Teacher
By Lauren Moison
9 TRX Exercises For Beginners, Straight From Trainers
By Carolyn Steber
Get Even More From Bustle — Sign Up For The Newsletter
From hair trends to relationship advice, our daily newsletter has everything you need to sound like a person who’s on TikTok, even if you aren’t.