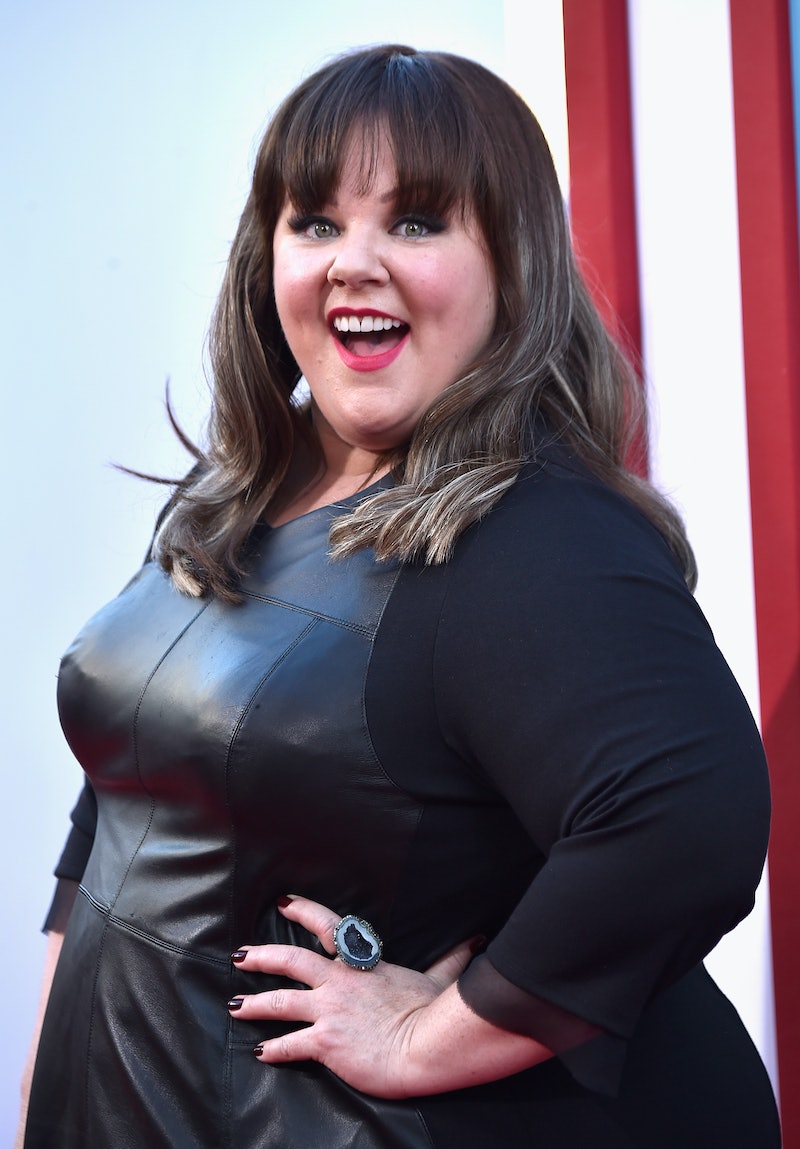 Let me preface this by saying that I fully support people making proactive decisions relevant to their happiness or states of psychological, emotional, and physical health. While I am a big proponent of fat pride, size acceptance, health and every size, and body positivity, I'm also aware that a lot of women (and men) are unhappy at a higher weight. Even though I believe this is a result of society's brainwashing most of the time, and of the taught behavior that is fat shaming, I don't believe in attacking the problem via thin shaming, or making a woman feel badly about her desire to lose weight. It's a social pressure I've been through. I get it. All that being said, Melissa McCarthy's 45-pound weight loss has made me sad. But not for the reasons you might expect.

By this point, it's no secret that she's lost a few sizes. Last Sunday, McCarthy appeared at P.S. Arts's Express Yourself event wearing a pretty amazing ASOS Curve bomber, but having undergone some rather incredible changes herself. This would not have come as such a shock, perhaps, had McCarthy not become one of our favorite size-acceptance champions in recent years. "I've never felt like I needed to change," is one of her most memorable quotes to date. Not to mention her observation that when people call her "America's plus-size sweetheart," she thinks, "It’s like I’m managing to achieve all this success in spite of my affliction... Would you ever put that in the headline for a male star?" And let's not forget that McCarthy and Rebel Wilson reportedly made a pact (in a magical moment for chub-love solidarity) not to lose weight. Last winter, a source told Radaronline, "Neither one of them is trying to lose weight and they’ve formed this little support group to keep each other from falling into the skinny Hollywood trap."

People change. People's minds change. People say things they don't mean constantly. But what's so distressing (and disheartening) about this whole issue is not that McCarthy has lost weight — that is her choice, and she has the right to control her body. Rather, it's the public's response to that weight loss. It's the reminder that traditional, linear, thin-centric constructs of beauty and femininity are alive and well. And not just in Hollywood, but almost everywhere else, too.

Time and time again, a celebrity loses weight and we applaud them. It doesn't matter whether they have been crash dieting, starving themselves and developing real health problems (as opposed to the so often exaggerated, "You're 40-pounds overweight, so you must have Diabetes," kind of problems). We still tell them they look better than ever. We bring out the, "You go girls," and the, "Well done, yous."

Let's reflect on Kesha for just a second. So many people admire(d) the singer's slender, boyish frame, for instance. And then it was revealed she had an eating disorder — the same life-threatening illness that has permeated the lives of countless other celebrities, and women everywhere, for decades on end. The same illness that affects 20 million women and 10 million men in America every year, as reported by the National Eating Disorders Association. But what if Kesha got fat (cue audible gasps)? What if she showed up at this weekend's AMAs as a size 20 rather than a 2? What would that coverage be like?

I'm not at all saying McCarthy is destined to end up with an E.D. It's not something I wish upon anyone, let alone the woman who brought us Sookie St. James. It seems that her weight loss thus far has been achieved by a high-protein, low-carb diet. And sources say she's not looking to be thin, but simply "a happy medium." If she's going to be losing weight, well, thank the heavens she's doing it healthily rather than via starvation. But why is the commentary so damn congratulatory? It's basically been a sea of:

"Yay! One more beautiful, healthy, successful, brilliant star has succumbed to our society's impossible weight standards." And then, "Yay! She couldn't have possibly looked better before because she was fat!" And let's not forget, "She was so unhealthy before. Now she's the picture of good health and fitness!"

The idea that a man or woman could be beautiful and sexy and jaw-droppingly awesome at over 200-pounds remains perplexing to our close-minded universe, it would seem. Health aside (because we know how people feel about the "obesity epidemic" and our doomed, chubby children), people still can't wrap their heads around the idea that weight loss doesn't always equate to happiness, self-love or, yes, HEALTH. Thus why 90 percent of the McCarthy coverage has insinuated that there was something wrong with her before. And that now, she's on the road to recovery.

Contrary to what this Thought Catalog article (and many other uniformed humans) may try to tell you, America is not accepting of fat. We have a lot of fat people, sure. But does that mean we don't fat shame? Does that mean we don't shove the diet industry down the throats of everyone and their mother? Why so many eating disorders, then?

I don't know how many times the reality that more fat people does not equate to more acceptance needs to be reiterated. What I do know is that McCarthy — who I will always love, respect and admire regardless of what size she is, or wants to be — feels, to me, like another casualty. Another woman to be sucked into the grim vortex of, "Thin Equals Happy." I will always hope that she is happy. But from my experiences — from the experiences of those around me — it's not difficult to see that this vortex is a miserable place to live in. A vicious circle and a never-ending battle. Perhaps if we, as a species, just realized that beauty, intelligence, health, success and self-love can be achieved outside of the vortex, the world would be a far better place.

Before was smiley. Before was beautiful. Before was perfect. After is lovely, too — don't get me wrong. But it simply does not mean that McCarthy was anything less than glorious pre-weight loss.

More like this
The 12 Best Strapless Bras That Won’t Slip & Fall Down
By Audrey Williams and BDG Commerce
15 Talc-Free Makeup Brands For Safer Eyeshadows, Powders, & More
By Audrey Noble
The Beauty Industry Disrupter From Dallas
By Jordi Lippe-McGraw
Help! I'm Not Getting Any Attention On Dating Apps. What Can I Do?
By Sophia Benoit
Get Even More From Bustle — Sign Up For The Newsletter