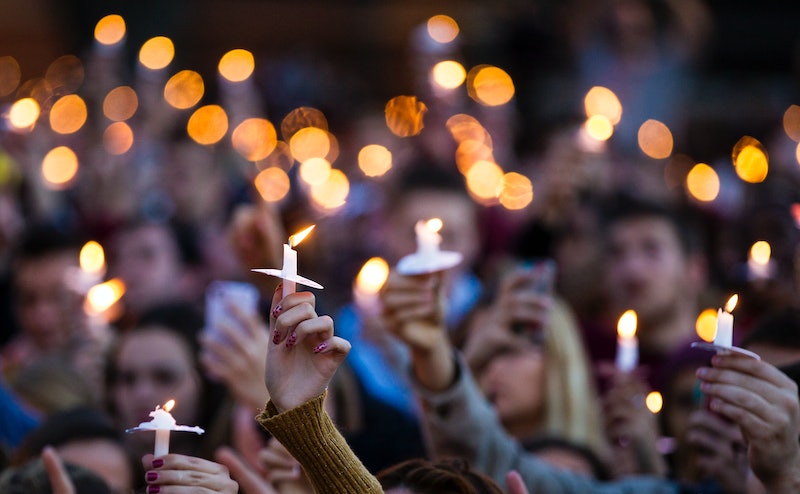 On Thursday morning, another American campus was rocked by tragedy when a gunman opened fire at Florida State University's Strozier library, injuring three and entering into a fatal shootout with police. While we don't know much about why the FSU shooter, Myron May, attacked his alumni, one thing is becoming clear: He was deeply paranoid, even mentally unstable. And the police knew about it.

Here's how it went down: At roughly 12:30 a.m. Thursday morning, May walked up to FSU's Strozier library armed with a .380 semi-automatic handgun and several rounds of extra ammo in his pocket. There, he opened fire on the students standing outside, and then walked into the front lobby, where he shot a library employee. He never made it past the security gates, though, and was eventually confronted by FSU Police, as well as the Tallahassee Police officers. The gunman and the officers exchanged gunfire, and May was eventually killed by the officer's bullets. Thirty rounds were fired in total.

From what we know, the attack seems random. Though May attended FSU in 2001, he graduated from there in 2005, and then went on to study at Texas Tech Law School. Since 2009, he's been a practicing attorney in Texas and New Mexico, only resigning from his job a few weeks ago. So he wasn't a student or an employee of the university, and had only recently moved back to Tallahassee. Why he chose to attack the Strozier library, then, remains a mystery.

But he was troubled. According to documents obtained by the Tampa Bay Times, May had been struggling with increasing paranoia over the last few months. Two police reports from Las Cruces, New Mexico, as recently as this fall make it clear that May believed he was being watched — even targeted. A police report from September reads:

Over the past two weeks he was almost certain that there was [a] camera somewhere located in the interior of his residence. He believes he was being watched and observed. He stated that he can constantly hear voices coming through the walls specifically talking about actions he was doing.

At one point, May told a police officer that he heard voices even when he got out of a bath and put on moisturizer: "He specifically stated he heard voices say, 'Did you see that? He never puts lotion on.'" He once showed up at his girlfriend's house, terrified, holding what seemed like a part of his car, claiming it was a surveillance camera. That night, she called the police, who promised to make a "welfare check," but it never happened — by the time they knocked on May's door, he'd already left.

And that's not all. According to a diary he kept, May wanted to bring attention to this surveillance. Said Tallahassee Police Chief Michael DeLeo in a statement:

Mr. May had a written journal, and videos, where he expressed fears of being targeted, and he wanted to bring attention to this issue, of targeting, A preliminary review of these documents and videos demonstrate that Mr. May was in a state of crisis.

Mr. May's sense of being and place in our community was not what most people would refer to as a normal. He had a sense of crisis and he was searching for something."

As it stands, no one but May himself has died as a result of the shooting, and though three others were shot, only one of them remains in critical condition. But this isn't the first time someone with severe mental health issues has slipped under the radar, in spite of being flagged — next time, though, the losses may be far greater.Images: Getty Images (3)

More like this
A New Netflix Doc Will Explore The Unsolved Murder Of Jill Dando
By Sam Ramsden
This First Look At 'The Gold' Shows Jack Lowden In A Whole New Light
By El Hunt and Sam Ramsden
6 Organizations Fighting Police Brutality That You Can Support Right Now
By Syeda Khaula Saad and JR Thorpe
This Is When Netflix Is Going To Start Charging You For Sharing Passwords
By Darshita Goyal
Get Even More From Bustle — Sign Up For The Newsletter
From hair trends to relationship advice, our daily newsletter has everything you need to sound like a person who’s on TikTok, even if you aren’t.