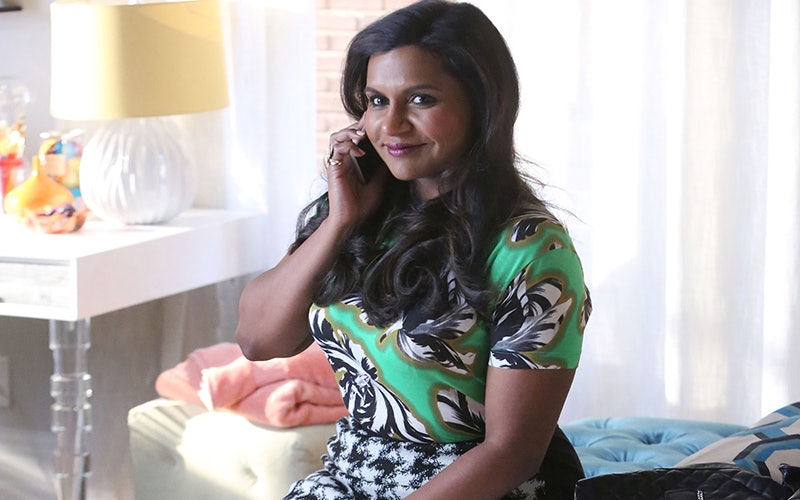 You may recognize his work from such blockbusters as Titanic, the aca-tastic hit Pitch Perfect, and small-screen hits like Castle and Veronica Mars, but right now costume designer Salvador Perez's sartorial prowess is focused on one Mindy Kaling. The industry-renowned designer has spent over twenty years creating quirky, exquisite, and above all, iconic looks for Hollywood productions, and his current project is perhaps the designer's most memorable yet.

Mindy Lahiri, title character of the hit Fox television show, is a whimsical, brainy gynecologist with a purse addiction and an uber-feminine style sensibility, qualities which have been developed as a collaboration between the Kaling and Perez over the series' three seasons. Between dreaming up ensembles to match Kaling's fanciful style and mapping out the actress's red carpet looks, Perez sat down with me to discuss how exactly one becomes an indispensable Hollywood costumer. Here are seven nuggets of sartorial wisdom from the costume master himself.

1. FIT IS ABSOLUTELY ESSENTIAL (AND NON-NEGOTIABLE)

Perez takes pride in the fact that Kaling now insists on tailoring her off-duty clothing in addition to her red carpet wares and TMP wardrobe. "So much of what I do is fit," Perez explains, "Because my background is sewing. Since I can sew, we've made [Mindy] look polished and I think that's a luxury not everybody has. Even her scrubs are fitted to her. I think anybody can look polished and put-together if they put the effort into fit. "

Perez notes that when he stepped in as costume designer for the show, Kaling eschewed floral patterns like the plague. Despite the common misconception of patterns emphasizing curves, Perez suggested the actress try a pop of pattern. The formerly floral-averse Kaling now embraces the print, and her character is often clad in blooming patterns.

3. BEAUTIFUL THINGS HAPPEN WHEN YOU VENTURE OUTSIDE THE BOX

After two decades on film and television sets, Perez has learned to nudge his clients past the boundaries of their comfort zones. The designer has found that some of his most adventurous and outlandish looks are now classic moments in wardrobe history, and some of his clients' favorite looks. Perez fondly recalled creating one of Mindy's now-iconic ensembles out of two separate tweed patterns in the form of a vest, pencil skirt, and tie, and added an additional pop of pattern underneath with a pink and red polka-dot blouse. Though the ensemble wouldn't necessarily be the first notion to pop into mind when one throws together a professional ensemble, the look worked like gangbusters.

4. INVEST IN A COLORFUL WINTER COAT

According to Perez, there is a dearth of colorful winter coats in New York City — and indeed, most regions of the country. Kaling's TMP character, on the other hand, wears beautifully rendered coats in emerald, saffron, and crimson, pieces which Perez believes give her character spirit and individuality.

5. UTILITARIAN PIECES ARE CHIC, TOO

Perez styled several of Mindy's resident nurses with classic Baby-G watches, a sturdy and utilitarian style if there ever was one. Little did the designer know that Baby-G watches are in fact favored by women with intensive jobs in medicine and similarly high-impact careers. On the subject of the Baby-G, Salvador explains, "I think they're a fun, functional accessory. Tamara on The Mindy Project wears them with her scrubs... and I just found out one of the biggest users of the watch is the service industry, because they're so durable."

6. DON'T STYLE YOUR CLOTHES AS THEY LOOKED ON THE MANNEQUIN... OR IN THE LOOKBOOK

Individualistic style is based upon a foundation of your personal creativity, so don't assume that a designer's wardrobe styling prowess is better than your own; in fact, it's simply different, a view which Perez wholeheartedly supports. "Social media gives costume designers a voice," Perez states. "[With Kate Spade clothing] I use the Kate Spade pieces in a different way than Kate had planned on it. So I think I'm adding my own layer to it." And to great effect, it seems.

7. YOUR BODY TYPE SHOULDN'T PROHIBIT YOU FROM WEARING YOUR FAVORITE STYLES

Certain clothing may be manufactured for a six-foot-tall size-zero; other styles were designed with a curvy, voluptuous silhouette in mind. However, Perez insists that by tailoring clothes properly based on his client's dimensions, they rock whatever styles they decide to sport on the red carpet or off. Rebel Wilson rocks her curves in brightly colored shifts, Kaling cuts a beautiful figure in beautifully saturated colors, and each of Perez's clients has hit more than a handful of sartorial high-notes no matter what their height or shape.