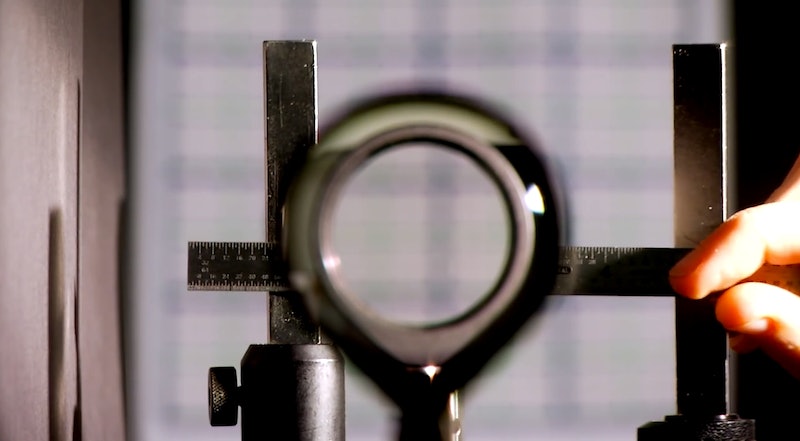 It may just be the wallflower in me talking, but of all the superpowers out there, I'd choose invisibility. Being able to be somewhere with no one knowing? Being able to disappear? Count me in. Still, until now, I've always accepted invisibility was one of those things I'd only get to dream about, like having J Law's mouth or or my own private moat. Except, no. Thanks to some brilliant scientists at the University of Rochester, we now have the Rochester Cloak, a cloaking device that makes objects invisible. And you can make one yourself, for under $100.Okay, okay, it's not quite Harry's invisibility cloak. It's actually an ingenious way of using ordinary lenses to bend light around an object so that it becomes hidden from view while keeping whatever's behind it perfectly visible. But it's awesome. The scientists used four lenses and some very precise mathematics (in order to figure out what type of lens to use and how powerful it should be) to create the world's first ever 3D, multi-directional cloaking mechanism— meaning, essentially, that you can move from side to side and the object will still be invisible. Said John Howell, professor of physics at the university.

There've been many high tech approaches to cloaking and the basic idea behind these is to take light and have it pass around something as if it isn't there, often using high-tech or exotic materials.

"From what we know, this is the first cloaking device that provides three-dimensional, continuously multidirectional cloaking," added Joseph Choi, who helped develop the device.

The cool thing is that, though their own device uses only small lenses — and therefore only hides relatively small things from sight — it can be as big as the biggest lenses. Meaning that, in theory at least, really large objects could also be rendered invisible. But its more exciting uses come in fact from being able to hide smaller things; for example, a surgeon could "look through his hands to what he is actually operating on," Howell told ECN. Choi added:

I imagine this could be used to cloak a trailer on the back of a semi-truck so the driver can see directly behind him. It can be used for surgery, in the military, in interior design, art.

Best of all? You can actually make a mini, simplified version of the device yourself — all you need is a spare $100 to spend on two sets lenses with different focal strengths and an optics bench. Oh, and some mean math skills wouldn't hurt, either.

More like this
How To Hide Cords Under A Desk
By Jenny White
This Is When Netflix Is Going To Start Charging You For Sharing Passwords
By Darshita Goyal
CASETiFY Vs. Otterbox Phone Cases: Which One Is Better?
By Lauren Moison
Ashamed Of Your Screen Time Stats? Here's How To Change That
By Alexis Morillo
Get Even More From Bustle — Sign Up For The Newsletter
From hair trends to relationship advice, our daily newsletter has everything you need to sound like a person who’s on TikTok, even if you aren’t.